Haverford Township (named after the town of Haverfordwest in Wales, UK) is a home rule township[1] in Delaware County, near Philadelphia, in southeastern Pennsylvania, United States, and is officially known as The Township of Haverford. Despite being under a home rule charter since 1977, it continues to operate under a Board of Commissioners divided into wards,[1] as do "First Class" townships that are still under the Pennsylvania Township Code. Haverford Township was founded in 1682 and incorporated in 1911.

Haverford Township contains portions of the communities of Haverford, Bryn Mawr, Ardmore, Drexel Hill, and Wynnewood. The unincorporated "town" of Havertown lies wholly within Haverford Township. The township population as of the 2010 census was 48,491.

Haverford, along with Upper Darby, Cheltenham, Lower Merion together form as the major inner ring suburbs of Philadelphia.

Haverford Township was laid out by William Penn as part of the Welsh Tract or Barony. In 1681, a representative group of Welsh Quakers met with Penn to discuss their settlement having purchased forty thousand acres of land which today comprises all of Haverford, Radnor and Lower Merion Townships. "Companies of Adventurers" were formed, with the most prominent person in each taking out the patent on 5,000 acres of land as trustee. The first three families arrived in Haverford Township in 1682. Lewis David, Henry Lewis and William Howell selected land along the southern border.

The two creeks that mark part of the township boundaries provided good millseats for the early settlers. On Darby Creek to the west, Richard Hayes Jr., David Morris and Samuel Lewis erected a gristmill, known as Haverford New Mill, in 1707. Later a sawmill was attached. This mill operated until 1904. Near the border with Marple Township, Humphrey Ellis operated a very early fulling mill. In 1807 Henry Lawrence built a sawmill on this site, and in 1832 his son, William, built a gristmill close by. The sawmill remained in the family ownership for more than 125 years, and is the oldest industry exant in Haverford Township.

Toward the eastern boundary, Cobb's Creek, called Karakung by the Native Americans, was the site of a number of mills. Haverford Mill was the first, a gristmill built by William Howell in 1658. Daniel Humphreys purchased the property in 1703 and built a sawmill and fulling and dyeing mill. These were added to Dennis Kelly's holding in 1826 and became the Castle Hill Mills. This site is just north of Eagle Road on the west bank of Cobb's Creek.

Israel Whelen, Sr., built the Nitre Hall Powder Mills on Cobb's Creek, which were in operation by 1810. During the American Revolution very little black powder was manufactured in this country, and it was needed for engineering and mining. Between 1810 and 1840 these mills were the second largest powder mills in the U.S. with production of 800,000 pounds in 1812. The mills ceased operations in 1840 and were sold to Dennis Kelly, who converted them for the manufacture of cotton and wooden goods.

In 1814, Dennis Kelly borrowed capital to purchase a mill-seat on Cobb's Creek. He erected a small wooden factory known as Clinton Mills. This was a highly successful venture and, after enlarging the mill, he built Cedar Grove Mill further downstream. Dennis Kelly provided material for the U.S. government from 1817 until 1860 with contracts ranging from $1,800.00 to $41,370.00. Improved transportation opened the township to development. The Philadelphia and Columbia Railroad opened for use from Broad and Callowhill Streets to Paoli in 1833, and went as far as Pittsburgh by 1835. Tracks meandered through the countryside, going along Railroad Avenue in Haverford Township. This was the first railway for general commerce in the U.S., but offered little in the way of service to passengers until the late 1860s. The Pennsylvania Railroad bought the Columbia in 1857 and began changing the roadbed for what became the Main Line to the west. 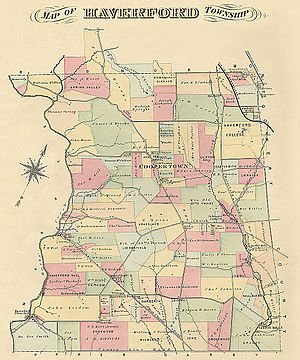 The population of Haverford Township almost doubled between 1900 and 1925.

In the beginning of the 20th Century much farmland was purchased by wealthy families who built mansions and developed gardens on their new estates. 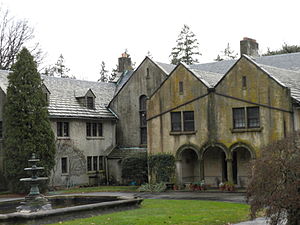 Several golf courses were developed. Merion Cricket Club Golf Association incorporated Clifton Hall an old farmhouse, in their clubhouse. They have 140 acres in the main course or East Course and 160 acres in the West Course. The Llanerch Country Club consists of 126 acres. The Pennsylvania Railroad Golf Club was established in 1925 on 109 acres bounded by Earlington Road, Manoa Road and City Line. This property was sold in 1943 to Warner West Corporation, which developed Chatham Park.

The first building erected for educational purposes was the Federal School, in 1797. During the 1800s four additional one-room schools and one parochial school were built. The latter part of the 19th century was the beginning of the present school system. After World War II, additions were made to existing schools, a new high school and three one-story elementary schools were built. Today there is one middle school, one senior high, five elementary schools, four parochial schools and four private schools. 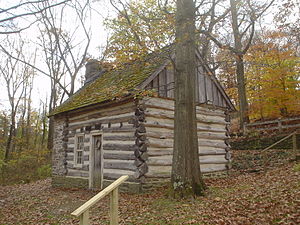 David Lawrence was one of the early Welsh settlers in Haverford Township. He emigrated with his wife Elinor Ellis and her family in 1684, and took up part of his father-in-law’s land grant. His son Henry Lawrence purchased 209 acres along Darby Creek in 1709. It has not been determined whether the log house predates this purchase, but a ​2 1⁄2-story stone addition was built c. 1730, and later a clapboard summer kitchen was added. It became known as the Three Generation House, and remained in Lawrence family ownership until 1942.[2] 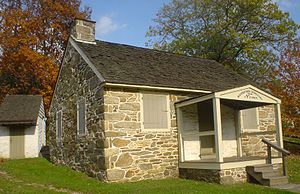 The first record of the purchase of land for a school in Haverford Township was October 29, 1797. Alexander Symington received 5 shillings for an irregularly shaped building lot of one quarter of an acre and three perches near the present day intersection of Darby and Coopertown Roads. Payment for the land was made by five trustees: Philip Sheaff, William Brook, Francis Lee, David Lyons and Benjamin Hayes Smith, "for the purpose of erecting a school thereon for the use of said Township of Haverford". The 1797 Federal School is on the National Register of Historic Places.[3] 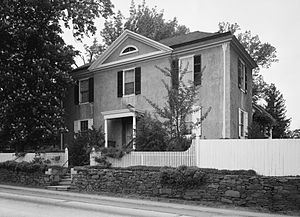 "Pont Reading House" is situated on the Easterly side of Haverford Road, Haverford Township, Delaware County, Pennsylvania, at the corner where the Ardmore Trolley passes en route between Brookline—Oakmont and Ardmore, and near Ardmore Junction Station of the Philadelphia and Western Railway. It was the home of Joshua Humphreys, the builder of the USS Constitution. Here, this beautiful specimen of early American homes still stands, in an excellent state of preservation and repair, as it has since 1813, when the front section was built and added to the middle three-story section erected 1730–60, which in turn was then added to the rear and original two-story structure, built possibly as early as 1683. One of the log walls of this first and original section can still be seen as one enters a door on one of the sides thereof, All surrounded and shaded with some large trees, of the original forest, still surviving.[4]

The Nitre Hall Powder Mills, which gave the valley its name, were built by Israel Whelen shortly after 1800. The young nation had growing needs for explosives, and the mills prospered with an output of 800,000 pounds during the War of 1812. Nitre Hall Mills produced a quality and quantity of black powder in the U.S. second only to the Dupont Mills on the Brandywine. After the powder mills closed in 1840, Dennis Kelly bought the property and converted the buildings to the manufacture of textiles. Nitre Hall is on the National Register of Historic Places.[5]

The Grange Estate, also known as Maen-Coch and Clifton Hall, is a historic mansion in Havertown, Pennsylvania, near Philadelphia, in Delaware County, Pennsylvania. Built in 1700 and expanded several times through the 1850s, it was purchased by Haverford Township in 1974. The building was added to the National Register of Historic Places in 1976 as The Grange.

According to the United States Census Bureau, the township has a total area of 10.0 square miles (26 km2), all of it land. The township is part of the Pennsylvania Main Line and of the Welsh Tract.

Haverford Township is a first-class township with 9 commissioners elected by ward.

A total of 6 men's Major Championships and 11 men's and women's US Amateur Championships, have been staged within Haverford Township. Bobby Jones completed his grand slam at Merion in 1930, Ben Hogan's comeback from a horrific car accident in the 1950 US Open staged at Merion. 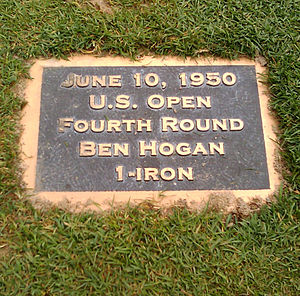 Dow Finsterwald finished ahead of Billy Casper and Sam Snead in 1958 at Llanerch, the first PGA Championship held after the format was switched from match play to stroke play. Lee Trevino defeated Jack Nicklaus in an 18-hole playoff in 1971 at Merion when he famously tossed a rubber snake at Nicklaus on the first tee on the day of the playoff. The US Open returned to Merion in 2013, and was won by Justin Rose.

The first recorded purchase of land for educational purposes in Haverford Township was made on October 28, 1797. A stone structure erected on a site along 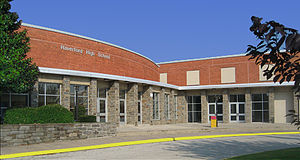 Darby Road at the crossroads Coopertown served as a school until 1872. Today, known as the Federal School, the building still stands and serves as a window to history for Haverford Township children. Every fourth-grade student spends a day at the Federal School learning what it was like to be a student in 1797.

Residents of Haverford Township benefit from a wide range of school supported services, including Adult Evening School; the Golden Age Program, the Senior Citizen Prom and the Tax-Aide Program for senior citizens; and Delaware County Community College courses for all residents. Haverford, which is a member of the Delaware County Chamber of Commerce and the Main Line Chamber of Commerce, maintains partnerships with local universities and colleges, businesses, service organizations, realtors, community groups and senior citizen organizations. In 1989, the 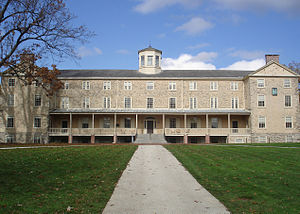 Haverford College is located within Haverford Township with a portion partially within Lower Merion Township, was the first College founded by the Society of Friends in the United States in 1833, has several historic structures on its 225-acre property. [2] Of the nation's 357 "best" colleges, the Princeton Review ranks Haverford as #6 for Best Overall Undergraduate Experience. In addition, Haverford, unlike many of its peers, is located within easy travel of a large metropolitan center and the opportunities that Philadelphia offers.[8]