A lap slide guitar is a guitar played on the lap with a slide or steel.

Lap slide guitars are generally one of three types:

The latter type are now the least common of the three types of lap slide guitars, despite having been developed before the lap steel and resonator guitars. Acoustic lap steel guitars are generally the quietest of the three; however, renewed interest in acoustic instruments in the 1990s associated with improving amplification techniques and interest in vintage and historical musical instruments has led to a resurgence in interest in the distinctive sound of these instruments. 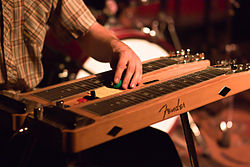 The most basic form of lap slide guitar is a regular acoustic guitar that has been modified for this purpose by either replacing the nut and bridge saddle with taller versions or by fitting a shim under the originals. This is done to raise the strings away from the fretboard. Regular guitar players keep the strings close to the fretboard to ensure ease of playing while lap slide players aim for the opposite by ensuring the strings never come into contact with the frets.

The most common form of lap slide guitar is the "Weissenborn" style. This kind of guitar takes its name from one of the original manufacturers and, as with the Dobro, the company's name has become a generic name for all guitars of this style.

This type of guitar is similar in appearance and construction to a regular acoustic guitar with one defining difference. The neck is square and hollow with the back and sides of the guitar not stopping at the joint between the neck and body (the heel) but continuing up to the headstock giving an increased volume due to the larger internal area of the sound chamber.

Playing a guitar laid flat and using a bar to slide up and down the strings has been common in the Hawaiian Islands for well over a century. The exact beginnings are unknown but it gained popularity as a playing style in America in the post war years when servicemen returning from stations in the Pacific brought this "new" idea with them.

Hawaiian guitar became something of a craze for a while. This encouraged manufacturers like Hermann C. Weissenborn and Chris J. Knutsen to develop their own instruments for the growing market. It is the surviving examples of these instruments that are the most coveted by players and that provide the most inspiration to current manufacturers.

Using a slide on a regular guitar has been documented from the early days of the blues. The composer W. C. Handy, whilst waiting at a train station in Mississippi, witnessed an unknown player who left a lasting impression on him. "As he played, he pressed a knife on the strings of the guitar in a manner popularized by Hawaiian guitarists who used steel bars. The effect was unforgettable." 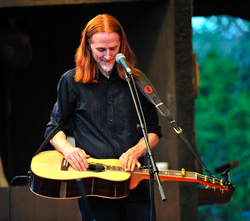 Lap slide guitars (and other lapslide instruments) are played in a different manner to the regular guitar. Instead of playing them upright and with the strings facing away from you, they are played laid flat either on the lap, on a stand or stool, or standing up using a guitar strap designed to accommodate the different angle. 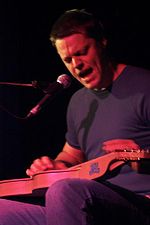 The term "object" is used because, although the majority of players use specifically manufactured slides, almost any suitable item can be used. The key to which objects can and can not be used is shape; The item must be easy to hold and have a rounded edge to apply to the strings, and material; usually metal, due to its high density.

Many players of standard slide guitar (that is to say not played on the lap) use glass, ceramic, steel or brass slides. Lap slide players prefer metal slides because the high action of the strings allow the use of a heavier slide for improved tone and sustain. Standard slide guitar players use slides that are of the bottleneck design and worn over one finger. Lap slide, Dobro, lap steel and pedal steel players generally use solid bars made from machined steel coated with chrome, hence the term "steel guitar".

As with all styles of slide guitar, standard tuning is uncommon, most players preferring to use open tuning.

As previously stated, lap slide players can use a bar style slide rather than the standard style sliders that are restricted to bottleneck style sliding. Improved tone and volume are one benefit. It is also more suited to various techniques that are more difficult with a guitar held in the normal position. It is much easier to play melodies on strings other than the top one or two strings, it is easier to bar the lower strings whilst leaving the top strings open, and it is easier to slant the bar for more complex chord sounds.

The proponents of either style may argue the case either way. Some players choose one style or the other, while others employ both styles.