Haymanot (Ge'ez: ሃይማኖት) is the branch of Judaism practiced by the Beta Israel.

Haymanot in both Ge'ez and Amharic is the regular word meaning "religion" or "faith". Thus in modern Amharic, it is common to speak of the Christian Haymanot, the Jewish Haymanot or the Muslim Haymanot. It is also a common girl's name meaning "Faith" for members of all three religions in Ethiopia. It is only in Israel where the Ge'ez term haymanot is associated with a particular religion.

Mäṣḥafä Kedus (Holy Scriptures) is the name for the religious literature. The language of the writings is Ge'ez. The holiest book is the Orit (from Aramaic "Oraita" - "Torah") which consists of the Five Books of Moses and the books Joshua, Judges and Ruth. The rest of the Bible has secondary importance. Sources are lacking on whether the Book of Lamentations is excluded from the canon, or whether it forms part of the Book of Jeremiah as it does in the Orthodox Tewahedo biblical canon.[citation needed]

Deuterocanonical books that also make up part of the canon are Sirach, Judith, Esdras 1 and 2, Meqabyan, Jubilees, Baruch 1 and 4, Tobit, Enoch and the testaments of Abraham, Isaac and Jacob. 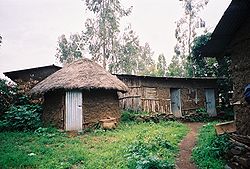 Synagogue in the village of Wolleka in Ethiopia. 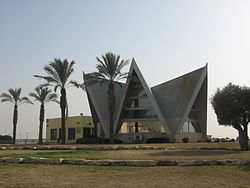 Modern Synagogue in the city of Netivot in Israel.

Ethiopian Jews were forbidden to eat the food of non-Jews. A Kes only eats meat he has slaughtered himself, which his hosts then prepare both for him and themselves. Beta Israel who broke these taboos were ostracized and had to undergo a purification process. Purification included fasting for one or more days, eating only uncooked chickpeas provided by the Kes, and ritual purification before entering the village. Unlike other Ethiopians, the Beta Israel do not eat raw meat dishes like kitfo or gored gored.[1]

The Beta Israel calendar is a lunar calendar of 12 months, each 29 or 30 days alternately. Every four years there has been a leap year which added a full month (30 days). The calendar is a combination of the ancient calendar of Alexandria Jewry, Book of Jubilees, Book of Enoch, Abu Shaker and the Ge'ez calendar.[2] The years are counted according to the Counting of Kushta "1571 to Jesus Christ, 7071 to the Gyptians and 6642 to the Hebrews",[3] according to this counting the year 5771 (Hebrew: ה'תשע"א‎) in the Rabbinical Hebrew calendar is the year 7082 in this calendar.

Holidays in the Haymanot [4] divided into daily, monthly and annually. The annual holiday by month are: 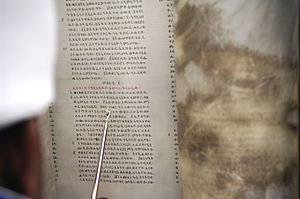 Kahen reading from the Orit. 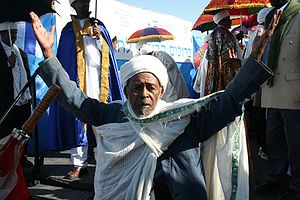 A Kahen celebrating the holiday of Sigd in Jerusalem, 2008.