Hazleton is a city in Luzerne County, Pennsylvania, United States. The population was 21,340 at the 2015 census, had decrease of 9.6% from the 2013 census. Hazleton is the 17th largest city in Pennsylvania.[1]

During the height of the American Revolution in the summer of 1780, British sympathizers, known as Tories, concentrated from New York's Mohawk Valley, began attacking the outposts of American revolutionaries located along the Susquehanna River Valley in Northeast Pennsylvania. Because of the reports of Tory activity in the region, Captain Daniel Klader and a platoon of 41 men from Northampton County were sent to investigate. They traveled north from the Lehigh Valley along a path known as "Warrior's Trail", which is present-day State Route 93, since this route connects the Lehigh River in Jim Thorpe (formerly known as Mauch Chunk) to the Susquehanna River in Berwick.

Heading north, Captain Klader's men made it as far north as present-day Conyngham when they were ambushed by members of the Seneca tribe and Tory militiamen. In all, 15 men were killed on September 11, 1780 in what was known the Sugarloaf Massacre.

The Moravians, a Christian denomination, had been using "Warrior's Trail" since the early 18th century after the Moravian missionary Nicolaus Ludwig Zinzendorf first used it to reach the Wyoming Valley. This particular stretch of "Warrior's Trail" had an abundance of hazel trees. Though the Moravians called the region "St. Anthony's Wilderness", it eventually became known as "Hazel Swamp", a name which had been used previously by the Indians.

The Moravian missionaries were sent from their settlements in Bethlehem to the site of the Sugarloaf Massacre to bury the dead soldiers. Because of the aesthetic natural beauty of the Conyngham Valley, some Moravians decided to stay and in 1782, built a settlement, St. Johns, along the Nescopeck Creek, which is near the present-day intersection of Interstates 80 and 81.[2]

In the late 18th and early 19th centuries, the "Warrior Trail" was widened and became the Berwick Turnpike. Later, a road was built to connect Wilkes-Barre to McKeansburg. This road intersected with the Berwick Turnpike at what is present-day Broad and Vine Streets, in downtown Hazleton. An entrepreneur named Jacob Drumheller decided that this intersection was the perfect location for a rest-stop, so in 1809, he built the first building in what would be later known as Hazleton. Though a few buildings and houses began to be built nearby, the area remained a dense wilderness for about 20 more years. Aside from small-scale logging, the area offered little else. Jacob Drumheller is buried at Conyngham Union Cemetery. 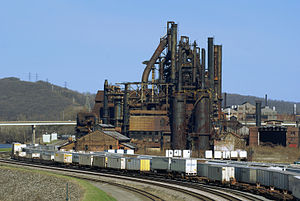 Anthracite coal mined from Hazleton was shipped via the Lehigh Canal to Bethlehem Steel Corporation during the American Industrial Revolution.

Railroad developers from Philadelphia became interested in the Hazleton area once previous rumors were validated that in 1818 anthracite coal deposits had been discovered in nearby Beaver Meadows by prospectors Nathaniel Beach and Tench Coxe.

A young engineer from New York named Ariovistus "Ario" Pardee was hired to survey the topography of Beaver Meadows and report the practicality of extending a railroad from the Lehigh River Canal in Jim Thorpe to Beaver Meadows. Pardee, knowing that the area of Beaver Meadows was already controlled by Coxe and Beach, bought many acres of the land in present-day Hazleton. The investment proved to be extraordinarily lucrative. The land contained part of a massive anthracite coal field. Pardee will be forever known as the founding father of Hazleton.[citation needed]

Pardee incorporated the Hazleton Coal Company in 1836, the same year that the rail link to the Lehigh Valley market was about to be completed.

The coal industry attracted many immigrants for labour, mostly German and Irish in the 1840s and 1850s, and mostly Italian, Polish, Russian, Lithuanian, Slovak and Montenegrins in the 1860s to 1920s.

The coal mined in Hazleton helped to establish the United States as a world industrial power, primarily fueling the massive blast furnaces at the Bethlehem Steel Corporation.[3]

Many small company towns, often referred to by locals as "patch towns" or "patches" surrounded Hazleton and were built by coal companies to provide housing for the miners and their families. These include:

File:Lattimer massacre.jpg
Mine workers began their protest march near Harwood and many were eventually killed by the Luzerne County sheriff in Lattimer in 1897.

Hazleton was incorporated as a borough on January 5, 1857. Its intended name was supposed to be spelled "Hazelton" but a clerk misspelled the name during incorporation, and the name "Hazleton" has been used ever since. The borough's first fire company, the Pioneer Fire Company, was organized in 1867 by soldiers returning from the American Civil War. Hazleton was incorporated as a city on December 4, 1891. The population then was estimated to be around 14,000 people.

In 1891, Hazleton became the third city in the United States to establish a city-wide electric grid.

On September 10, 1897, the Lattimer Massacre occurred near Hazleton.

After World War II, the demand for coal began to decline as cleaner, more efficient fuels were being used. Readily available, cheap energy helped open the door for manufacturing. The Duplan Silk Corporation opened and became the world's largest silk mill.[4] The garment industry thrived and was invested in by New York mobster Albert Anastasia.[citation needed]

In 1947, Autolite Corporation was looking to expand operations in the East, and had been looking into Hazleton. Officials from Autolite came to the area to survey it and in their report, they noted Hazleton is a "mountain wilderness" with no major water route, rail route, trucking route, or airport. In response, several area leaders gathered to address these problems.

CAN-DO (Community Area New Development Organization) was formally organized in 1956 by founder Dr. Edgar L. Dessen. Their main goal was to raise money, through their "Dime A Week" campaign, in which area residents were encouraged to put a dime on their sidewalk each week to be collected by CANDO. The company raised over $250,000 and was able to purchase over 500 acres (2.0 km2) of land, which was converted into an industrial park. Because of CANDO's efforts, Hazleton was given the All-America City Award in 1964. Hazleton's economy is now based largely on manufacturing and shipping, facilitated by the relative closeness to Interstates 80 and 81.

An article published in December 2002 by U.S. News & World Report was entitled "Letter from Pennsylvania: A town in need of a tomorrow" which reported Hazleton's shortcomings to the world. It was criticized by local politicians and business leaders alike, and again prompted local leaders to address the problems facing the community.

Changing demographics and a new wave of immigrants

In 2006, Hazleton gained national attention as Republican mayor Lou Barletta and council members passed the Illegal Immigration Relief Act.[5] This ordinance was instituted to discourage hiring or renting to illegal immigrants. Initially, the ordinance levied an administrative fine on landlords for $100.00 per illegal immigrant rented to and a loss of permits for non-compliance.[6] Another act passed concurrently made English the official language of Hazleton.[7]

Mayor Lou Barletta of Hazleton estimated that as "many as half" of the estimated 10,000 Hispanics who were living in Hazleton left Hazleton when the ordinance was passed.[8] The issue was covered by the television program 60 Minutes in 2006[9] and the Fox News show The O'Reilly Factor in March 2007.[10]

The ordinance was criticized as illegal and unconstitutional. A number of residents (landlords, business owners, lawful aliens defined as illegal under the act, and unlawful aliens)[11][12][13] filed suit to strike down the law, claiming it violates the Supremacy Clause of the U.S. Constitution as well as the First and Fourteenth Amendments to the Constitution. After a trial and several appeals including a remand from the Supreme Court, the Third Circuit found the ordinance invalid due to federal preemption.[14]

According to the United States Census Bureau, the city has a total area of 6.0 square miles (16 km2), all of it land.

Hazleton is located 12 miles (19 km) north of Tamaqua and 30 miles (48 km) south of Scranton/Wilkes-Barre. Located in Pennsylvania's ridge and valley section on a plateau named Spring Mountain, Hazleton's highest elevation is 1886 feet above sea level, one of the highest incorporated cities east of the Mississippi River and the highest incorporated city in Pennsylvania. It straddles the divide between the Delaware and Susquehanna River watersheds.

File:Downtown hazleton pa.jpg
Panoramic view of Hazleton overlooking Downtown and the southern section of the city.

All of Hazleton's major mining and garment industries have disappeared over the past 50 years. Through the efforts of CANDO and a practical highway infrastructure, Hazle Township's Humboldt Industrial Park has become home to many industries. Coca-Cola, American Eagle Outfitters, Hershey, Office Max, Simmons Bedding Company, Michaels, Network Solutions, AutoZone, General Mills, WEIR Minerals, EB Brands and Amazon.com[24] are just some of the large companies with distribution, manufacturing, or logistic operations in Hazleton.

The first school was built in the 1830s by the Hazleton Coal Company. It was a private elementary school at the corner of Church and Green Streets, the present-day site of Hazleton City Hall. Hazleton High School, the first high school, was built in 1875 at Pine and Hemlock Streets, the present-day site of the Pine Street Playground. Bishop Hafey High School, the Vikings, was Hazleton's only Roman Catholic High School, owned by the Diocese of Scranton. It was opened in 1971 and closed in 2007 by the order of former Bishop Joseph F. Martino.

The Hazleton Area School District encompasses 300 square miles (780 km2), which is one of the largest school districts in the state. It includes 1 city, 6 boroughs, 9 townships, (16 municipalities) and 3 counties. Enrollment is currently over 10,000 students. In 2014, the Hazleton Area High School was the 11th largest high school in the state.

The schools of the Hazleton Area School District are:

Public transportation is provided by the Hazleton Public Transit, a service of the City of Hazleton's Department of Public Services. HPT operates nine routes throughout the city and neighboring communities.

While Hazleton currently has no passenger rail service, it is a major regional center for commercial rail traffic, operated by Norfolk Southern Railway.

Three Interstate highways run outside the Hazleton area, with associated exits to the city.

Hazleton's annual street festival, Funfest, is celebrated usually during the second weekend of September. The festival includes a craft show, a car show, entertainment from local bands, and many games of chance. The Funfest parade is held on Sunday during the Funfest weekend. Valley Day is celebrated in Conyngham during the first weekend of August. Many church festivals, including the Festival of the Madonna del Monte at Most Precious Blood Roman Catholic Church in Hazleton, is celebrated to preserve the Italian heritage of Hazleton. This is honored by carrying candle houses (cintis) by men up and down the streets of the eastern side of town, from the church to the Key Club, which is located on Monges Street.

Hazleton was a long-time home to minor baseball. On April 14, 1934, the Philadelphia Phillies entered into an affiliation agreement with the New York–Penn League Hazleton Mountaineers. This was the first ever minor league affiliation for the Phillies.[30] The last minor-league club to play in Hazleton was the Hazleton Dodgers in 1950, a Brooklyn Dodgers farm-club which played in the Class D North Atlantic League.[31]

Hazleton's modest skyline is remarkable for a city its size. Almost unaffected by examples of modern architecture, it provides an interesting window on American urbanism prior to World War II.

Hazleton has several sister cities. They are: