Head of the Ohio 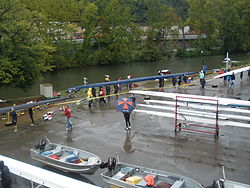 The Head of the Ohio, also known as HOTO, is a rowing race held on the penultimate complete weekend of October each year on the Ohio River and Allegheny River, at Pittsburgh, Pennsylvania. The race is named the "Head" of the Ohio because it is a head race. It is the largest 2-day regatta on the Inland Rivers System, with more than 2,000 athletes rowing from over 75 universities, colleges and high schools. The regatta was the seventh largest in both 2006 and 2007.

The last races of the Regatta are generally the most prestigious: Championship 4s, and Championship 8s (both men and women). Championship sculling events (1x/single and 2x/double) race on Saturday afternoon. The Championship events usually include current U.S. National Team athletes.

The 2.6 mile course starts just below the Fort Duquesne Bridge at the confluence of the Allegheny, Monongahela, and Ohio rivers and between PNC Park and Heinz Field across from downtown Pittsburgh. The finish line is on the Allegheny River just downriver from the 40th Street Bridge. The actual start is on Washington's Landing at the TRRA boathouse. However, in 2015, the race course was changed to be downstream, with the starting line at the top of Washington's Landing and the finish line just past the Fort Duquesne Bridge, near Point State Park. Rowers will pass 8 bridges while racing on this particular stretch of the Allegheny.

The Head of the Ohio began in 1987 with Mercy Hospital as its major sponsor but since 2006 has been coordinated solely through the Three Rivers Rowing Association. The first race was held during five hours on Saturday September 26, 1987. The most recent race was held October 4, 2014.