For other uses, see headgear. 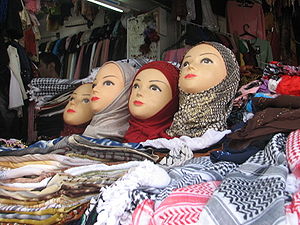 Women's headscarves for sale in Jerusalem

Headscarves or head scarves are scarves covering most or all of the top of a woman's hair and her head, leaving the face uncovered. Headscarves may be worn for a variety of purposes, such as for warmth, for sanitation, for fashion or social distinction; with religious significance, to hide baldness, out of modesty, or other forms of social convention.[1][2]

Some English speakers use the word "babushka" (the word for 'grandma' in Russian:

бaбушка (help·info)) to indicate the headscarf tied below the chin, as commonly worn in Europe, especially by elderly women in Russia. In many parts of Europe and the Balkan region, headscarves are used mainly[citation needed] by elderly women and this led to the use of the term "babushka", a Slavic word meaning 'grandmother'.

Headscarves may also be tied behind the head.

Some types of head coverings that Russian women wear are: circlet, veil, and wimple.

Headscarves may specifically have a religious significance or function. For instance, in some branches of Judaism, married women are required to cover their hair with scarves, known as tichels or snoods, in compliance with the code of modesty known as tzniut. These head-coverings come in different shapes and sizes. Tichel is a veil where it covers all the hair and towards the back of the head the left over veil is made into a bun. Snoods and tzniut belong to almost the same style and are worn more like a hat.

Headscarves and veils are commonly used by observant Muslim women and girls, and required by law for women and girls in certain Muslim countries (Saudi Arabia for example). The Muslim religious dress varies, and various cultures include burqa, chador, niqab, dupatta, or others. The Arabic word hijab, which refers to modest behaviour or dress in general, is often used to describe the headscarf worn by Muslim women and girls. Hijab also symbolizes that a Muslim women is married and that she has been sanctified to one man and designates her as off-limits to all other men.[3]

In countries with large Eastern Orthodox Christianity population such as Russia[4] headscarves and veils are used by Christian women in the Eastern Orthodox Church, Oriental Orthodox Church, Assyrian Church of the East, and Roman Catholic Church.[5][6][7] A few years back, all women in Russia who attended Divine Liturgy wore head-coverings. A women having her head covered means that she honors the Lord. Head-coverings also symbolizes that a woman is married and that her husband is the head of the family. Little girls also have their heads covered when they go to Mass at church, not because they are married, but in order to honor the Lord. Today, young Russian Orthodox women and little girls still cover their heads when going to church, but with a different type of headscarf: Mantilla, which is a silk or lace scarf. Nowadays only woman of older age (grandmothers) wear full head coverings.