From Infogalactic: the planetary knowledge core
(Redirected from Health and fitness)
Jump to: navigation, search 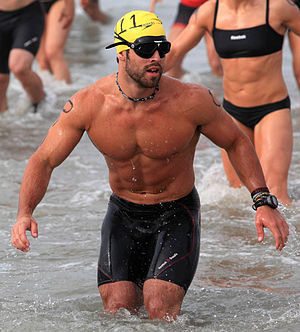 Physical fitness is a general state of health and well-being and, more specifically, the ability to perform aspects of sports, occupations and daily activities. Physical fitness is generally achieved through proper nutrition,[1] moderate-vigorous physical exercise, physical activity,[2] and sufficient rest.[3]

Before the industrial revolution, fitness was defined as the capacity to carry out the day’s activities without undue fatigue. However, with automation and changes in lifestyles physical fitness is now considered a measure of the body's ability to function efficiently and effectively in work and leisure activities, to be healthy, to resist hypokinetic diseases, and to meet emergency situations.[4]

Fitness is defined[by whom?] as the quality of being suitable to perform a particular task. Around 1950, perhaps consistent with the Industrial Revolution and the treatise of World War II, the term "fitness" increased in western vernacular by a factor of ten.[5] Modern definition of fitness describe either a person or machine's ability to perform a specific function or a holistic definition of human adaptability to cope with various situations. This has led to an interrelation of human fitness and attractiveness which has mobilized global fitness and fitness equipment industries. Regarding specific function, fitness is attributed to personnel who possess significant aerobic or anaerobic ability, i.e. strength or endurance. A holistic definition of fitness is described by Greg Glassman in the CrossFit journal as an increased work capacity across broad times and modal domains; mastery of several attributes of fitness including strength, endurance, power, speed, balance and coordination and being able to improve the amount of work done in a given time with any of these domains.[6] A well rounded fitness program will improve a person in all aspects of fitness, rather than one, such as only cardio/respiratory endurance or only weight training. 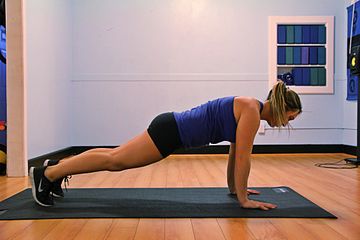 A woman performs plank exercise for strengthening of muscles

A comprehensive fitness program tailored to an individual typically focuses on one or more specific skills,[7] and on age-[8] or health-related needs such as bone health.[9] Many sources[10] also cite mental, social and emotional health as an important part of overall fitness. This is often presented in textbooks as a triangle made up of three points, which represent physical, emotional, and mental fitness. Physical fitness can also prevent or treat many chronic health conditions brought on by unhealthy lifestyle or aging.[11] Working out can also help some people sleep better and possibly alleviate some mood disorders in certain individuals.[12]

Developing research has demonstrated that many of the benefits of exercise are mediated through the role of skeletal muscle as an endocrine organ. That is, contracting muscles release multiple substances known as myokines which promote the growth of new tissue, tissue repair, and various anti-inflammatory functions, which in turn reduce the risk of developing various inflammatory diseases.[13]

Specific or task-oriented fitness is a person's ability to perform in a specific activity with a reasonable efficiency: for example, sports or military service. Specific training prepares athletes to perform well in their sports. 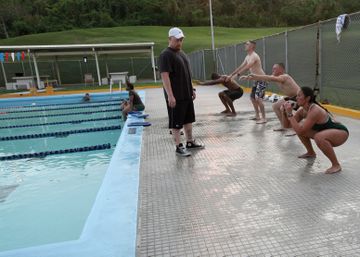 Swimmers perform squats prior to entering the pool in a U.S. military base, 2011

In order for physical fitness to benefit the health of an individual, an unknown response in the person called a stimulus will be triggered by the exertion. When exercise is performed with the correct amount of intensity, duration and frequency, a significant amount of improvement can occur. The person may overall feel better but the physical effects on the human body take weeks or months to notice and possibly years for full development. For training purposes, exercise must provide a stress or demand on either a function or tissue. To continue improvements, this demand must eventually increase little over an extended period of time. This sort of exercise training has three basic principles: overload, specificity, and progression. These principles are related to health but also enhancement of physical working capacity.[21]

High Intensity Interval Training consists of repeated, short bursts of exercise, completed at a high level of intensity. These sets of intense activity are followed by a predetermined time of rest or low intensity activity.[22] Studies have shown that exercising at a higher intensity has increased cardiac benefits for humans, compared to when exercising at a low or moderate level.[23] When your workout consists of an HIIT session, your body has to work harder to replace the oxygen it lost. Research into the benefits of HIIT have revealed that it can be very successful for reducing fat, especially around the abdominal region. Furthermore, when compared to continuous moderate exercise, HIIT proves to burn more calories and increase the amount of fat burned post- HIIT session.[24] Lack of time is one of the main reasons stated for not exercising; HIIT is a great alternative for those people because the duration of an HIIT session can be as short as 10 minutes, making it much quicker than conventional workouts.[25]

Cardiovascular capacity can be measured using VO2 max, a measure of the amount of oxygen the body can uptake and utilize.[26] Cardiorespiratory training involves movement that increases the heart rate to improve the body's oxygen consumption. This form of exercise is an important part of all training regiments ranging from professional athletes to the everyday person. Also, it helps increase stamina.

Centers for disease control and prevention provide lifestyle guidelines of maintaining a balanced diet and engaging in physical activity to reduce the risk of disease. The WCRF/ American Institute for Cancer Research (AICR) published a list of recommendations that reflect the evidence they have found through consistency in fitness and dietary factors that directly relate to Cancer prevention.

The WCRF/AICR recommendations include the following:

These recommendations are also widely supported by the American Cancer Society. The guidelines have been evaluated and individuals that have higher guideline adherence scores substantially reduce cancer risk as well as help towards control with a multitude of chronic health problems. Regular physical activity is a factor that helps reduce an individual’s blood pressure and improves cholesterol levels, two key components that correlate with heart disease and Type 2 Diabetes.[31] The American Cancer Society encourages the public to "adopt a physically active lifestyle" by meeting the criteria in a variety of physical activities such as hiking, swimming, circuit training, resistance raining, lifting, etc. It is understood that cancer is not a disease that can be cured by physical fitness alone, however because it is a multifactorial disease, physical fitness is a controllable prevention. The large associations tied with being physically fit and reduced cancer risk are enough to provide a strategy to reduce cancer risk.[30] The American Cancer Society assorts different levels of activity ranging from moderate to vigorous to clarify the recommended time spent on a physical activity. These classifications of physical activity consider the intentional exercise and basic activities done on a daily basis and give the public a greater understanding by what fitness levels suffice as future disease prevention.

Physical activity affects one’s blood pressure, cholesterol levels, blood lipid levels, blood clotting factors and the strength of blood vessels. All factors that directly correlate to cardiovascular disease. It also improves the body’s use of insulin. People who are at risk for diabetes, Type 2 (insulin resistant) especially, benefit greatly from physical activity because it activates a better usage of insulin and protects the heart. Those who develop diabetes have an increased risk of developing cardiovascular disease. In a study where a sample of around ten thousand adults from the Third National Health and Nutrition Examination Survey, physical activity and metabolic risk factors such as insulin resistance, inflammation, dyslipidemia were assessed. The study adjusted basic confounders with moderate/vigorous physical activity and the relation with CVD mortality. The results displayed physical activity being associated with a lower risk of CVD mortality that was independent of traditional metabolic risk factors.

Achieving resilience through physical fitness promotes a vast and complex range of health related benefits. Individuals who keep up physical fitness levels generally regulate their distribution of body fat and stay away from obesity. Abdominal fat, specifically visceral fat, is most directly affected by engaging in aerobic exercise. Strength training has been known to increase the amount of muscle in the body, however it can also reduce body fat.[39] Sex steroid hormones, insulin, and an appropriate immune response are factors that mediate metabolism in relation to the abdominal fat. Therefore, physical fitness provides weight control through regulation of these bodily functions.[40]

Regular exercise is effective for preventing the age-related decline in cognition and improving overall neuropsychological function. The increased synthesis of neurotrophic factors in the body and brain and the resulting neurogenesis in various brain structures is largely responsible for these effects. Exercise also has persistent antidepressant effects and has been found to serve as both a means to prevent and treat drug addictions, particularly psychostimulant addictions.

Menopause is the term that is used to refer to the stretch of both before and after a woman's last menstrual cycle. there are an instrumental amount of symptoms connected to menopause, most of which can affect the quality of life of the women involved in this stage of her life. One way to reduce the severity of the symptoms is exercise and keeping a healthy level of fitness. Pre or during menopause as the women body changes there can be physical, physiological or internal changes to the body. These changes can be prevented or the reduced with the use of regular exercise. these changes include;[41]

-Prevention of weight gain: around menopause women tend to lose their muscle mass and have it replaced with abdominal fat. Slight increases in physical exercise can help to prevent this.

-Reduce the risk of breast cancer: due to the weight loss from regular exercise it may offer protection from breast cancer.

-Strengthen the bones of the body: Physical activity can slow the bone loss after menopause reducing the chance of bone fractures and osteoporosis.

-Reduce the risk of disease: Excess weight can increase the risk of heart disease and type 2 diabetes, and the regular physical activity can counter these effects.

-Boost the mood: By being involved in regular activities it can improve the psychological health, this can be the case at any age and not only for times during or after menopause.[42]

The Melbourne Women’s Midlife Health Project provided evidence that showed over an eight-year time period 438 were followed. even though the physical activity was not associated with VMS in this cohort at the beginning. women that reported they were physically active everyday at the beginning were 49% less likely to have reported bothersome hot flushes. this in contrast to women who level of activity decreased were more likely to experience bothersome hot flushes.[43]