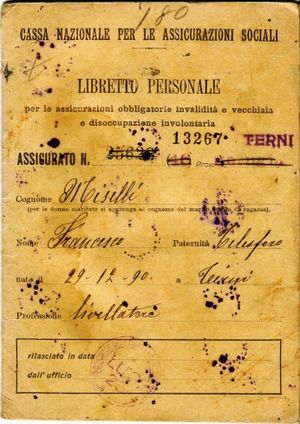 An old social insurance card (dated 1921) belonging to the Istituto Nazionale della Previdenza Sociale, which makes sure that workers are not injured from work, and if they are, that they are insured.

For information regarding Italy's healthcare system, see Healthcare in Italy

Italy is known for its generally very good health, considering the fact that it has the world's 2nd highest life expectancy in 2013 (according to World Health Organization[1]), low infant mortality, relatively healthy cuisine and diet, and healthcare system that is ranked 2nd according to World Health Organization[2] and which has the third best medical performance worldwide.[3] As with any developed country, Italy has adequate and sufficient water and food distribution, and levels of nutrition and sanitation are high.

Italy has a good and sufficient water supply, yet, especially due to droughts, common in the summer (notably in Southern Italy), water shortages can frequently occur.[4] Italians consume a very high amount of mineral water, the highest compared to equivalent neighbours: in 1992, the average person in Italy drank 116 litres, compared to 105 in Belgium, 93 in Germany and 80 in France. According to studies, 18 million people in Italy annually are confronted with at least one slight water shortage, and 18% of Italian families have been recorded as having irregular distribution patterns.[4] Some water distribution is also uneven, and can be explained by economic factors; for example, people in Lombardy, Italy's richest region, drink nine times more bottled water than Campania, one of the country's poorest.[4]

Italy's nutritious and generally healthy cuisine ensures that Italians are well-nourished and eat good food. The relatively recent addition of several drugs to meats has meant that controls have increased from 4,000 in 1988 to 56,831 in 1991.[4]

Being a relatively warm and sunny country, Italians are often exposed to direct radiation from the sun (ultraviolet radiation), which, if not protected from sun cream or block, can create carcinogenic skin diseases, such as skin cancer. Despite this, the greatest risk from exposure to radiation is found indoors.[4]