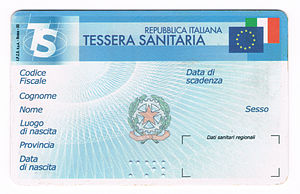 Healthcare spending in Italy accounted for 9.2% of GDP in 2012 (about $3,200 per capita) of which about 77% is public,[1] slightly lower than the average of 9.3% in OECD countries.[2] In 2000 Italy's healthcare system was regarded, by World Health Organization's ranking, as the 2nd best in the world after France,[3] and according to the CIA World factbook, Italy has the world's 14th highest life expectancy.[4] Thanks to its good healthcare system, the life expectancy at birth in Italy was 82.3 years in 2012, which is over two years above the OECD average.[2]

After World War II Italy (re-)established its social security system including a social health insurance administered by sickness funds. In the 1970s the social health insurance faced several equity problems as coverage differed between the sickness funds and around 7% of the population remained uninsured. Moreover, sickness funds went practically bankrupt by the mid-1970s. Due to growing public dissatisfaction with the existing healthcare system, Italian policymakers fostered a structural reform. In 1978, the government established the SSN (Servizio Sanitario Nazionale) — the Italian version of a National Health Service — including universal coverage and tax funding.[5] 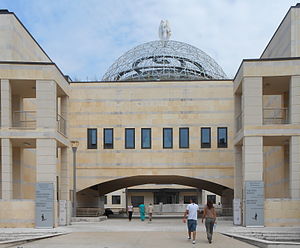 San Raffaele Hospital in Milan is one of the best hospitals in Italy for quality of care provided[citation needed].

Healthcare is provided to all citizens and residents by a mixed public-private system. The public part is the national health service, Sistema sanitario nazionale (SSN), which is organized under the Ministry of Health and is administered on a regional basis.

Family doctors are entirely paid by the SSN, must offer visiting time at least five days a week and have a limit of 1500 patients. Patients can choose and change their GP, subjected to availability.

Prescription drugs can be acquired only if prescribed by a doctor. If prescribed by the family doctor, they are generally subsidized, requiring only a copay that depends on the medicine type and on the patient income (in many regions all the prescribed drugs are free for the poor). Over-the-counter drugs are paid out-of-pocket. Both prescription and over-the-counter drugs can only be sold in specialized shops (farmacia). In a sample of 13 developed countries Italy was sixth in its population weighted usage of medication in 14 classes in 2009 and fifth in 2013. The drugs studied were selected on the basis that the conditions treated had high incidence, prevalence and/or mortality, caused significant long-term morbidity and incurred high levels of expenditure and significant developments in prevention or treatment had been made in the last 10 years. The study noted considerable difficulties in cross border comparison of medication use.[6]

Visits by specialist doctors or diagnostic tests are provided by the public hospitals or by conventioned private ones, and if prescribed by the family doctor require only a copay (of the order of $40 for a visit without any diagnostic test) and are free for the poor. Waiting times are usually up to a few months in the big public facilities and up to a few weeks in the small conventioned private facilities, though the referring doctor can shorten the waiting times of the more urgent cases by prioritising them.[7] Patients, however, can opt for the "free market" option, provided by both public and private hospitals, which is paid completely out-of-pocket and has generally much shorter[citation needed] waiting times.

Surgeries and hospitalization provided by the public hospitals or by conventioned private ones are completely free of charge for everyone, regardless of the income. For planned surgery waiting times can be up to many months, especially in the big cities.

The Italian National Outcomes Programme permits measurement of variation in the quality and outcomes of care by region, which is very considerable. So, for example, the proportion of patients receiving coronary angioplasty within 48 hours of a heart attack varies from about 15% in the southern regions of Marche, Molise and Basilicata to nearly 50% in the northern regions Valle d’Aosta and Liguria. Measured at Local Health Authority level the levels varied between 5% and more than 60%. This geographic variability was the greatest of any of the 11 countries studied by the OECD. There is evidence of patient movement, generally from south to north, probably driven, at least in part, by a search for better quality. [8]