The Constitution of the Russian Federation provides all citizens the right to free healthcare under Mandatory Medical Insurance in 1996. In 2008, 621,000 doctors and 1.3 million nurses were employed in Russian healthcare. The number of doctors per 10,000 people was 43.8, but only 12.1 in rural areas. The number of general practitioners as a share of the total number of doctors was 1.26 percent. There are about 9.3 beds per thousand population - nearly double the OECD average.

Expenditure on healthcare was 6.5% of Gross Domestic Product, US$957 per person in 2013. About 48% comes from government sources. About 5% of the population, mostly in major cities, have health insurance.[1]

Healthcare in the Soviet Union 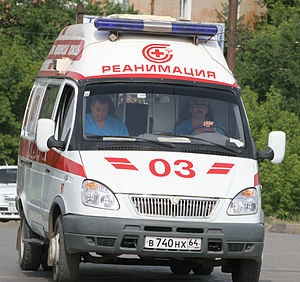 Pre-1990s Soviet Russia had a totally socialist model of health care - the Semashko system with a centralised, integrated, hierarchically organised with the government providing state-funded health care to all citizens. All health personnel were state employees. Control of communicable diseases had priority over non-communicable ones. On the whole, the Soviet system tended to primary care, and placed much emphasis on specialist and hospital care.

The integrated model achieved considerable success in dealing with infectious diseases such as tuberculosis, typhoid fever and typhus. The effectiveness of the model declined with underinvestment, with the quality of care beginning to decline by the early 1980s, though in 1985 the Soviet Union had four times the number of doctors and hospital beds per head compared with the USA.[2] Overall, the quality of Soviet medical care was low by developed world standards. Many medical treatments and diagnoses were unsophisticated and substandard (with doctors often making diagnoses by interviewing patients without conducting any medical tests), the standard of care provided by healthcare providers was poor, and there was a high risk of infection from surgery. The Soviet healthcare system was plagued by shortages of medical equipment, drugs, and diagnostic chemicals, and lacked many medications and medical technologies available in the Western world. Its facilities had low technical standards, and medical personnel underwent mediocre training and had no financial incentives to improve performance. Soviet hospitals also offered poor hotel amenities such as food and linen. Special hospitals and clinics existed for the nomenklatura which offered a higher standard of care, but which was still often below Western standards.[3][4][5]

Despite a doubling in the number of hospital beds and doctors per capita between 1950 and 1980, the lack of money that had been going into health was patently obvious. Some of the smaller hospitals had no radiology services, and a few had inadequate heating or water. A 1989 survey found that 20% of Russian hospitals did not have piped hot water and 3% did not even have piped cold water. 7% did not have a telephone. 17% lacked adequate sanitation facilities. Every seventh hospital and polyclinic needed basic reconstruction. Five years after the reforms described below per capita spending on health care was still a meagre US$158 per year (about 8 times less than the average European social models in Spain, the United Kingdom and Finland, and 26 times that of the U.S. which spent US$4,187 at that time).[6] 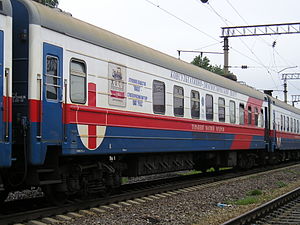 The new Russia has changed to a mixed model of health care with private financing and provision running alongside state financing and provision. Article 41 of the 1993 constitution confirmed a citizen's right to healthcare and medical assistance free of charge.[7] This is achieved through compulsory medical insurance (OMS) rather than just tax funding. This and the introduction of new free market providers was intended to promote both efficiency and patient choice. A purchaser-provider split was also expected to help facilitate the restructuring of care, as resources would migrate to where there was greatest demand, reduce the excess capacity in the hospital sector and stimulate the development of primary care. Finally, it was intended that insurance contributions would supplement budget revenues and thus help to maintain adequate levels of healthcare funding.

The OECD reported[citation needed] that unfortunately, none of this has worked out as planned and the reforms have in many respects made the system worse. The population’s health has deteriorated on virtually every measure. Though this is by no means all due to the changes in health care structures, the reforms have proven to be woefully inadequate at meeting the needs of the nation. Private health care delivery has not managed to make many inroads and public provision of health care still predominates.

The resulting system is overly complex and very inefficient. It has little in common with the model envisaged by the reformers. Although there are more than 300 private insurers and numerous public ones in the market, real competition for patients is rare leaving most patients with little or no effective choice of insurer, and in many places, no choice of health care provider either. The insurance companies have failed to develop as active, informed purchasers of health care services. Most are passive intermediaries, making money by simply channelling funds from regional OMS funds to healthcare providers.

According to Mark Britnell the constitutional right to healthcare is "blocked by opaque and bureaucratic systems of planing and regulation", reimbursement rates which do not cover providers costs and high levels of informal payment to secure timely access. There is a "mosaic" of federal and state level agencies responsible for managing the public system. [8] 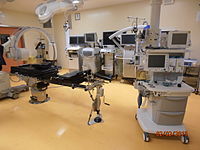 Federal Center for Neurosurgery in Tyumen 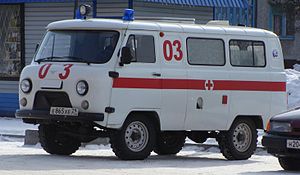 Starting 2000, there was significant growth in spending for public healthcare[9] and in 2006 it exceed the pre-1991 level in real terms.[9] Also life expectancy increased from 1991-93 levels, infant mortality rate dropped from 18.1 in 1995 to 8.4 in 2008.[10] Russian Prime Minister Vladimir Putin announced a large-scale health-care reform in 2011 and pledged to allocate more than 300 billion rubles ($10 billion) in the next few years to improve health care in the country.[11] He also said that obligatory medical insurance tax paid by companies for compulsory medical insurance will increase from current 3.1% to 5.1% starting from 2011.[11]

In May 2012 Putin signed the May Decrees which included a plan to double the wages of healthcare staff by 2018 and gradual privatisation of state health services. In November 2014 the wage rises in Moscow led to the closure of 15 hospitals and 7000 redundancies.[12]

Since 1996 government health facilities have been allowed to offer private services, and since 2011 some private providers have been providing services to the state-insured. The private sector in Moscow has expanded rapidly. One chain, Doktor Ryadom, treats half its patients under the official insurance scheme at low cost and the other half privately at a profit.[13]

In an effort to stem Russia’s demographic crisis, the government is implementing a number of programs designed to increase the birth rate and attract more migrants to alleviate the problem. The government has doubled monthly child support payments and offered a one-time payment of 250,000 Rubles (around US$10,000) to women who had a second child since 2007.[14]

In 2006, the Minister of Health Mikhail Zurabov and Deputy Chairman of the State Duma Committee for Health Protection Nikolai Gerasimenko proposed reinstating the Soviet-era tax on childlessness, which ended in 1992.[15] So far, it has not been reinstated.[15]