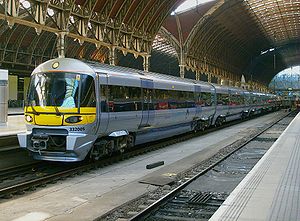 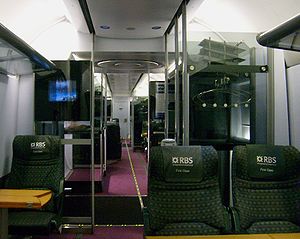 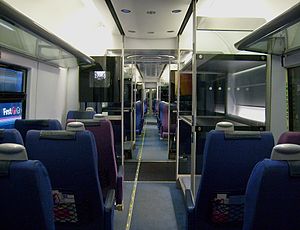 Heathrow Express was planned as a joint venture between BAA and British Rail, but was taken over fully by the former following the railways being privatised.[1]

Construction began in 1993. The principal works were two 5-mile single-bore tunnels (including eight escape shafts) and underground stations at Heathrow Central and Terminal 4. Electrification of the Great Western Main Line (GWML) between Paddington and Airport Junction, where the new line diverged from the GWML, was also required. A flying junction known as Stockley Flyover was constructed to connect the tunnel to the GWML fast lines.

Beginning in January 1998, an interim service called Heathrow FastTrain ran to a temporary station called Heathrow Junction, where a coach took passengers the rest of the way. The full service began on 23 June 1998, with four trains per hour running in each direction, operated using Siemens Class 332 electric multiple units.

In 2005, a service called Heathrow Connect was started, operating a twice-hourly stopping service along the route using Class 360 Desiro EMUs.[1] In 2008, Heathrow Express was diverted to serve the new Terminal 5 in lieu of Terminal 4.[1]

Heathrow Airport Holdings have an agreement with Network Rail until 2023 for access paths on the GWML.[2]

Trains depart Paddington every 15 minutes from 05.10 until 23.25, and there is a similar quarter-hourly service in the return direction. At Paddington they use dedicated platforms 6 and 7, although on occasions other platforms are used. There are two stops at Heathrow: Heathrow Central, serving Terminals 1, 2 and 3 (journey time from Paddington 15 minutes); and Heathrow Terminal 5 (journey time 21 minutes). Until the opening of Terminal 5 on 27 March 2008, Heathrow Express terminated at Heathrow Terminal 4, this is now served by the 'Heathrow Express shuttle' from Heathrow Central.

The service uses Class 332 electric multiple units built by CAF/Siemens. These incorporate video monitors and the ability to use mobile phones throughout the journey, even in tunnels. The monitors are mostly used for advertising and for news and weather updates produced by Sky News. Prior to April 2010 news content was provided by BBC World News.

Heathrow Express has been generally well received, not least because steps were taken to reduce the environmental impact, including disguising ventilation shafts as barns. The service has received some criticism, however, particularly of its high fares. As of Summer 2013, all units have undergone a complete refurbishment inside and out including new seating configurations, luggage storage and at-seat power.

Tickets can be purchased at the two Heathrow Airport stations, Paddington, from ticket sellers in the arrivals halls at all terminals, on board the train, online or using mobile applications for BlackBerry, Android, iPhone, and iPad devices.[3]

There is also a stopping service, Heathrow Connect, which takes the same route but using the slower relief lines, on which significantly lower fares are charged. This takes approximately 15 minutes longer than Heathrow Express, but offers connections to the London Underground Central and District lines at Ealing Broadway.

In 2010, introduced a dedicated shuttle between Heathrow Central and Terminal 4 that would be timed to connect with the main Heathrow Express service to/from Terminal 5 to improve connections between the terminals.[4]

Airport workers can get a discount through the Airport Commuter scheme operated by Heathrow Airport Holdings.

Performance for the first quarter of the 2013 financial year was 94.0% PPM (Public Performance Measure), meaning that percentage of trains arrived at their destination within 5 minutes of the scheduled time.

The service runs along Network Rail's Great Western Main Line from Paddington to Airport Junction. The line from Airport Junction to the airport terminals is owned by Heathrow Airport Holdings but maintained by Network Rail. The line is electrified at 25 kV AC overhead and uses Automatic Train Protection (ATP). The controlling signalbox for the entire route is the Thames Valley Signalling Centre (TVSC) in Didcot.