The Heavy Airlift Wing (HAW) is an international military airlift organization based at Pápa Air Base, Hungary. It was officially activated on 27 July 2009 as part the Strategic Airlift Capability consortium.[1] The consortium purchased and operates three C-17 Globemaster III aircraft that fly under the national markings of Hungary. To date the Heavy Airlift Wing is commanded by a colonel from the United States. Boeing provides nearly all operational maintenance of the aircraft with a contractor force, while depot maintenance and crew training is provided by the USAF in the United States.

The wing has provided strategic airlift worldwide on combat, humanitarian, disaster relief, and peacekeeping missions for its 12 member countries. While independent of any command by the European Union, United Nations, or NATO, many of the missions by consortium members have been in support of objectives of those organizations, primarily in strategic airlift support of the International Security Assistance Force in Afghanistan. The wing has also flown into Iraq, Mali, Kosovo, Ukraine and Lebanon.[2]

The HAW is composed of 145 military and civilian personnel from the 12 participating nations. Strategic Airlift Capability nations send their personnel to work for the Heavy Airlift Wing on temporary or permanent positions.

The leadership positions of the Heavy Airlift Wing are manned by the member nations with the biggest share of flight hours in the SAC program, the United States, Sweden, the Netherlands and Norway.[3]

Colonel Trevor W. Nitz of the United States Air Force is the Commander of the Heavy Airlift Wing.

Colonel Bjørn Gohn-Hellum of the Royal Norwegian Air Force is the Vice Commander of the HAW.

Senior Master Sergeant Jerry S. Glover of the United States Air Force is the Senior Enlisted Advisor of the HAW.

The Command Staff is led by the HAW Chief of Command Staff with HAW Quality Manager overseeing the Quality Assurance and Safety sections.

The Heavy Airlift Wing Command and Control Squadron (C2S) is the focal point for all interaction within the HAW and between wing and the SAC nations regarding their operational airlift requirements.[3]

The function of the C2S is to receive operational requirements for airlift from nations and convert them into actionable mission taskings.The C2S ensures that the requested missions are executable politically and that the desired payload is transportable by air.

It also defines the mission priority and helps to set the Required Delivery Date. C2S works in close cooperation with SAC support organization NATO Airlift Management Programme Office, Pápa Air Base and the Boeing team in Pápa to make sure that all the operational, administrational and technical support are there to make the airlift mission happen.

C2S staff is divided into three sections; Mission Planning and Execution, Diplomatic Clearance and Administrative Support. It is also especially multinational as seven of the twelve SAC nations (Hungary, the Netherlands, Norway, Poland, Romania, Slovenia, and Sweden) are represented in the personnel of the C2S. 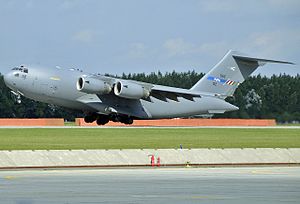 One of the C-17s operated by the Heavy Airlift Squadron

The Heavy Airlift Squadron (HAS) is the world's first and only multinational C-17 operations squadron.[3]

HAS's heritage is rooted in the training, policies and standards of the US mobility system that is the basis of operations of the United States Air Force, the main user of the C-17.

The HAS has also adapted the best practices of C-17 sister squadrons in the USAF, Royal Canadian Air Force, Royal Australian Air Force and the United Kingdom's Royal Air Force.

The squadron structure, policies and procedures are designed to operate in support of the Strategic Airlift Capability nations’ strategic policies to include combat and humanitarian airlift wherever and whenever they require it.

The HAS flight crews have a varied background of flying and working with cargo aircraft, fighter jets and helicopters in their national militaries. Apart from the US personnel, none of them have C-17 training before joining the HAW.

After C-17 training has been carried out both in the United States and in Pápa, HAS aircrews are capable of reaching a high level of skill in utilizing the various capabilities of the aircraft.

Currently the HAS is the only C-17 Foreign Military Sales (FMS) unit that is trained and capable of performing the entire spectrum of C-17 Airland and Airdrop Mission Capabilities.

Additionally, a minimum of 50 percent of the HAS Aircraft Commanders can carry out Air Refueling missions. Thereare also two aircrews capable of Single Ship Airdrop of Heavy Equipment (HE), Container Delivery System (CDS) pallets and Personnel (PERS) at all times.

The Logistics Support Squadron (LSS) is in charge of providing the Heavy Airlift Wing with a variety of functions. It consists of sections for Maintenance, Supply, Aerial Port and Life Support.[3]

LSS Flying Crew Chiefs (FCCs), specialists of aircraft maintenance, travel with the C-17s as a part of the crew to perform maintenance at en-route locations. Vehicle Management ensures that SAC vehicles are in top condition for licensed drivers to use. The LSS Supply works in conjunction with the Boeing Company to ensure parts and support equipment are available to the aircraft maintainers, both at home station as well as en-route. LSS Life Support ensures that Aircrew Flight Equipment is maintained for the safety of the aircrew.

LSS Aerial Port ensures safe loading and unloading of passengers and cargo at home station and ensures compliance with Dangerous Goods Regulations at all aerial ports where SAC C-17s pick up cargo from.

In addition to all these items, LSS works continuously with Pápa Air Base and the civilian authorities of Hungary on many support issues such as fuels, ground transportation, customs and other services.