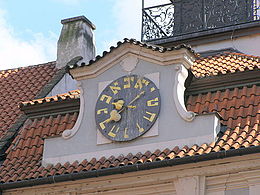 The lower clock on the Jewish Town Hall building in Prague, with Hebrew numerals in counterclockwise order.

The system of Hebrew numerals is a quasi-decimal alphabetic numeral system using the letters of the Hebrew alphabet. The system was adopted from that of the Greek numerals in the late 2nd century BC; it is also known as the Hebrew alphabetic numerals to contrast with earlier systems of writing numerals used in classical antiquity. These systems were inherited from usage in the Aramaic and Phoenician scripts, attested from c. 800 BC in the so-called Samaria ostraca and sometimes known as Hebrew-Aramaic numerals, ultimately derived from the Egyptian Hieratic numerals.

The Greek system was adopted in Hellenistic Judaism and had been in use in Greece since about the 5th century BC. [1]

In Israel today, the decimal system of Arabic numerals (ex. 0, 1, 2, 3, etc.) is used in almost all cases (money, age, date on the civil calendar). The Hebrew numerals are used only in special cases, such as when using the Hebrew calendar, or numbering a list (similar to a, b, c, d, etc.), much as Roman numerals are used in the West.

Cardinal and ordinal numbers must agree in gender (masculine or feminine; mixed groups are treated as masculine) with the noun they are describing. If there is no such noun (e.g. a telephone number or a house number in a street address), the feminine form is used. Ordinal numbers must also agree in number and definite status like other adjectives. The cardinal number precedes the noun (ex. shlosha yeladim), except for the number one which succeeds it (ex. yeled ehad). The number two is special - shnayim (m.) and shtayim (f.) become shney (m.) and shtey (f.) when followed by the noun they count. For ordinal numbers (numbers indicating position) greater than ten the cardinal is used.

The Hebrew numeric system operates on the additive principle in which the numeric values of the letters are added together to form the total. For example, 177 is represented as קעז which corresponds to 100 + 70 + 7 = 177.

Mathematically, this type of system requires 27 letters (1-9, 10-90, 100-900). In practice the last letter, tav (which has the value 400) is used in combination with itself and/or other letters from kof (100) onwards, to generate numbers from 500 and above. Alternatively, the 22-letter Hebrew numeral set is sometimes extended to 27 by using 5 sofit (final) forms of the Hebrew letters.[2]

By convention, the numbers 15 and 16 are represented as ט״ו‎ (9 + 6) and ט״ז‎ (9 + 7), respectively, in order to refrain from using the two-letter combinations י-ה‎ (10 + 5) and י-ו‎ (10 + 6), which are alternate written forms for the Name of God in everyday writing. In the calendar, this manifests every full moon, since all Hebrew months start on a new moon.

Combinations which would spell out words with negative connotations are sometimes avoided by switching the order of the letters. For instance, 744 which should be written as תשמ״ד‎ (meaning "you/it will be destroyed") might instead be written as תשד״מ or תמש״ד (meaning "end to demon").

Gershayim (U+05F4 in Unicode, and resembling a double quote mark) (sometimes erroneously referred to as merkha'ot, which is Hebrew for double quote) are inserted before (to the right of) the last (leftmost) letter to indicate that the sequence of letters represents a number rather than a word. This is used in the case where a number is represented by two or more Hebrew numerals (e.g., 28 → כ״ח‎).

Similarly, a single Geresh (U+05F3 in Unicode, and resembling a single quote mark) is appended after (to the left of) a single letter to indicate that the letter represents a number rather than a (one-letter) word. This is used in the case where a number is represented by a single Hebrew numeral (e.g., 100 → ק׳‎).

Note that Geresh and Gershayim merely indicate "not a (normal) word." Context usually determines whether they indicate a number or something else (such as "abbreviation").

In print, Hindu-Arabic numerals are employed in Modern Hebrew for most purposes. Hebrew numerals are used nowadays primarily for writing the days and years of the Hebrew calendar; for references to traditional Jewish texts (particularly for Biblical chapter and verse and for Talmudic folios); for bulleted or numbered lists (similar to A, B, C, etc., in English); and in numerology (gematria).

Use of final letters

The Hebrew numeral system has sometimes been extended to include the five final letter forms—ך, ם, ן, ף and ץ—which are then used to indicate the numbers from 500 to 900.

Thousands are counted separately, and the thousands count precedes the rest of the number (to the right, since Hebrew is read from right to left). There are no special marks to signify that the “count” is starting over with thousands, which can theoretically lead to ambiguity, although a single quote mark is sometimes used after the letter. When specifying years of the Hebrew calendar in the present millennium, writers usually omit the thousands (which is presently 5 [ה]), but if they do not this is accepted to mean 5 * 1000, with no ambiguity. The current Israeli coinage includes the thousands.[clarification needed]

To see how today's date in the Hebrew calendar is written, see, for example, Hebcal date converter.

The Abjad numerals are equivalent to the Hebrew numerals up to 400. The Greek numerals differ from the Hebrew ones from 90 upwards because in the Greek alphabet there is no equivalent for Tsadi (צ).