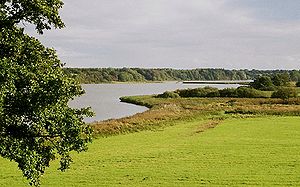 Site of the former town of Hedeby. 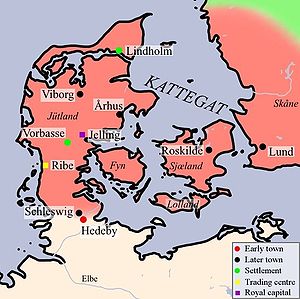 Map of Viking Denmark with Hedeby at the southern edge. 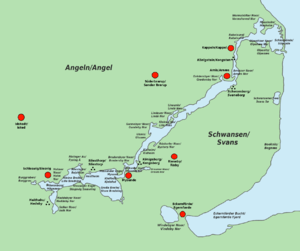 Bilingual map of the Schlei (German and Danish placenames)

Hedeby (Danish pronunciation: [ˈheːð̩byːˀ], Old Norse Heiðabýr, German Haithabu or Haddeby) was an important trading settlement in the Danish-northern German borderland during the Viking Age. It flourished from the 8th to the 11th centuries.

The site is located towards the southern end of the Jutland Peninsula. It developed as a trading centre at the head of a narrow, navigable inlet known as the Schlei, which connects to the Baltic Sea. The location was favorable because there is a short portage of less than 15 km to the Treene River, which flows into the Eider with its North Sea estuary, making it a convenient place where goods and ships could be ported overland for an almost uninterrupted seaway between the Baltic and the North Sea and avoid a dangerous and time-consuming circumnavigation of Jutland, providing Hedeby with a role similar to later Lübeck.

Hedeby was the second largest Nordic city during the Viking Age, after Uppåkra in southern Sweden,[1] and used to be the oldest city in Denmark until the site became part of Germany.[2]

The city of Schleswig was later founded on the other side of the Schlei, and gave the duchy its name. Old records mention two bridges connecting the two towns. Hedeby was abandoned after its destruction in 1066.

The site of Hedeby is located in the Duchy of Schleswig, which was traditionally the personal territory of the kings of Denmark. But the Kingdom of Denmark lost the area to Austria and Prussia in 1864 in the Second Schleswig War, and it is now in Germany. Hedeby is now by far the most important archaeological site in Schleswig-Holstein. The Haithabu Museum was opened next to the site in 1985.

Both in Viking times and in modern European languages, the names and spellings used for Hedeby have been varied and confusing.[3]

Ancient names for the nearby town of Schleswig are:

It is possible that the two names were used interchangeably for the same settlement, depending on which language was being used. However, the fact that two settlements came into existence very close together creates further difficulties. While the settlement today referred to as Hedeby/Haithabu lies on the south side of the Schlei inlet, the settlement that grew up at around the same time on the north side has had a continuous history of habitation to modern times, and has now grown into the town known as Schleswig and given its name to the surrounding province. 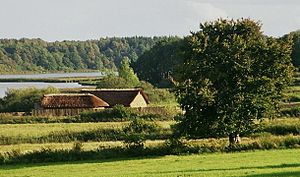 Hedeby is first mentioned in the Frankish chronicles of Einhard (804) who was in the service of Charlemagne, but was probably founded around 770. In 808 the Danish king Godfred (Lat. Godofredus) destroyed a competing Slav trade centre named Reric, and it is recorded in the Frankish chronicles that he moved the merchants from there to Hedeby. This may have provided the initial impetus for the town to develop. The same sources record that Godfred strengthened the Danevirke, an earthen wall that stretched across the south of the Jutland peninsula. The Danevirke joined the defensive walls of Hedeby to form an east-west barrier across the peninsula, from the marshes in the west to the Schlei inlet leading into the Baltic in the east.

The town itself was surrounded on its three landward sides (north, west, and south) by earthworks. At the end of the 9th century the northern and southern parts of the town were abandoned for the central section. Later a 9-metre (29-ft) high semi-circular wall was erected to guard the western approaches to the town. On the eastern side, the town was bordered by the innermost part of the Schlei inlet and the bay of Haddebyer Noor.

Hedeby became a principal marketplace because of its geographical location on the major trade routes between the Frankish Empire and Scandinavia (north-south), and between the Baltic and the North Sea (east-west). Between 800 and 1000 the growing economic power of the Vikings led to its dramatic expansion as a major trading centre.

The following indicate the importance achieved by the town:

A Swedish dynasty founded by Olof the Brash is said to have ruled Hedeby during the last decades of the 9th century and the first part of the 10th century. This was told to Adam of Bremen by the Danish king Sweyn Estridsson, and it is supported by three runestones found in Denmark. Two of them were raised by the mother of Olof's grandson Sigtrygg Gnupasson. The third runestone, discovered in 1796, is from Hedeby, the Stone of Eric (Swedish: Erikstenen). It is inscribed with Norwegian-Swedish runes. It is, however, possible that Danes also occasionally wrote with this version of the younger futhark.

Life was short and crowded in Hedeby. The small houses were clustered tightly together in a grid, with the east-west streets leading down to jetties in the harbour. People rarely lived beyond 30 or 40, and archaeological research shows that their later years were often painful due to crippling diseases such as tuberculosis.[citation needed] Yet make-up for men and rights for women provide surprises to the modern understanding.[5]

Ibrâhîm ibn Ya`qûb al-Tartushi, a late 10th-century traveller from al-Andalus, provides one of the most colourful and often quoted descriptions of life in Hedeby. Al-Tartushi was from Cordoba in Spain, which had a significantly more wealthy and comfortable lifestyle than Hedeby. While Hedeby may have been significant by Scandinavian standards, Al-Tartushi was unimpressed:

"Slesvig (Hedeby) is a very large town at the extreme end of the world ocean.... The inhabitants worship Sirius, except for a minority of Christians who have a church of their own there.... He who slaughters a sacrificial animal puts up poles at the door to his courtyard and impales the animal on them, be it a piece of cattle, a ram, billygoat or a pig so that his neighbors will be aware that he is making a sacrifice in honor of his god. The town is poor in goods and riches. People eat mainly fish which exist in abundance. Babies are thrown into the sea for reasons of economy. The right to divorce belongs to the women.... Artificial eye make-up is another peculiarity; when they wear it their beauty never disappears, indeed it is enhanced in both men and women. Further: Never did I hear singing fouler than that of these people, it is a rumbling emanating from their throats, similar to that of a dog but even more bestial."[6]

The town was sacked in 1050 by King Harald Hardrada of Norway during a conflict with King Sweyn II of Denmark. He set the town on fire by sending several burning ships into the harbour, the charred remains of which were found at the bottom of the Schlei during recent excavations. A Norwegian skald, quoted by Snorri Sturluson, describes the sack as follows:

Burnt in anger from end to end was Hedeby [..]
High rose the flames from the houses when, before dawn, I stood upon the stronghold's arm[7]

In 1066 the town was sacked and burned by East Slavs.[citation needed] Following the destruction, Hedeby was slowly abandoned. People moved across the Schlei inlet, which separates the two peninsulas of Angeln and Schwansen, and founded the town of Schleswig.

After the settlement was abandoned, rising waters contributed to the complete disappearance of all visible structures on the site. It was even forgotten where the settlement had been. This proved to be fortunate for later archaeological work at the site. 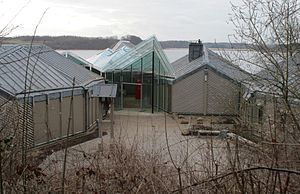 View of the Viking Museum

Archaeological work began at the site in 1900 after the rediscovery of the settlement. Excavations were conducted for the next 15 years. Further excavations were carried out between 1930 and 1939. Archaeological work on the site was productive for two main reasons: that the site had never been built on since its destruction some 840 years earlier, and that the permanently waterlogged ground had preserved wood and other perishable materials. After the Second World War, in 1959, archaeological work was started again and has continued intermittently ever since. The embankments surrounding the settlement were excavated, and the harbour was partially dredged, during which the wreck of a Viking ship was discovered. Despite all this work, only 5% of the settlement (and only 1% of the harbour) has as yet been investigated.

The most important finds resulting from the excavations are now on display in the adjoining Haithabu Museum. 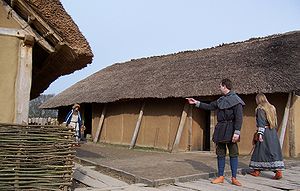