From Infogalactic: the planetary knowledge core
Jump to: navigation, search
This article is about the spiny mammal. For other uses, see Hedgehog (disambiguation).

A hedgehog is any of the spiny mammals of the subfamily Erinaceinae, in the eulipotyphlan family Erinaceidae. There are seventeen species of hedgehog in five genera, found through parts of Europe, Asia, and Africa, and in New Zealand by introduction. There are no hedgehogs native to Australia, and no living species native to the Americas (the extinct genus Amphechinus was once present in North America). Hedgehogs share distant ancestry with shrews (family Soricidae), with gymnures possibly being the intermediate link, and have changed little over the last 15 million years.[2] Like many of the first mammals, they have adapted to a nocturnal way of life.[3] Hedgehogs' spiny protection resembles that of the unrelated porcupines, which are rodents, and echidnas, a type of monotreme.

The name hedgehog came into use around the year 1450, derived from the Middle English heyghoge, from heyg, hegge ("hedge"), because it frequents hedgerows, and hoge, hogge ("hog"), from its piglike snout.[4] Other names include urchin, hedgepig and furze-pig. The collective noun for a group of hedgehogs is array.

Hedgehogs are easily recognized by their spines, which are hollow hairs made stiff with keratin.[5] Their spines are not poisonous or barbed and unlike the quills of a porcupine, do not easily detach from their bodies. However, the immature animal's spines normally fall out as they are replaced with adult spines. This is called "quilling". Spines can also shed when the animal is diseased or under extreme stress. 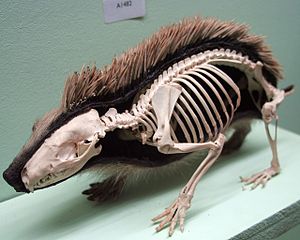 Close-up of the last 0.4 mm of a hedgehog spine in SEM

A defense that all species of hedgehogs possess is the ability to roll into a tight ball, causing all of the spines to point outwards.[5] The hedgehog's back contains two large muscles that control the position of the quills. When the creature is rolled into a ball, the quills on the back protect the tucked face, feet, and belly, which are not quilled. Since the effectiveness of this strategy depends on the number of spines, some desert hedgehogs that evolved to carry less weight are more likely to flee or even attack, ramming an intruder with the spines; rolling into a spiny ball for those species is a last resort. The various species are prey to different predators: while forest hedgehogs are prey primarily to birds (especially owls) and ferrets, smaller species like the long-eared hedgehog are prey to foxes, wolves, and mongooses.

Hedgehogs are primarily nocturnal, though some species can also be active during the day. Hedgehogs sleep for a large portion of the day under bushes, grasses, rocks, or most commonly in dens dug in the ground, with varying habits among the species. All wild hedgehogs can hibernate, though not all do, depending on temperature, species, and abundance of food.

Hedgehogs are fairly vocal and communicate through a combination of grunts, snuffles and/or squeals, depending on species. 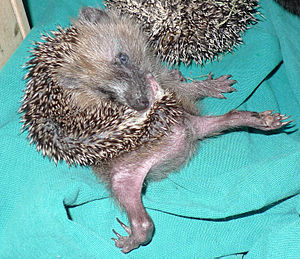 Hedgehogs occasionally perform a ritual called anointing.[6] When the animal encounters a new scent, it will lick and bite the source, then form a scented froth in its mouth and paste it on its spines with its tongue. The purpose of this habit is unknown, but some experts believe anointing camouflages the hedgehog with the new scent of the area and provides a possible poison or source of infection to predators poked by their spines. Anointing is sometimes also called anting because of a similar behavior in birds.

Like opossums, mice, and moles, hedgehogs have some natural immunity against some snake venom through the protein erinacin in the animal's muscular system, although it is only available in small amounts and a viper bite may still be fatal.[7] In addition, hedgehogs are one of four known mammalian groups with mutations that protect against another snake venom, α-neurotoxin. Pigs, honey badgers, mongooses, and hedgehogs all have mutations in the nicotinic acetylcholine receptor that prevent the snake venom α-neurotoxin from binding, though those mutations developed separately and independently.[8]

The olfactory regions have not been thoroughly studied in the hedgehog. In mammals, the olfactory part of the brain is covered by neopallium, making it difficult to expose. This difficulty is not impossible, as it varies from one species to another.[clarification needed] Tests have suggested that hedgehogs share the same electrical activity as cats.[9] 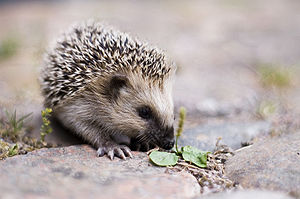 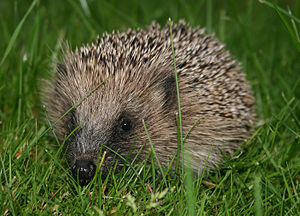 Depending on the species, the gestation period is 35–58 days. The average litter is 3–4 newborns for larger species and 5–6 for smaller ones. As with many animals, it is not unusual for an adult male hedgehog to kill newborn males.

Hedgehogs have a relatively long lifespan for their size. Larger species of hedgehogs live 4–7 years in the wild (some have been recorded up to 16 years), and smaller species live 2–4 years (4–7 in captivity), compared to a mouse at 2 years and a large rat at 3–5 years. Lack of predators and controlled diet contribute to a longer lifespan in captivity (8–10 years depending on size).

Hedgehogs are born blind with a protective membrane covering their quills, which dries and shrinks over the next several hours.[11] The quills emerge through the skin after they have been cleaned, or it falls off.[12]

Hedgehog bones have been found in the pellets of the European eagle owl.[13]

In Britain, the main predator is the badger. Hedgehogs in the UK have demonstrably[14] lower populations in areas where badgers are numerous, so that British hedgehog rescue societies will not release hedgehogs into known badger territories.[15] 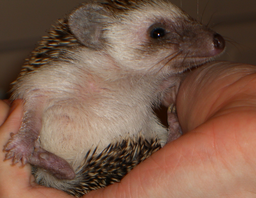 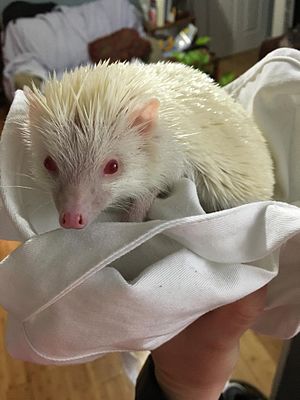 This hedgehog has no pigmentation due to a genetic mutation.

It is illegal to own a hedgehog as a pet in some US states and some Canadian municipalities, and breeding licenses are required. No such restrictions exist in most European countries with the exception of Scandinavia. In Italy, it is illegal to keep wild hedgehogs as pets.[16]

In areas where hedgehogs have been introduced, such as New Zealand and the islands of Scotland, the hedgehog has become a pest. In New Zealand it causes immense damage to native species including insects, snails, lizards and ground-nesting birds, particularly shore birds.[17] As with many introduced animals, it lacks natural predators.

Eradication can be troublesome. Attempts to eliminate hedgehogs from bird colonies on the Scottish islands of North Uist and Benbecula in the Outer Hebrides were met with international outrage. Eradication began in 2003 with 690 hedgehogs being killed. Animal welfare groups attempted rescues to save the hedgehogs. By 2007, legal injunctions against the killing of hedgehogs were put in place. In 2008, the elimination process was changed from killing the hedgehogs to trapping them and releasing them on the mainland.[18]

Hedgehogs suffer many diseases common to humans.[19] These include cancer, fatty liver disease and cardiovascular disease.

Cancer is very common in hedgehogs. The most common is squamous cell carcinoma. Squamous cell spreads quickly from the bone to the organs in hedgehogs, unlike in humans. Surgery to remove the tumors is rare because it would result in removing too much bone structure.

Hedgehogs uncommonly transmit a characteristic fungal skin infection to human handlers as well as other hedgehogs. This ringworm or dermatophytosis infection is caused by Trichophyton erinacei, which forms a distinct mating group within the Arthroderma benhamiae species complex.[20] 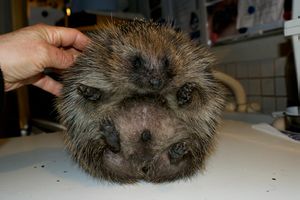 Hedgehogs can suffer from balloon syndrome, a rare condition in which gas is trapped under the skin as a result of injury or infection and which causes the animal to inflate; in 2017 the BBC reported a case in which a male hedgehog was "almost twice its natural size, literally blown up like a beach ball with incredibly taut skin".[21] The head vet at Stapeley's Wildlife Hospital, Bev Panto, said, "In my career I have seen three or four of these cases and they are very strange every time and quite shocking […] When you first see them they appear to be very big hedgehogs but when you pick them up they feel so light because they are mostly air".[22] She added that the condition was unique to hedgehogs because they have significant space under their skin as a result of their ability to curl up.[22] A similar case had been reported in 2013.[23] The British Hedgehog Preservation Society advises that:

There is no single cause for this condition. The air can be removed by incising or aspirating through the skin over the back. Antibiotic cover should be given. This may be associated with lung/chest wall damage or a small external wound acting like a valve or a clostridium type infection.[24]

As with most small mammals living around humans, cars pose a great threat to hedgehogs. Many are run over as they attempt to cross roadways. 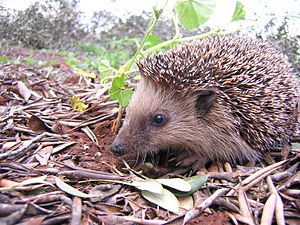 In Ireland, hedgehogs are one of the most common mammalian road fatalities. Between the years of April 2008 and November 2010 and a total of 50,430 km, there were 133 hedgehog fatalities. Of the 135 hedgehog carcasses collected from throughout Ireland, there were significantly more males than females collected, with peaks in male deaths occurring in May and June. Female deaths only outnumbered males in August, with further peaks in female deaths observed in June and July. It is suggested that these peaks are related to the breeding season (adults) and dispersal/exploration following independence.[25]

In 2006, McDonald's changed the design of their McFlurry containers to be more hedgehog-friendly.[26] Previously, hedgehogs would get their heads stuck in the container as they tried to lick the remaining food from inside the cup. Then, being unable to get out, they would starve to death. Domesticated hedgehogs display this behavior by getting their head stuck in tubes (commonly, lavatory paper tubes) and walking around with the tube on their head. Hedgehog owners often refer to this as "tubing" and promote the behavior by supplying clean tubes. Most owners are considerate enough, however, to cut the tubes lengthwise so as to prevent the hedgehog from remaining trapped against their will. Curiously though, some will still knowingly get themselves stuck for a few hours.[27]

Culinary and medicinal use

Hedgehogs are a food source in many cultures. Hedgehogs were eaten in Ancient Egypt and some recipes of the Late Middle Ages call for hedgehog meat.[29] Hedgehogs are traded throughout Eurasia and Africa for traditional medicine and witchcraft. In the Middle East and especially among Bedouins, hedgehog meat is considered medicinal, and thought to cure rheumatism and arthritis.[30] They are also said to cure a variety of illnesses and disorders from tuberculosis to impotence. In Morocco, inhaling the smoke of the burnt skin or bristles is a purported remedy for fever, male impotence, and urinary illnesses. The blood is sold as a cure for ringworm, cracked skin and warts and the flesh is eaten as a remedy for witchcraft.[31] Romani people still eat hedgehogs, boiled or roasted, and also use the blood and the fat for its supposed medicinal value.[32] During the 1980s, "hedgehog-flavour" crisps were introduced in Britain, although the product did not contain any hedgehog.[33]

The title character in Beatrix Potter's 1905 children's story The Tale of Mrs. Tiggy-Winkle is a hedgehog.[36]

In Part Four of Fyodor Dostoyevsky's The Idiot, Aglaya gives Prince Myshkin a hedgehog that Kolya has acquired and sold to her, as a gift of reconciliation, which clears up the bad feeling between them after a quarrel. In the passage, the hedgehog is identified as signifying "friendship, a burying of the hatchet, and making up". [37]

E. Nesbit wrote a fantasy short story entitled "The Princess and the Hedge-pig" (collected in The Magic World, 1912), in which a prince is under an enchantment, and his transformation into a hedgehog allows a curious prophecy to come true.

In the 1927 British detective novel, The Ellerby Case by John Rhode, in the chapter entitled "The Green Hedgehog," Doctor Lancelot Priestly, the investigator who solves the case, is nearly murdered by a hedgehog dyed green whose spines have been impregnated with a virulent poison.

Sonic the Hedgehog, first introduced in 1991, is a blue anthropomorphic hedgehog and the title character of numerous video games, comic strips, and animated cartoons by Sega. 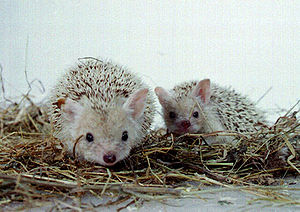 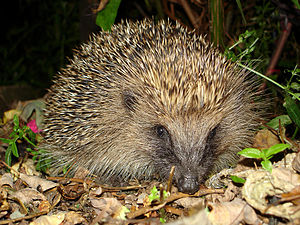 An urban European hedgehog out foraging at night.