From Infogalactic: the planetary knowledge core
Jump to: navigation, search
This is not to be confused with the animal Hedgehog. For the area denial weapon, see Czech hedgehog.

The Hedgehog (also known as an Anti-Submarine Projector) was a forward-throwing anti-submarine weapon that was used during the Battle of the Atlantic in the Second World War. The device, which was developed by the Royal Navy, fired up to 24 spigot mortars ahead of a ship when attacking a U Boat. It was deployed on convoy escort warships such as destroyers and corvettes to supplement the depth charges.

As the mortar projectiles employed contact fuzes rather than time or barometric (depth) fuzes, detonation always occurred directly against the hull of a submarine making it more deadly than depth charges which relied on damage caused by hydrostatic shockwaves. Statistics show that in WWII out of 5,174 British depth charge attacks there were 85.5 kills: a ratio of 60.5 to 1. In comparison, the Hedgehog made 268 attacks for 47 kills: a ratio of 5.7 to 1.[1]

The "Hedgehog", so named because the empty rows of its launcher spigots resembled the spines of a hedgehog, was a replacement to the unsuccessful Fairlie Mortar that was trialled aboard HMS Whitehall (D94) in 1941. Although a failure, the Fairlie was designed to fire depth charges ahead of a ship when attacking a submarine. This principle of forward-firing projectiles was considered viable. It was from this, secret research undertaken by the Directorate of Miscellaneous Weapons Development (DMWD) led to the development of the Hedgehog.[2]

The weapon was a multiple 'spigot mortar' or spigot discharger, a type of weapon developed between the wars by Lieutenant Colonel Stewart Blacker, RA. The spigot mortar was based on early infantry trench mortars. The spigot design allowed a single device to fire warheads of varying size. The propelling charge was part of the main weapon and worked against a rod (the spigot) set in the baseplate which fitted inside a tubular tail of the 'bomb'. This principle was first used on the Blacker Bombard 29mm Spigot Mortar and the later PIAT anti-tank weapon.

The adaptation of the bombard for naval use was made in partnership with MIR(c) under Major Millis Jefferis who had taken Blacker's design and brought it into use with Army. The weapon fires a salvo of 24 bombs in an arc, aimed to land in a circular or elliptical area about 100 feet (30 m) in diameter at a fixed point about 250 yards (230 m) directly ahead of the attacking ship. The mounting initially was fixed but was later replaced by a gyro-stabilised one to allow for the rolling and pitching of the attacking ship.

The system was developed to solve the problem of the target submarine disappearing from the attacking ships ASDIC when the ship came within the sonar's minimum range. Due to the speed of sound in water, the time taken for the 'ping' echo to return to the attacking ship from the target submarine became too short to allow the human operator to distinguish the returning audible echo from that of the initial sound pulse emitted by the sonar - the so-called 'Instantaneous echo', where the output sound pulse and returning echo merge. This 'blind spot' allowed the submarine to make evasive manoeuvres undetected while the ship was still out of range for depth charge attack, the submarine being effectively invisible to the sonar as the ship came within the sonar's minimum range. The solution was a weapon mounted on the foredeck that discharged the projectiles up and over that carrying ship's bow, to land in the water some distance in front of the ship while the submarine was still outside the sonar's minimum range.

Hedgehog entered service in 1942. Carrying a Torpex charge weighing 16 kg (35 lb), each mortar had a diameter of 18 cm (7.1 in) and weighed about 29.5 kg (65 lb). The projectiles were angled so they would land in a circular shape with a diameter of 40 m (130 ft) about 180 m (590 ft) ahead of a stationary ship. The projectiles would then sink at about 7 m/s (23 ft/s). They would reach a submerged U boat, for example at 200 ft in under 9 seconds. If one struck the submarine, it was hoped the subsequent explosion would trigger all the other bombs to explode as well. Hedgehog remained in use as anti submarine weapon until the end of the war.

Initial success rates - of about 5% - were only slightly better than depth charges. The results were blamed on crew inexperience and low confidence in the weapon. However, after an officer from the DMWD was sent to Londonderry Port, where the convoy crews were based, with better training and shipwide talks on examples of successful Hedgehog attacks, the kill rate improved considerably.[3] By the end of the war, statistics showed for every five attacks made by Hedgehog resulted in a kill (it took more than 80 with depth charges).[1] In response to this new deadly threat to its U Boats, the Kriegsmarine brought forward its program on homing torpedoes in 1943. These could be fired at greater distances from a convoy; after running straight for a predetermined distance, an internal guidance system would take over guiding it to a target.

In late 1943 the Royal Navy introduced Squid. This was a three-tubed mortar that launched depth charges. Initially it was used as a single weapon, but when this failed to be successful, it was upgraded to the "double squid" that consisted of two launchers placed in parallel. In 1955 this system was upgraded to the three-barreled Limbo that launched 400 lb Mynol charges.

The Australian Army adapted the marine Hedgehog into a land-based seven-shot launcher that could be mounted on the back of Matilda tanks.

The launcher had four "cradles", each with six launcher spigots. The firing sequence was staggered so all the bombs would land at about the same time. This had the added advantage of minimising the stress on the weapon's mounting, so that deck reinforcement was not needed, and the weapon could easily be retrofitted to any convenient place on a ship. Reloading took about three minutes.

The Hedgehog had four key advantages over the depth charge:

The Hedgehog became much more successful than depth-charge attacks (the best kill rate was about 25% of attacks whereas depth charges never achieved more than 7%). It initially had a very poor record, although many of the factors had nothing to do with the design of the weapon.[citation needed] USS England sank six Japanese submarines in a matter of days with Hedgehog in May 1944.[5] 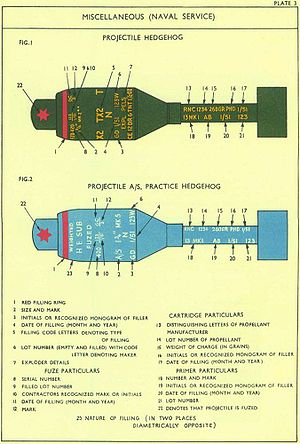 For a single bomb