Hegewisch (pronounced /ˈhɛɡˌwɪʃ/ "heg-wish" by the locals. It derives from a German surname pronounced "hege-vish"), one of the 77 community areas of Chicago, Illinois, is located on the city's far south side. It is bordered by the neighborhoods of Riverdale and South Deering to the west, the East Side to the north, the village of Burnham to the south and the city of Hammond, Indiana to the east. It is part of the 10th ward of Chicago. Alderman Susan Sadlowski Garza represents Hegewisch after winning a runoff election in 2015. The community area is named for Adolph Hegewisch, the president of U.S. Rolling Stock Company who hoped to establish “an ideal workingman's community” when he laid out the town along a rail line in 1883, six years before Chicago annexed the town.

Arizona – referred as such due to the sandy nature of the original soil and presence of the native cactus Opuntia compressa) – lies East of Avenue O and north of 138th St; this area is also sometimes called "the Avenues". Avalon Trails is North of 130th Street, East of Torrence and West of Baltimore Avenue; it is the youngest part of Hegewisch and is built on wetland area where the original settlers of Hegewisch hunted small game and fished. The oldest part of Hegewisch is Old Hegewisch which includes the area North of 138th St, South of 130th St., East of Torrence Avenue, and West of Avenue O. 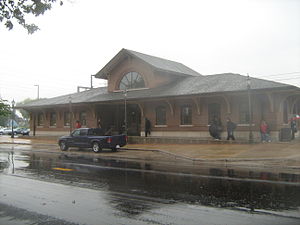 The South Shore Line stops at Hegewisch. The train goes as far westbound as Millennium Station in Downtown Chicago and as far eastbound as South Bend Regional Airport in South Bend, Indiana.

Under the most recent version of CTA Red Line extension plan, the Red Line will stop near Hegewisch, stopping on the edge of Altgeld Gardens housing project.

Hegewisch is served by the following CTA and Pace bus routes:

Hegewisch is currently served by Our Neighborhood Times, a bimonthly newspaper headquarters in Hegewisch and widely distributed throughout the neighborhood. Between 1997 and 2012, Hegewish was also served by the South Chicago-based Southeast Chicago Observer. The paper was distributed in Hegewisch, albeit to a lesser extent. Both papers come out on even-numbered weeks.