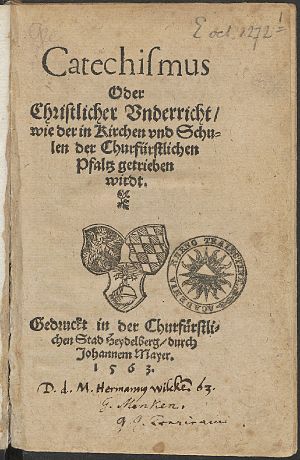 The Heidelberg Catechism (1563), one of the Three Forms of Unity, is a Protestant confessional document taking the form of a series of questions and answers, for use in teaching Reformed Christian doctrine. It was written in 1563 in Heidelberg, present-day Germany. Its original title translates to Catechism, or Christian Instruction, according to the Usages of the Churches and Schools of the Electoral Palatinate. Commissioned by the prince-elector of the Electoral Palatinate, it is sometimes referred to as the "Palatinate Catechism." It has been translated into many languages and is regarded as one of the most influential of the Reformed catechisms.

Elector Frederick III, sovereign of the Electoral Palatinate from 1559 to 1576, commissioned the composition of a new Catechism for his territory. While the catechism's introduction credits the "entire theological faculty here" (at the University of Heidelberg) and "all the superintendents and prominent servants of the church"[1] for the composition of the catechism, Zacharius Ursinus is commonly regarded as the catechism's principal author. Caspar Olevianus (1536–1587) was formerly asserted as a co-author of the document, though this theory has been largely discarded by modern scholarship.[2][3] Johann Sylvan, Adam Neuser, Johannes Willing, Thomas Erastus, Michael Diller, Johannes Brunner, Tilemann Mumius, Petrus Macheropoeus, Johannes Eisenmenger, Immanuel Tremellius and Pierre Boquin are all likely to have contributed to the Catechism in some way.[4] Frederick himself wrote the preface to the Catechism[5] and closely oversaw its composition and publication.

Frederick, who was officially Lutheran but had strong Reformed leanings, wanted to even out the religious situation of his highly Lutheran territory within the primarily Catholic Holy Roman Empire. The Council of Trent had just concluded with its conclusions and decrees against the Protestant faiths, and the Peace of Augsburg had only granted toleration for Lutheranism within the empire where the ruler was Lutheran. One of the aims of the catechism was to counteract the teachings of the Roman Catholic Church as well as Anabaptists and "strict" Gnesio-Lutherans like Tilemann Heshusius and Matthias Flacius, who were resisting Frederick's Reformed influences, particularly on the matter of the Eucharist.

The Catechism based each of its statements on biblical proof-texts, and Frederick himself would defend it as biblical, not reformed, at the 1566 Diet of Augsburg when he was called to answer to charges of violating the Peace of Augsburg.

The Catechism is divided into fifty-two sections, called "Lord's Days," which were designed to be taught on each of the 52 Sundays of the year. A synod in Heidelberg approved the catechism in 1563. In the Netherlands, the Catechism was approved by the Synods of Wesel (1568), Emden (1571), Dort (1578), the Hague (1586), as well as the great Synod of Dort of 1618-1619, which adopted it as one of the Three Forms of Unity, together with the Belgic Confession and the Canons of Dort.[6] Elders and deacons were required to subscribe and adhere to it, and ministers were required to preach on a section of the Catechism each Sunday so as to increase the often poor theological knowledge of the church members.[6] In many Dutch Reformed denominations this practice is still continued.

In its current form, the Heidelberg Catechism consists of 129 questions and answers. These are divided into three main parts:

I. The Misery of Man

II. The Redemption (or Deliverance) of Man

This part consists of Lord's Day 5 through to Lord's Day 31. It discusses:

III. The Gratitude Due from Man (for such a deliverance)

This part consists of the Lord's Day 32 through to Lord's Day 52. It discusses:

The first Lord's Day should be read as a summary of the catechism as a whole. As such, it illustrates the character of this work, which is devotional as well as dogmatic or doctrinal. The first Question and Answer reads:

What is Thy only comfort in life and death?

That I with body and soul, both in life and death, am not my own, but belong unto my faithful Savior Jesus Christ; who, with his precious blood, hath fully satisfied for all my sins, and delivered me from all the power of the devil; and so preserves me that without the will of my heavenly Father, not a hair can fall from my head; yea, that all things must be subservient to my salvation, and therefore, by his Holy Spirit, he also assures me of eternal life, and makes me sincerely willing and ready, henceforth, to live unto him.

The Catechism is most notoriously and explicitly anti-Catholic in the additions made in its second and third editions to Lord’s Day 30 concerning "the popish mass," which is condemned as an "accursed idolatry."

Following the War of Palatine Succession Heidelberg and the Palatinate were again in an unstable political situation with sectarian battle lines.[7] In 1719 an edition of the Catechism was published in the Palatinate that included Lord's Day 30. The Catholic reaction was so strong, the Catechism was banned by Charles III Philip, Elector Palatine. This provoked a reaction from Reformed countries, leading to a reversal of the ban.[8]

In some Reformed denominations Q&A 80 has been removed, bracketed, and/or noted as inaccurate and not binding doctrine.[citation needed]

Use in various denominations and traditions

The influence of the Catechism extended to the Westminster Assembly of Divines who, in part, used it as the basis for their Shorter Catechism.[9]

The Heidelberg Catechism is one of the three Reformed confessions that form the doctrinal basis of the original Reformed church in The Netherlands, and is recognized as such also by the Dutch Reformed churches that originated from that church during and since the 19th century.

A revision of the catechism was prepared by the Baptist minister, Hercules Collins. Published in 1680, under the title 'An Orthodox Catechism', it was identical in content to the Heidelberg catechism, with exception to questions regarding baptism, where adult immersion was defended against infant baptism and the other modes of affusion and aspersion.