Helena (wife of Inge the Elder)

From Infogalactic: the planetary knowledge core
(Redirected from Helena, Queen of Sweden)
Jump to: navigation, search

Queen Helena or Elin, also known as Maer, Mär or Mö (Old Norse for Maiden) (born in the 11th century – Floruit 1105), was a Swedish queen consort, spouse of King Inge the Elder and the sister of King Blot-Sweyn of Sweden. 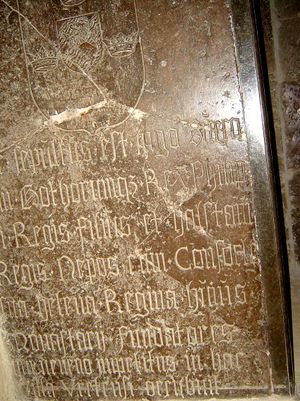 A 17th century gravestone in Vreta Abbey with a partially incorrect inscription mentions an Ingi and a Helen – their burial somewhere in the church has been accepted as fact.

The background of Queen Helena is unconfirmed. She is believed to have been from Östergötland. Helena is said to have been of the old Swedish royal family, a sideline of the House of Yngling,[1] and the sister of Blot-Sweyn. King Inge, who was King of Sweden and parts of Sweden several times, is famous for being the King who defeated the pagans in the religious wars who took place in Sweden between 1022 and 1088 and abolished freedom of religion, requiring everyone to profess the Christian faith. His greatest opponent in this fight was the Pagan King Blot-Sweyn.

King Inge was said to have married Blot-Sweyn's sister Maer, or Mö; in Icelandic sources, she is referred to as Mär[1] and officially, she is referred to as Helena. It is also sometimes suggested that she was of Greek or Russian origin, but this is unconfirmed and unlikely. The marriage is well pointed out in history as the wedding between Inge and the sister of Blot-Sweyn, and Sweyn is always referred to as the brother-in-law of Inge*.[2] Because of this it is therefore sometimes believed that Inge was married two times. However, "Maer" is not an actual name, it is simply an old Nordic word for "Maiden"; the other spelling of the name, "Mö", is still well known as an old-fashioned word for "Maiden" or "Virgin". "Helena" is the usual Latin spelling of the Swedish name Elin. This can be assumed to be the same person; the maiden Elin, to Christian foreigners spelled as Helena in Latin, sister to the Pagan King Blot-Sweyn.

The genealogy of the old Viking families is very hard to follow, in spite of the many songs which describe them, but as sister of Blot-Sweyn, she may have been a daughter of Prince Ingvar Vittfarne of Sweden, son of King Emund the Old of Sweden, and the cousin of her spouse. The marriage was likely arranged for political reasons to unite the Pagan and Christian fractions. A runestone raised by a man by the name Sigtorn to the honour of his daughter Mö and his son Sven is suggested to have been raised by the father of Queen Helena and her brother Blot-Sweyn. Helena's full name would in that case have been Helena Sigtornsdotter.

Not many things are confirmed about queen Helena, but she was most likely a Pagan like her brother at the time of her marriage and convinced, willingly or by force, to submit to the Christian faith and convert. She may have received the name Helena by her christening, as her daughters were also given names from Christian Europe: Christina, Margaret and Catherine. It is not known which side she favoured between the Pagans and Christians. In 1087-88, she witnessed the war between her Christian spouse and her Pagan brother and saw the former triumph. Perhaps she mourned the death of her brother and Paganism in 1087–1088, but to the end of her life she was, or gave the impression to be a Christian; after the defeat of the pagans, she founded Sweden's first known nunnery, the Benedictine Vreta Abbey in Östergötland, jointly with her spouse some time between 1090[3] and 1100. She donated twenty estates in Östergötland to the convent upon its foundation,[3] estates believed to have been the queen's, possibly as a dowry, or as an inheritance after her brother Sweyn. After the death of her spouse in c. 1105, Queen Dowager Helena entered the Vreta Abbey as a nun.

Confusion with Helena of Skövde

Queen Helena or Elin has long been confused in history with Saint Helena of Skövde (d.1135), who lived in Sweden during the same period. This is a misconception which has no support from historians now.