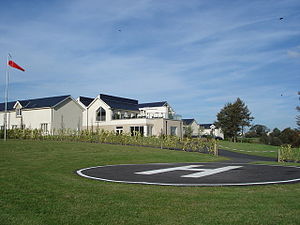 A helipad in the UK 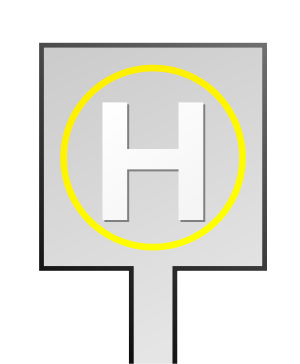 A helicopter landing pad (helipad) is a landing area or platform for helicopters. While helicopters are able to operate on a variety of relatively flat surfaces, a fabricated helipad provides a clearly marked hard surface away from obstacles where a helicopter can land safely.

Larger helipads, intended for use by helicopters and other VTOL or powered lift aircraft, may be called vertiports. An example is Vertiport Chicago,[1] which opened in 2015.[2] 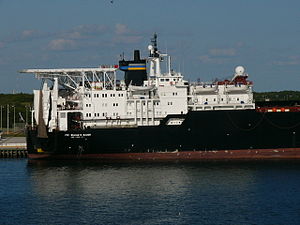 There is a helipad in the back of this U.S. Navy Strategic Sealift Ship.

Helipads may be located at a heliport or airport where fuel, air traffic control and service facilities for aircraft are available. However, most helipads are located remote from such facilities due to space and cost constraints.[citation needed]

Some skyscrapers maintain a helipad on their roofs in order to accommodate air taxi services. Some basic helipads are built on highrise buildings for evacuation in case of a major fire outbreak. Major police departments may use a dedicated helipad at heliports as a base for police helicopters. Large ships and oil platforms sometimes have a helipad on board, usually called a helicopter deck or helideck.

Helipads are common features at hospitals where they serve to facilitate medical evacuation or air ambulance transfers of patients to trauma units or to accept patients from remote areas without local hospitals or facilities capable of providing the level of emergency medicine required. In urban environments, these heliports are typically located on the roof of the hospital.

Rooftop helipads sometimes display a large two-digit number, representing the weight limit (in thousands of pounds) of the pad. In addition, a second number may be present, representing the maximum rotor diameter in feet.[3]

Location identifiers are often, but not always, issued for helipads. They may be issued by the appropriate aviation authority. Authorized agencies include the Federal Aviation Administration in the United States, Transport Canada in Canada, the International Civil Aviation Organization, and the International Air Transport Association. Some helipads may have location identifiers from multiple sources, and these identifiers may be of different format and name.

The world's largest heliport is in Morgan City, Louisiana, and has a total of 46 helipads, used mostly to support offshore oil platforms in the Gulf of Mexico.

A portable helipad is a helipad structure with a rugged frame that can be used to land helicopters in any areas with slopes of up to 30 degrees, such as hillsides, riverbeds and boggy areas. Portable helipads can be lifted by helicopter to place them where the helicopter needs to land, as long as there are no obstructions nearby. They may have telescopic legs that help level them in any terrain. Once the helicopter lands, the pilot can lock the telescopic legs for more landings at that site.[clarification needed][citation needed]