For other uses, see Helmet (disambiguation). 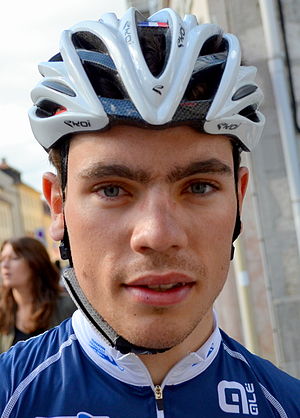 A man wearing a bicycling helmet

A helmet is a form of protective gear worn to protect the head from injuries.

Ceremonial or symbolic helmets (e.g. UK policeman's helmet) without protective function are sometimes used. The oldest known use of helmets was by Assyrian soldiers in 900BC, who wore thick leather or bronze helmets to protect the head from blunt object and sword blows and arrow strikes in combat. Soldiers still wear helmets, now often made from lightweight plastic materials.

In civilian life, helmets are used for recreational activities and sports (e.g. jockeys in horse racing, American football, ice hockey, cricket, baseball, and rock climbing); dangerous work activities (e.g. construction, mining, riot police); and transportation (e.g. Motorcycle helmets and bicycle helmets). Since the 1990s, most helmets are made from resin or plastic, which may be reinforced with fibers such as aramids.

The word helmet is diminutive from helm, a Medieval word for protective combat headgear. The Medieval great helm covers the whole head and often is accompanied with camail protecting throat and neck as well. Originally a helmet was a helm which covered the head only partly. 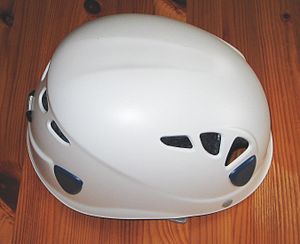 All helmets attempt to protect the user's head by absorbing mechanical energy and protecting against penetration. Their structure and protective capacity are altered in high-energy impacts. Beside their energy-absorption capability, their volume and weight are also important issues, since higher volume and weight increase the injury risk for the user's head and neck. Anatomical helmets adapted to the inner head structure were invented by neurosurgeons at the end of the 20th century.

Helmets used for different purposes have different designs. For example, a bicycle helmet must protect against blunt impact forces from the wearer's head striking the road. A helmet designed for rock climbing must protect against heavy impact, and against objects such as small rocks and climbing equipment falling from above. Practical concerns also dictate helmet design: a bicycling helmet should be aerodynamic in shape and well ventilated, while a rock climbing helmet must be lightweight and small so that it does not interfere with climbing.

Some helmets have other protective elements attached to them, such as a face visors or goggles or a face cage, or an ear cage or ear plugs and other forms of protective headgear, and a communications system. Sports helmets may have an integrated metal face protector (face cage). 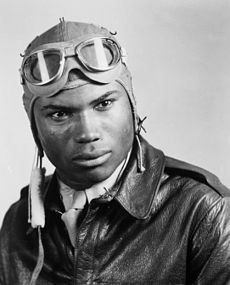 Howard A. Wooten of the Tuskegee Airmen wearing leather helmet and goggles

Historically, helmets have been made from a wide range of materials, including various metals, plastics, leather, and even some fibrous materials such as Kevlar. Ancient and medieval helmets were usually made of metals, often bronze, iron or steel, though some boar's tusk helmets were known to ancient Mycenea.

Some British gamekeepers during the 18th and 19th centuries wore helmets made of straw bound together with cut bramble.[1] Developed in the mid-19th century, the pith helmet, made of pith or cork, was often worn by Europeans in the tropics.

Military applications in the 19th-20th centuries saw a number of leather helmets, particularly among aviation and tanker crews in the early 20th century. In the early days of the automobile, some motorists also adopted this style of headgear, and early football helmets were also made of leather. In World War II, American, Soviet, German, Italian and French flight crews wore leather helmets, the German pilots disguising theirs under a beret before disposing of both and switching to cloth caps.[when?] The era of the First and Second World Wars also saw a resurgence of metal military helmets, most notably the Brodie helmet and the Stahlhelm.

Modern helmets have a much wider range of applications, including helmets adapted to the specific needs of many athletic pursuits and work environments, and these very often incorporate plastics and other synthetic materials for their light weight and shock absorption capabilities. Some types of synthetic fibers used to make helmets in the 21st century include Aramid, Kevlar and Twaron.[citation needed] 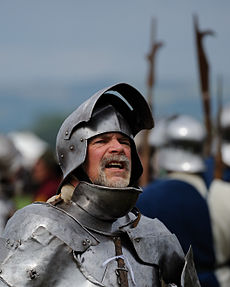 Helmets of many different types have developed over the course of human history. Most early helmets had military uses, though some may have had more ceremonial than combat-related purposes.

Two important helmet types to develop in antiquity were the Corinthian helmet and the Roman galea.

During the Middle Ages, many different military helmets and some ceremonial helmets were developed, almost all of these being made of metals. Some of the more important medieval developments included the great helm, the bascinet, the frog-mouth helm and the armet.

In the 19th century, more materials were incorporated, namely leather, felt and pith. The pith helmet and the leather pickelhaube were important 19th century developments. The greatest expansion in the variety of forms and composition of helmets, however, took place in the 20th century, with the development of highly specialized helmets for a multitude of athletic and professional applications, as well as the advent of modern plastics. During World War I, the French army developed the Adrian helmet, the British developed the Brodie helmet, and the Germans produced the Stahlhelm. 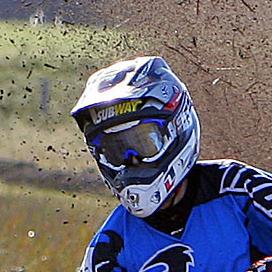 Helmets since the mid-20th century have often incorporated lightweight plastics and other synthetic materials, and their use has become highly specialized. Some important recent developments include the French SPECTRA helmet, American PASGT (commonly called "Kevlar" by U.S. troops) and Advanced Combat Helmet, or ACH.

As the coat of arms was originally designed to distinguish noble combatants on the battlefield or in a tournament, even while covered in armour, it is not surprising that heraldic elements constantly incorporated the shield and the helmet, these often being the most visible parts of a knight's military equipment.

The common practice was to display a helmet as part of the coat of arms, above the shield, a practice maintained long after helmets themselves ceased to be used. In German heraldry, the helmet was even considered to be inseparable from the shield, in contrast to English heraldry, where the practice of displaying the helmet and crest alone with no shield whatsoever came into vogue in Victorian times. In most post-medieval heraldic traditions, the style, colour and position of the helmet became emblematic of the rank of the bearer. Rank was also often denoted by a coronet, usually either surmounting the shield or placed upon the helmet.

The practice of indicating peerage through the display of barred or grilled helmets first appeared around 1587-1615,[2] and the heraldic convention of displaying helmets of rank in the United Kingdom, which came into vogue around Stuart times, is as follows:[3]

Earlier rolls of arms reveal, however, that early heraldic helmets were depicted in a manner faithful to the styles in actual military or tournament use at the time.[4]