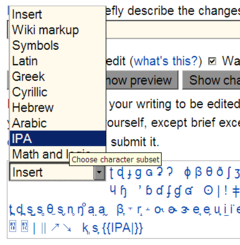 You can insert letters and glyphs from IPA and other systems from a pseudo-keyboard at bottom of any edit window. Only a handful of these special letters are needed for transcribing English.

This is an introduction to the International Phonetic Alphabet (IPA) for English-speaking Wikipedians. Its purpose is to orient English speakers to the IPA's basic principles. Its purpose is to indicate how a word or name actually sounds. Wikipedia uses IPA because it's the global standard used by professionals.

IPA's most daunting feature is that it has discrete letters for almost all of the distinctive sounds found in the world's languages. (See IPA#Chart.) Fortunately, using the IPA for English requires learning only a small subset of these:

Several of these sounds are actually two vowel sounds combined, rather than pure vowel sounds as they are in Spanish or Italian: The letter A is pronounced /eɪ/, E, EE is /iː/, I is /aɪ/, O is /oʊ/, and U is /juː/. In the IPA, the letter /j/ is used for the English Y sound, thus you and ewe are transcribed /juː/. (See below.) While transcribing in the IPA, you can write English alphaphonemic vowels as capitals: [rAk], [sEEm], [rIs], [dOt], [Uz], etc., and then convert from the conventions above:

A w-like sound can be heard at the end of O in words like echoing (say: echo-echo-echoing, and it may come out like echo-wecho-wecho-wing) and after the co- in cooperate; that is what the /ʊ/ in the transcription /oʊ/ captures.

There are a couple other long vowels and diphthongs in English: OO sound in food (but not good) is written /uː/: /fuːd/. That is, it is written like the vowel of use without the initial y sound /j/. As noted above, the OW sound of doubt or cow is written /aʊ/. There is also the OY sound /ɔɪ/ of joy, /dʒɔɪ/.

English short vowels are all transcribed by a single letter in the IPA.

Because English short vowels a e i o u are closer to the Classical pronunciation (still found in Spanish and Italian) than the long vowels are, it is the short vowels which are transcribed with IPA letters which resemble the English letters a e i o u. However, they are modified to show that they aren't exactly the Classical sounds. For the a sound of cat, the Old English letter ash, ‹æ›, was resurrected: /kæt/. The e i u sounds of pet, pit, put (not putt) were originally written as capital letters, and that is sometimes still done with manual typewriters. However, small caps looked better, so they were for a time written E I U. These took more cursive forms over time, and are today written /ɛ ɪ ʊ/: pet /pɛt/, pit /pɪt/, put /pʊt/. The latter, of course, is also the short oo sound of good /ɡʊd/. The u vowel of putt or cut, is written as an upturned letter "v" e.g. cut /kʌt/. The exact pronunciation of this sound varies considerably among English dialects.

The a sound in bra is written with a cursive a. Because it's long in many dialects, it's /ɑː/ in the IPA: /brɑː/. Likewise, the aw sound of law is long in many dialects, but different than the bra sound. It's written with an "open" o (just as /ɛ/ looks like an open e, since a small cap o looks just like a regular oː law /lɔː/. (Many of you might not make this distinction, in which case you can think of these vowel letters as being the same when reading the IPA.) For those of you who distinguish it, there is a third similar sound, the o of mop. This is written with the bra vowel letter rotated 180°: mop /mɒp/. (A rather unusual IPA letter, as that's an unusual vowel, not found in many languages). The vowel sound in bird is written as an upturned /ɛ/], therefore it is written as/bɜrd/.

Finally, there's the slurred schwa sound found in many unstressed syllables, as at the end of sofa. This is written /ə/, a symbol used in many US dictionaries. The stressed syllable is marked with a tick: sofa /ˈsoʊfə/. Note that the letter /ə/ is never used for a stressed vowel; for words like cut, we use /ʌ/: butter /ˈbʌtər/, cuppa /ˈkʌpə/.

While most IPA consonants are intuitive for English speakers, there are some caveats:

(This is the value the letter J has in central European languages like German and Polish. The IPA letter /y/ is used for a non-English vowel, the French u, German ü, and Swedish y sound.)

IPA's purpose and Wikipedia's use of IPA

IPA's purposes are to 1) represent the phonetics of words (how they sound), and 2) to give samples of the phonology of a language (how the language as a whole sounds). The second purpose concerns only linguists. The first purpose concerns any interested reader, but only to a limited degree, as transcribing words into IPA does not need to be perfect or overly precise (something for fluent IPA users to consider). The word "transcribe" is used to distinguish this from normal writing or spelling, which has other purposes (such as preserving word etymologies and meaning).

IPA is complex enough to represent nearly anything, but high-fidelity transcriptions will use glyphs that are unfamiliar to English readers and unpracticed in English phonology. For example a transcription of something like the Icelandic name Eyjafjallajökull is pronounced [ˈɛɪjaˌfjatl̥aˌjœkʏtl̥] (

listen), meaning island-mountain glacier, may approximate Icelandic phonology, but such information will likely be too much for English readers, who may need to reference the name using what is at best an approximate pronunciation anyway. (Often an English version of a foreign name will try to employ translation in combination with transcription, hence Eyja-fjalla glacier (['eija-f'jala] glacier) suffices.)