Wikipedia (mobile) – click to view Wikipedia on a mobile device

It is possible to access Wikipedia on mobile devices such as tablet computers, mobile phones and PDAs through several methods.

Mobile version of the site

This mobile version is available for all languages of Wikipedia. It is actively developed, supported and translated. It supports editing and image uploading; visit any article and you'll see a pencil icon on every section. Anyone, including those who are not logged in, can use the mobile editor. You can also check your watchlist on mobile, add/remove articles from it, and more. If you don't want to use the mobile version, you can find options at the bottom of every page to switch to the desktop version.

Legacy mobile browsers that were fairly advanced during their time, such as NetFront (2.3), should be able to browse the Wikipedia Mobile version without too much effort. Depending on a phone's capabilities, it is advisable to turn images and JavaScript off.

Older featurephones' native browsers commonly have limited functionality and are outdated. If your phone is Java ME-capable, you might consider installing Opera Mini, a Java ME-based Internet browser for mobile phones. Some phones have Opera Mini built-in, and may only require setting the browser up for use. Opera Mini works by sending a request to Opera's servers, which return a compressed and stripped-down page to the phone. Depending on version, Opera Mini is often more functional and up-to-date than the native browser supplied with the phone. Opera Mini has a built-in Wikipedia search facility. 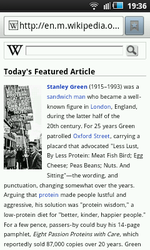 Wikipedia mobile in 2011 as rendered in stock browser on Android 2.2

For many users stuck with Android 2.3 (and maybe older) on their phones and tablets, the stock Android Browser is the default and only browser. The browser released with Android 2.3.6 is from September 2011, and is based on WebKit 533.1. This version remains common, even if some device manufacturers may have used a newer browser engine for their distribution of Android 2.3.x.

In early 2015, Wikipedia mobile and its sister sites introduced a redesigned search box at the top of each Wikipedia page, along with search suggestions. The new search box was rendered properly in modern browsers, but for many months, the redesign failed the stock browser on Android 2.3 and earlier, as the search box stayed obscured by another box until about mid-June. After a design update, the search box is again visible and accessible with the older Android Browser, even if search suggestions don't work. Through that time, a workaround has been to use the Wikipedia Android app, or an alternative and more modern browser, such as Firefox for Android, which is still developed and released for Android 2.3.

While search suggestions don't work in the stock Android 2.3 browser, they do in the Wikipedia app and in Firefox. On low-spec mobile phones, Firefox for Android can be less responsive than the well-optimized stock browser or the native Wikipedia app: for example, editing Wiki page code may be slow on Firefox, whereas some complex pages are rendered faster by Firefox than the stock Android Browser. 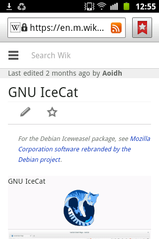 Stock browser. The search box is somewhat narrow, with instruction text cut off. 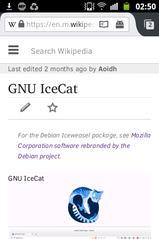 Firefox 38: The search box is at full width. 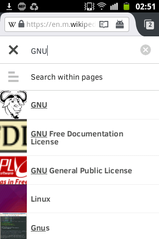 The official iOS application from the Wikimedia Foundation is called "Wikipedia Mobile". It is free, and lets you read and edit articles.

The official Android application from the Wikimedia Foundation is called "Wikipedia". It is free, and lets you read and edit articles. It has no article watch feature, nor obvious access to talk page.

The official Windows 8 application from the Wikimedia Foundation can be downloaded from Windows Store.

If a browser is installed for general use, it can be used to access the general Wikipedia site, also for editing, depending on limitations of the browser. One may want to adapt the user style and preferences to optimize them for the mobile device. For example, navigation popups may or may not be convenient on the mobile device.

The official mobile version of Wikipedia is located at http://m.wikipedia.org.

Over the years, many users and developers had created their own websites for reading Wikipedia on a variety of mobile devices; most of them are now defunct (as of November 2013), with Wapedia having remained until 4 November 2013 as one of the last non-Wikipedia holdouts to serve WAP-formatted textual Wikipedia content for mobile devices.

Since Wapedia's closure, several mobile phones with browsers that only accept WAP — and not even basic HTML, and with no way to install any other browsers — have become disadvantaged. These include the earliest Internet-enabled mobile phones with first WAP browsers, such as Ericsson R320 (2000), and later on, unextendable low-end featurephones with WAP-only browsers.

http://google.com/gwt/n — Google Web Transcoder (GWT) displays a form to enter the URL for the Wikipedia Mobile (or any other) site, and returns pages tailored for the specific browser of a particular phone model. The form also includes a checkbox, which, when checked, disables loading of images. Browsing can be continued throughout the Transcoder interface.

Google Web Transcoder might not work in all WAP-only browsers, as it tends to feed larger pages than some WAP browsers are able to accept because of limitations in software configuration and phone hardware; one such example is Samsung SGH-C170 (2007), which has a WAP deck limit of 4000 bytes.

A computer-generated audio (speech synthesis) version of all Wikipedia articles is provided by the Pediaphon service. It is usable on- and off-line with common MP3 players, PDAs, cell phones (WAP) and with every phone via voice call. Pediaphon can be used as a location-based service.

Defunct services as of 2013

A free real-time mobile-adapted Wikipedia browser provided by HAWHAW at http://mobile.wikipedia.org minimizes images and presents article text in pieces of approximately 7 kB to facilitate transfer. Standard browsers often transfer hundreds of kB when opening an article. HAWHAW is suitable for slow or expensive Internet access, as well as devices with a small screen, but may well be used in all conditions to get a quick introduction to various concepts, which is usually provided in the first 7 kB, making downloading of further pieces mostly unnecessary.

It does not give spelling suggestions for slightly misspelled terms, and does not support tables.

One of the most prominent Wikipedia portals for mobile devices was Wapedia. Started in August 2004 and shut down on 4 November 2013, Wapedia offered a recent version of every article. Next to Wikipedia, it provided access to the sister projects Wiktionary, Wikiquote and many other popular wikis. Wapedia pages contained advertisements inserted by the site's owners.[1] It supported a wide range of devices and even some of the oldest mobile devices could be used to access Wikipedia through this website.

Sevenval AG offers a free real-time transformation of the current Wikipedia. The link to the service is wikipedia.7val.com. It offers a full-blown version of Wikipedia for all kinds of mobile devices. This enables mobile users to edit articles and administer their personal accounts. Wikipedia's sister projects – Wiktionary, etc. – can be accessed via this service as well. 50 languages of Wikipedia are supported.

The following features are currently available.

Miniwiki is a simple mobile site for Pocket PC and Palm devices. It synchronizes its content with Wikipedia at real time.

Automatic conversion from HTML to WML is not really a «version» of Wikipedia, but is still worth mentioning. Some projects offer transcoding software (e.g. Coldjava's h2W servlet), while others offer the transcoding online and on the fly (e.g. BabelServer).

These are, of course, free:

Many iPhone applications exist for browsing Wikipedia. Currently, the only ways to edit Wikipedia on an iPhone are to use the official Wikipedia Mobile application or access it via Safari or Google Chrome. The links will open the iTunes Store:

There are a number of Wikipedia applications developed for the iPad. Most of them are geared toward enhancing the reading experience, but at least one app is built specifically to enable contribution (editing and photo uploads).

Many users prefer to use Safari in Desktop mode. There have been complaints about Safari on the iPad automatically switching to mobile mode.

A read only version of Wikipedia is available at http://wikipedia.boopsie.com/. This mobile phone download supports BlackBerry, Windows Mobile, Palm OS, Symbian S60, J2ME, Android, and iPhone. (A BREW version is available but must be side-loaded.) 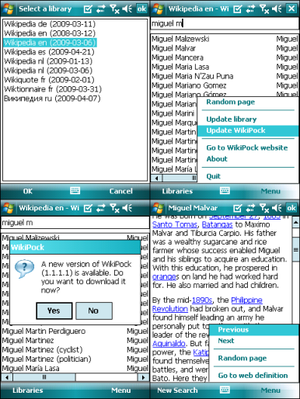 WikiPock is a mobile application that provides offline access to all Wikipedia articles in 22 languages for Windows Mobile, BlackBerry, Android and Symbian OS mobile phones. All the articles are stored in the mobile phone's memory.

Amazon Kindle (3G versions) have the free access to Wikipedia content through mobile phone network on the "experimental browser" included in Kindle software. All content is shown in black-and-white (all colored images and graphs are converted).

The Wiki-as-Ebook project provides massive encyclopaedias for E-Book-readers created from a large set of Wikipedia articles (commercial; 2013). Colored images are converted to grayscale.