Helsinki Airport[3] or Helsinki-Vantaa Airport[4] (IATA: HEL, ICAO: EFHK; Finnish: Helsinki-Vantaan lentoasema, Swedish: Helsingfors-Vanda flygplats) is the main international airport of the Helsinki metropolitan region and the whole of Finland with about 16 million passengers annually. It serves as the hub for Finnair, the Finnish flag carrier, as well as a base for Blue1, Norwegian Air Shuttle and Nordic Regional Airlines. The airport is located in the city of Vantaa, about 5 kilometres (3 mi) west of Tikkurila, the centre of Vantaa and 9.2 NM (17.0 km; 10.6 mi) north[1] of Helsinki city center. Helsinki Airport is the leading long-haul airport in Northern Europe and a popular transfer point.

Originally built for the 1952 Summer Olympics in Helsinki, the airport nowadays is the fourth busiest airport in the Nordic countries,[5] with 15,948,760 passengers having used the airport in 2014. This number makes up for 81% of the total number of passengers in Finland's 21 commercial airports combined (18,880,940).[6] making it the busiest airport in Finland by far. It provides jobs for 20,000 people and there are 1,500 companies that operate at this airport.[7] The airport is operated by Finavia, the state-owned enterprise that operates Finland's airports.

As of February 2015, there has been a proposal to rename the airport as "Sibelius Airport" after Jean Sibelius, Finland's most famous composer. The proposal stems from the project group of Jean Sibelius's anniversary year 2015, the foundation for the Sibelius birth city foundation and the Sibelius society. The Finnish government ministers Alexander Stubb, Antti Rinne and Paula Risikko have expressed positive feedback for the proposal.[8][9]

The airport is nominally divided into two terminals, located 250 metres (820 ft) apart and linked by an internal pedestrian connection both airside and landside. In practice, however, the airside parts of the terminal buildings are not divided into Terminal 1 (the former domestic terminal) and Terminal 2 (the former international terminal) but to Schengen and non-Schengen areas. The non-Schengen area of Terminal 2 has been enlarged in 2009 enabling the airport to accommodate eight wide-body aircraft at gates simultaneously. The terminal capacity of the airport is approximately 16–17 million passengers per year.[10] Terminal 1 is used by member airlines of Star Alliance (such as Lufthansa, Scandinavian Airlines and Swiss International Air Lines) and terminal 2 is used by member airlines of Oneworld and Skyteam airline alliances (such as British Airways, Finnair and KLM). Turkish Airlines makes an exception in Star Alliance airlines using Terminal 2.

The airport's three runways provide a platform for future growth while the airport can accommodate wide-body aircraft such as the Airbus A340. The use of three runways allows for efficient clearing away of snow and ice during the winter months to keep the airport open.[12]

There are several airport hotels and office buildings on the grounds of the airport. The Aviapolis is a new international business park adjacent to the Helsinki airport area, already hosting the operations of numerous companies around the airport. Several hotels are located near the airport as well.

In 2013 Finavia announced plans to expand the airport to serve up to 20 million passenger by 2020. The construction is set to begin in 2014 by adding capacity to check-in and transit areas at Terminal 2. The expansion project is estimated to cost 900 million euros. Part of the plan was to build a satellite terminal next to Terminal 2 but the plan was cancelled in favor of expansion under a single terminal building.[14] In September 2014 Finavia revealed more detailed plans for the future expansion that will take place between 2014 and 2020. The Terminals 1 and 2 will be combined and expanded under one roof with new gates (8 additional jet bridges to Terminal 2) and aircraft stands on the apron.[15] The construction of southern wing of Terminal 2 started on 4 January 2016 and western wing starts in 2017.

^1 Some flights operated by MASkargo or ULS Airlines Cargo. 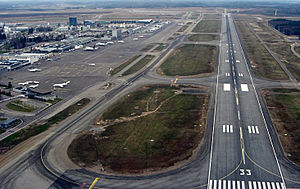 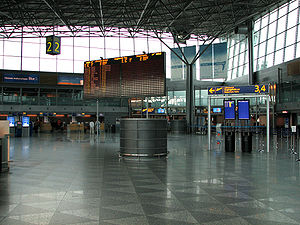 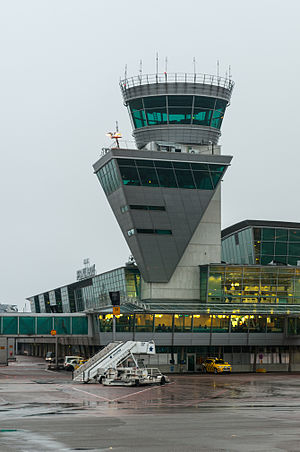 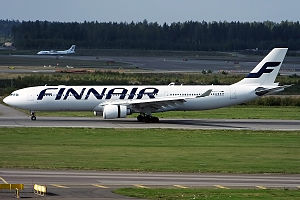 Finnair Airbus A330-300 at Helsinki Airport 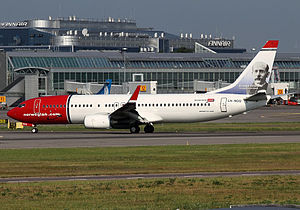 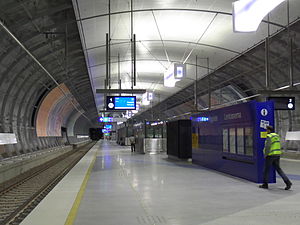 The Ring Rail Line railway link to the airport opened for traffic in July 2015.[25] The new railway serves local commuter trains running at 10-minute intervals at peak periods, although capacity problems have prevented dedicated airport express style trains. The westbound commuter line "I" runs to Helsinki Central station via Huopalahti/Hoplax, while the eastbound commuter line "P" runs to Helsinki Central station via Tikkurila/Dickursby. The trip from the airport underground station to Helsinki Central station takes about 30 minutes and costs 5 euros. Eastbound trains stop at Tikkurila (8 minutes away) where passengers can transfer to trains going away from Helsinki, in the directions of Tampere and Lahti, including lines to Saint Petersburg and Moscow.[26]

There is regular bus service provided by the bus line 615 from the airport to the Helsinki Central railway station in 30–55 minutes, and major hotels and railway stations in the Greater Helsinki Area in 15–120 minutes[citation needed]. The chief operator of these services is the Helsinki Regional Transport Authority. A direct coach service by Finnair is also available to and from the city center (usually about 30 min).

Coach connections, daytime and overnight, to all parts of Finland are provided by Matkahuolto and ExpressBus. They depart from the airport coach terminal.