Hen Wlad Fy Nhadau (Welsh pronunciation: [heːn wlɑːd və ˈn̥adaɨ̞]) is the national anthem of Wales.[1] The title – taken from the first words of the song – means "Old Land of My Fathers" in Welsh, usually rendered in English as simply "Land of My Fathers". The words were written by Evan James and the tune composed by his son, James James, both residents of Pontypridd, Glamorgan, in January 1856.[1][2] The earliest written copy survives and is part of the collections of the National Library of Wales.[2]

Glan Rhondda (Banks of the Rhondda), as it was known when it was composed, was first performed in the vestry of the original Capel Tabor, Maesteg (which later became a working men's club), in either January or February 1856, by Elizabeth John from Pontypridd, and it soon became popular in the locality.[2]

James James, the composer, was a harpist who played his instrument in the public house he ran, for the purpose of dancing.[2] The song was originally intended to be performed in 6/8 time, but had to be slowed down to its present rhythm when it began to be sung by large crowds.

The popularity of the song increased after the Llangollen festival of 1858. Thomas Llewelyn of Aberdare won a competition for an unpublished collection of Welsh airs with a collection that included Glan Rhondda. The adjudicator of the competition, "Owain Alaw" (John Owen, 1821–83) asked for permission to include Glan Rhondda in his publication, Gems of Welsh melody (1860–64). This volume gave Glan Rhondda its more famous title, Hen wlad fy nhadau, and was sold in large quantities and ensured the popularity of the anthem across the whole of Wales.[2]

At the Bangor Eisteddfod of 1874 Hen Wlad fy Nhadau gained further popularity when it was sung by Robert Rees ("Eos Morlais"), one of the leading Welsh soloists of his day.[3] It was increasingly sung at patriotic gatherings and gradually it developed into a national anthem.[2]

Hen wlad fy nhadau was also one of the first Welsh-language songs recorded when Madge Breese sang it on 11 March 1899, for the Gramophone Company, as part of the first recording in the Welsh language.[2][4]

In 1905, Hen Wlad Fy Nhadau became the first national anthem to be sung at the start of a sporting event.[5][6] Although crowds singing anthems during matches was commonplace, there was no precedent for the anthem to be sung before a game commenced in any sport. The Welsh national rugby team were playing host to the first touring New Zealand team, who to that point were unbeaten. After Wales won the Triple Crown in the 1905 Home Nations Championship the match was dubbed the 'Game of the Century' by the press. The New Zealand team started every match with the Haka, and Welsh Rugby Union administrator Tom Williams, suggested that Wales player Teddy Morgan lead the crowd in the singing of the anthem as a response. After Morgan began singing, the crowd joined in,[7] and Wales became the first nation to sing a national anthem at the start of a sporting event.[8]

In 1978 as part of their album, also called Hen Wlad Fy Nhadau, Geraint Jarman a'r Cynganeddwyr recorded a version of the Welsh national anthem using electric guitars, inspired by Jimi Hendrix's rendition of the Star-Spangled Banner. Jarman's version, played by Welsh guitarist Tich Gwilym is one of the most famous modern versions of the song.[6]

Tradition has established Hen Wlad Fy Nhadau as an unofficial Welsh anthem[1] since 1905, when it was first sung by fans at rugby games, although the official national anthem at the time was God Bless the Prince of Wales. Hen Wlad Fy Nhadau slowly established itself as the more popular anthem over the next four decades, and was sung along with God Bless the Prince of Wales and God Save the Queen before sporting events until 1975, when sports officials decided that "Hen Wlad Fy Nhadau" should be sung alone. Like other British anthems, it has not been established as a national anthem by law, but it has been used as a national anthem at official governmental ceremonies, including the opening of the Welsh Assembly, and at receptions of the British monarchy since the 1970s.[2][6] It is recognised and used as an anthem at both national and local events in Wales.

Usually this will be the only anthem sung: only the first stanza and chorus are usually sung (and in the Welsh language). God Save the Queen, the national anthem of the United Kingdom, is sometimes played alongside Hen Wlad fy Nhadau during official events with a royal connection.[6]

The existence of a separate national anthem for Wales has not always been apparent to those from outside the country. In 1993 the newly appointed Secretary of State for Wales John Redwood was embarrassingly videotaped opening and closing his mouth during a communal singing of the national anthem, clearly ignorant of the words but unable to mime convincingly;[9] the pictures were frequently cited as evidence of his unsuitability for the post. According to John Major's autobiography, the first thing Redwood's successor William Hague said, on being appointed, was that he had better find someone to teach him the words. He found Ffion Jenkins, and later married her.[6]

Versions of Hen Wlad fy Nhadau are used as anthems in both Cornwall, as Bro Goth Agan Tasow, and Brittany, as Bro Gozh ma Zadoù.[9] 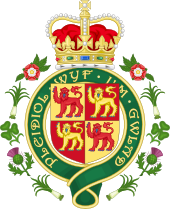 The Royal Badge of Wales

The Welsh poet Dylan Thomas is often quoted as saying "The land of my fathers. My fathers can have it!" in reference to Wales. However, this is misleading, as it was a villainous character in one of Thomas' short stories that spoke this line.

Gwynfor Evans named his history of Wales Land of my fathers: 2,000 years of Welsh history. It was a translation of the Welsh original, Aros Mae.