Hendersonville is a city in Sumner County, Tennessee, on Old Hickory Lake. The population was 51,372 at the 2010 census[4] and 54,068 according 2013 estimates. Hendersonville is part of the Nashville Metropolitan Statistical Area and is located 18 miles northeast of downtown Nashville. The city was settled around 1784 by Daniel Smith, and is named for William Henderson. In 2009 Hendersonville was named as one of the ten best cities for families by Family Circle Magazine.

Hendersonville was settled circa 1784 by Daniel Smith when he began work on Rock Castle.[5] In 1790, William Henderson, for whom the area was named, settled in. With the monumental completion of the Old Hickory Dam in 1954, Hendersonville started to grow into the most populous city of Sumner County and one of the most populous suburbs of Nashville, along with Franklin and Murfreesboro. The city of roughly 250 was incorporated in 1969 under the leadership of L.H. "Dink" Newman,[6] and over the next decades has been one of Tennessee's fastest-growing cities.[6] The city contains around 0.7% of the population of Tennessee. During the Civil War, Monthaven, a historic home on the National Historic Register, was used as a field hospital.

Hendersonville is governed by a board of 12 aldermen and a mayor, known as The Board of Mayor and Aldermen (BOMA).[7][8] The aldermen are elected for staggered terms of four years by district. The mayor is elected once every four years by the whole city.

In 2007 a risk was identified that the trouble-prone Wolf Creek Dam in the neighboring state of Kentucky might break, which could have resulted in a complete inundation for the lower lying parts of Hendersonville. Since then extensive repairs have been performed on the dam, and the maximum level of water behind it has been lowered, thus reducing the pressure of water on the structure and resolving the identified flood risk.

Hendersonville has a humid subtropical climate.

There were 15,823 households out of which 35.7% had children under the age of 18 living with them, 59.3% were married couples living together, 10.7% had a female householder with no husband present, and 26.9% were non-families. 22.3% of all households were made up of individuals and 6.5% had someone living alone who was 65 years of age or older. The average household size was 2.55 and the average family size was 3.00.

Rhoades Car has its national headquarters in Hendersonville. It is the home of the Indian Lake Village business, shopping, residence, and recreation complex.

Hendersonville Arts Council,[14] is a non-profit organization and housed in Monthaven Mansion (built before the Civil War and used as a hospital during several battles, where entertaining paranormal activity is now alleged to occur frequently. It is also on the National Register of Historic Places, the Tennessee Civil War Trail and Ring of Fire) and exhibits visual art, music, workshops, wine tastings, crafts, culinary demonstrations, performances, and cultural activities. They produce a long running summer concert series and are open daily for self-guided tours.

Hendersonville Performing Arts Center,[15] is a non-profit theater (formerly known as Steeple Players Theatre). HPAC has presented family oriented theater productions since 1996. Since 2003, it has been located in the City Square Shopping Center. 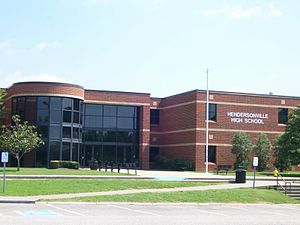 Hendersonville's schools are governed by the Sumner County Board of Education. The twelve-member group consists of eleven elected representatives from each of the eleven educational districts in the county, as well as the Director of Schools, Del Phillips. The members serve staggered four-year terms; the Director serves under contract with the Board of Education. Don Long serves as the Chairman of the Board for the 2013-14 year. The board conducts monthly meetings that are open to the public. The school system’s General Purpose School Fund budget during the 2013-14 school year was approximately $203 million.