Henri, Count of Chambord (French: Henri Charles Ferdinand Marie Dieudonné d'Artois, duc de Bordeaux, comte de Chambord; 29 September 1820 – 24 August 1883)[1] was disputedly King of France from 2 to 9 August 1830 as Henry V, although he was never officially proclaimed as such. Afterwards, he was the Legitimist pretender to the throne of France from 1844 to 1883. He was nearly received as King in 1871 and 1873.

Henri was the posthumous son of Charles Ferdinand, Duke of Berry, younger son of Charles X of France, by his wife, Princess Carolina of Naples and Sicily, daughter of King Francis I of the Two Sicilies. As the grandson of Charles X, Henri was a Petit-Fils de France. He was also the last legitimate descendant in the male line of Louis XV of France. 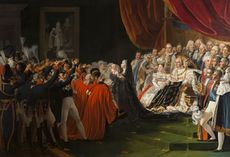 The Duchess of Berry presents her son Henri, Duke of Bordeaux, to the French court and Royal Family

Henri d'Artois was born on 29 September 1820, in the Pavillon de Marsan, a portion of the Tuileries Palace which still survives in the compound of the Louvre Palace in Paris. His father, the duc de Berry, had been assassinated seven months before his birth. At the actual moment of Henri's birth, no member of the French court was present in the room; this enabled the supporters of Louis Philippe, duc d'Orléans to later spread the canard that Henri was not in fact a French prince.[citation needed]

At birth, Henri was given the title of duc de Bordeaux. Because of his posthumous birth when the senior male line of the House of Bourbon was on the verge of extinction, he was given the name Dieudonné ("God-given"). Royalists called him "the miracle child". 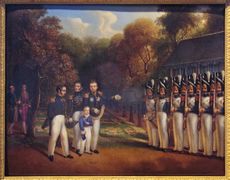 The young Prince Henri inspecting the royal guard at Rambouillet on 2 August 1830.[2]

On 2 August 1830, in response to the July Revolution, Henri's grandfather, Charles X, abdicated, and twenty minutes later Charles' elder son Louis Antoine, duc d'Angoulême, also abdicated in favor of the young duc de Bordeaux. Charles X urged his cousin Louis Philippe of Orléans, as Lieutenant général du royaume, to proclaim Henri as Henri V, King of France, but Louis Philippe ignored him. As a consequence, after seven days, a period in which legitimist monarchists considered that Henri had been the rightful monarch of France, the National Assembly decreed that the throne should pass to Louis Philippe, who was proclaimed King of the French on 9 August.[3]

Henri and his family left France and went into exile on 16 August 1830. While some French monarchists recognized him as their sovereign, others disputed the validity of the abdications of his grandfather and of his uncle[citation needed]. Still others recognised the July Monarchy of Louis Philippe. With the death of his 79-year-old grandfather in 1836 and of his uncle in 1844, young Henri became the genealogically senior claimant to the French throne. His supporters were called Legitimists to distinguish them from the Orléanists, the supporters of the family of Louis Philippe.

Henri, who preferred the courtesy title of comte de Chambord (from the château de Chambord, which had been presented to him by the Restoration government, and which was the only significant piece of personal property of which he was allowed to retain ownership upon his exile), continued his claim to the throne throughout the July Monarchy of Louis Philippe, the Second Republic, the Second Empire of Napoléon III, and the Third Republic.

In November 1846, the comte de Chambord married his second cousin Archduchess Maria Theresa of Austria-Este, daughter of Duke Francis IV of Modena and Princess Maria Beatrice of Savoy. The couple had no children. 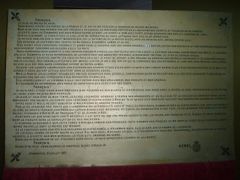 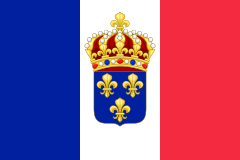 In the early 1870s, as the Second Empire collapsed following its defeat in the Franco-Prussian War at the battle of Sedan on 1 September 1870, the royalists became a majority in the National Assembly. The Orléanists agreed to support the aging comte de Chambord's claim to the throne, with the expectation that at his childless death he would be succeeded by their own claimant, Philippe d'Orléans, comte de Paris. Henri was then pretender for both Legitimists and Orléanists, and the restoration of monarchy in France seemed a close possibility. However, Henri insisted that he would accept the crown only on condition that France abandon its tricolour flag and return to the use of the white fleur de lys flag.[5] He rejected a compromise, whereby the fleur-de-lys would be the new king's personal standard, and the tricolour would remain the national flag.

A temporary Third Republic was established, to wait for Henri's death and his replacement by the more liberal Comte de Paris. But by the time this occurred in 1883, public opinion had swung behind the Republic as the form of government which, in the words of the former President Adolphe Thiers, "divides us least". Thus, Henri could be mockingly hailed by republicans such as Georges Clemenceau as "the French Washington" — the one man without whom the Republic could not have been founded.

Henri died on 24 August 1883 at his residence in Frohsdorf, Austria, at the age of sixty-two. He was buried in his grandfather Charles X's crypt in the church of the Franciscan Kostanjevica Monastery in Gorizia, then Austria, now in Slovenian city of Nova Gorica. His personal property, including the château de Chambord, was left to his nephew, Robert I, Duke of Parma (son of Henri's late sister).

Henri's death left the Legitimist line of succession distinctly confused. On one hand, Henri himself had accepted that the head of the Maison de France (as distinguished from the Maison de Bourbon) would be the head of the Orléans line, i.e. the Comte de Paris. This was accepted by many Legitimists, and was the default on legal grounds; the only surviving Bourbon line more senior was the Spanish branch, which had renounced its right to inherit the throne of France as a condition of the Treaty of Utrecht. However, many if not most of Henri's supporters, including his widow, chose to disregard his statements and this law, arguing that no one had the right to deny to the senior direct-male-line male Bourbon to be the head of the Maison de France and thus the legitimate King of France; the renunciation of the Spanish branch is under this interpretation illegitimate and therefore void. Thus these Legitimists settled on Juan, Count of Montizón, the Carlist pretender to the Spanish throne (the Salic law having been suspended in Spain, the actual king, Alfonso XII, was not the senior descendant in the male line), as their claimant to the French crown.