Henri (Luxembourgish: Henri Albert Gabriel Félix Marie Guillaume;[needs IPA][1] born 16 April 1955) is the current Grand Duke of Luxembourg, reigning since 7 October 2000. He is the eldest son of Grand Duke Jean and Princess Joséphine Charlotte of Belgium, and a first cousin of the current King of the Belgians, Philippe. 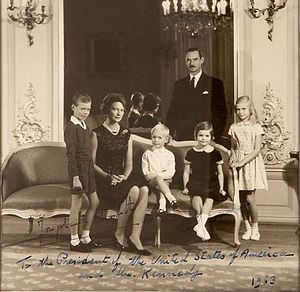 Henri (far left) with his parents and siblings in 1963

Henri became Grand Duke of Luxembourg on 7 October 2000. He was educated in Luxembourg and in France, where he obtained his baccalaureate in 1974. He then studied political science at University of Geneva and the Graduate Institute of International Studies, graduating in 1980. The Grand Duke also undertook military officer training at the Royal Air Force College Cranwell, England.

While studying in Geneva, Henri met the former María Teresa Mestre y Batista, who was also a political science student. They married in Luxembourg on 4 February/14 February 1981 with the previous consent of the Grand Duke, dated 7 November 1980.

The couple have five children:

Prince Henri became heir apparent to the Luxembourg throne on the abdication of his paternal grandmother, Grand Duchess Charlotte of Luxembourg, on 12 November 1964. From 1980 to 1998, he was a member of the Council of State.

Henri's full name, style and title is: His Royal Highness Henri, by the Grace of God, Grand Duke of Luxembourg, Duke of Nassau, Count Palatine of the Rhine, Count of Sayn, Königstein, Katzenelnbogen and Diez, Burgrave of Hammerstein, Lord of Mahlberg, Wiesbaden, Idstein, Merenberg, Limburg and Eppstein.

With the exception of Grand Duke of Luxembourg, all the titles refer to places in modern Germany, particularly in the House of Nassau's ancestral region of Nassau.

However, on ascending the throne, Grand Duke Henri relinquished the styling "by the Grace of God", and in the laws, decrees, and official documents his name and title is: "Henri, Grand Duke of Luxembourg, Duke of Nassau".

On 2 December 2008 it was announced that Grand Duke Henri had stated he would refuse to ratify a new law on euthanasia that had been approved earlier in the year by the Chamber of Deputies. The signature of the Grand Duke was required under the Constitution in order for the law to take effect. In the absence of clarity on the long-term implications for the constitutional position of the Grand Duke posed by such a refusal, it was announced by the Prime Minister, Jean-Claude Juncker, that a constitutional amendment would be brought forward whereby the signature of the monarch would no longer be necessary for laws to be enacted. This would remove one of the legislative roles of the Grand Duke, namely the approving of new legislation. The Luxembourg royal house had tried to block a decision by parliament only once before, when Grand Duchess Marie-Adelaide refused to sign an education bill in 1912. The ultimate solution was that the Grand Duke would be declared unable to perform his duty temporarily; this was similar to the 'escape route' provided to his uncle King Baudouin of Belgium when he refused to sign an abortion law in 1991, and thus the law could take effect without the signature of the Grand Duke, but also without the need to enact far-reaching changes in the constitution. A constitutional amendment, which changed the formulation of the role of the Grand Duke or Duchess in such a way as to make it clear that his signature is automatic and that he/she has no freedom of decision was nevertheless eventually passed. The head of state no longer has to sanction laws for them to take effect; he merely promulgates them.[2] 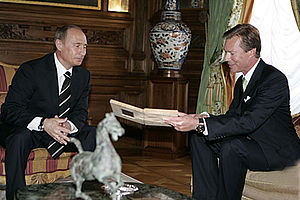 The Grand Duke with Vladimir Putin in May 2007

As the head of a constitutional monarchy, Grand Duke Henri's duties are primarily representative. However, he retains the constitutional power to appoint the Prime Minister and Government, to dissolve the Chamber of Deputies, to promulgate laws and to accredit ambassadors.

Grand Duke Henri is Commander-in-Chief of the Luxembourg Army, in which he holds the rank of General. He is also an Honorary Major in the British Parachute Regiment.

One of the Grand Duke's main functions is to represent Luxembourg in the field of foreign affairs. In May 2001, Grand Duke Henri and Grand Duchess Maria Teresa undertook their first foreign state visit to Spain, at the invitation of King Juan Carlos and Queen Sofia.

Grand Duke Henri is a member of the International Olympic Committee, a member of The Mentor Foundation (established by the World Health Organisation) and a Director of the Charles Darwin Trust for the Galápagos Islands.

The Grand Duke lives with his family at Berg Castle in Luxembourg. He also has a holiday home at Cabasson, near Bormes-les-Mimosas in the south of France. 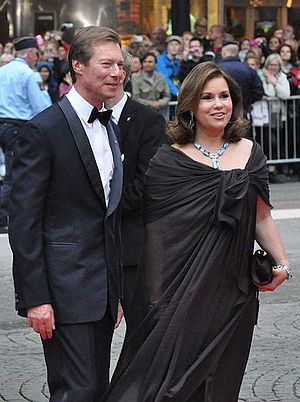 Since the accession of Henri to the Grand Ducal Throne in 2000, the Court's approach to media and publicity has varied markedly. In 2002, Grand Duke Henri expressly identified himself with a press conference called by Grand Duchess Maria Teresa with a view to discussing with journalists the shortcomings of her personal relations with her mother-in-law, Grand Duchess Joséphine-Charlotte.

In contrast, when the grand ducal couple's first grandchild was born in 2006, the Court Circular pointedly omitted to mention the event, probably as the father Prince Louis was not married at the time. However, the pregnancy was announced in 2005, so the country was informed that the prince and his girlfriend were going to be parents. The press also had access to the child's baptism.

The Grand Ducal Family's approach to media and publicity issues has itself given rise to media comment regarding the quality of communications advice which has been sought and followed. As well as the public airing of the difficulties between the Grand Duchess and her mother-in-law, several other events have resulted in adverse publicity, most notably: in 2004, the opening of Parliament by the Grand Duke in person, the first time in over 100 years the Monarch had done so; in 2005, the Grand Duke announced he intended to vote in favour of the European Constitution in the impending referendum, only to be reminded by senior politicians that he had no such right; the proposed sale of large tracts of the Gruenewald in the summer of 2006 shortly followed by the proposed sale (cancelled shortly afterwards) at Sotheby's of recently deceased Grand Duchess Joséphine-Charlotte's effects.[3]

On 3 February 2011, Henri was admitted to the Centre Hospitalier de Luxembourg on falling ill. Shortly after, the Grand Ducal Court issued a statement saying that he was to undergo an angioplasty. The day after, the Communications Chief announced that the surgery had been a success. "The state of His Royal Highness' health is not disturbing," the statement read, before stating the Grand Duke may leave the hospital within the next few days. Although the reason has not formally been disclosed, it is reported that the Grand Duke felt ill after waking that day, and the Court Physician noticed circulation problems. It was then that he was rushed to hospital, to the cardiac unit, and was discharged the following day.

See also: List of honours of the Luxembourgish Grand-Ducal Family by country

The Grand Duke's style and title in full: His Royal Highness Henri by the Grace of God, Grand Duke of Luxembourg, Duke of Nassau, Prince of Bourbon-Parma, Count Palatine of the Rhine, Count of Sayn, Königstein, Katzenelnbogen and Diez, Burgrave of Hammerstein, Lord of Mahlberg, Wiesbaden, Idstein, Merenberg, Limburg and Eppstein