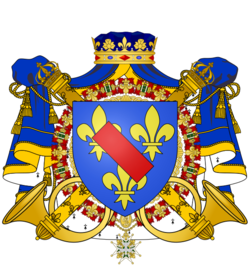 Henri de Bourbon (1 September 1588 – 26 December 1646) became Prince of Condé shortly after his birth, following the death of his father Henri I. As a member of the reigning (from 1589) House of Bourbon, he was a Prince du Sang.

He married Charlotte Marguerite de Montmorency in 1609 and had three children, all of them protagonists of the Fronde.

Reportedly, Henry IV fancied Charlotte and arranged a marriage with Condé to provide cover for an affair. But Condé escaped with his wife first to Brussels and later to Milan. Since both places were under House of Habsburg rule, the Condé affair became part of an international conflict during the War of the Jülich Succession (one of the precursors to the Thirty Years' War).