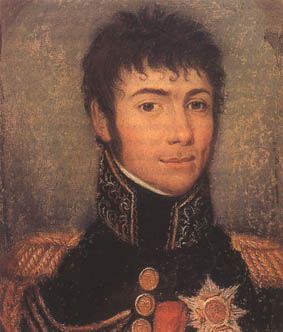 He was born at Châteauroux, Indre as a member of a well-to-do bourgeois family.[1]

At the outbreak of the French Revolution, he had just finished his studies at the Prytanée National Militaire, and he entered the army as a volunteer. During the expedition to Egypt, Napoleon named him colonel (1798), then brigadier-general, and after the Battle of Austerlitz his aide-de-camp. His life was henceforth closely bound up with that of Napoleon, who had the fullest confidence in him, honoring him in 1808 with the title of count and at the end of 1813, with the title of Grand Marshal of the Palace. It was Bertrand who in 1809 directed the building of the bridges by which the French army crossed the Danube at Wagram. In 1811, the Emperor appointed Bertrand governor of the Illyrian Provinces and during the German campaign of 1813, he commanded IV Corps which he led in the battles of Grossbeeren, Dennewitz and Leipzig.[1]

In 1813, after the Battle of Leipzig, it was due to his initiative that the French army was not totally destroyed. He accompanied the Emperor to Elba in 1814, returned with him in 1815, held a command in the Waterloo campaign, and then, after the defeat, accompanied Napoleon to St. Helena. Condemned to death in 1816, he did not return to France until after Napoleon's death, and then Louis XVIII granted him amnesty allowing him to retain his rank. Bertrand was elected deputy in 1830 but defeated in 1834. In 1840 he was chosen to accompany the prince de Joinville to St. Helena to retrieve and bring Napoleon's remains to France, in what became known as the retour des cendres.[1]

He died at Châteauroux on 31 January 1844 and was buried in Les Invalides. [1] Alexandre Dumas (1802-1870) mentions Bertrand in the earlier pages of his well-known "The Count of Monte Cristo."