Henri Marie Raymond de Toulouse-Lautrec-Monfa (24 November 1864 – 9 September 1901), also known as Henri de Toulouse-Lautrec (French: [ɑ̃ʁi də tuluz lotʁɛk]) was a French painter, printmaker, draughtsman and illustrator whose immersion in the colourful and theatrical life of Paris in the late 19th century allowed him to produce a collection of enticing, elegant and provocative images of the modern, sometimes decadent, life of those times. Toulouse-Lautrec is among the best-known painters of the Post-Impressionist period, alongside Cézanne, Van Gogh and Gauguin. In a 2005 auction at Christie's auction house, La Blanchisseuse, his early painting of a young laundress, sold for US$22.4 million and set a new record for the artist for a price at auction.[1]

Henri Marie Raymond de Toulouse-Lautrec-Monfa was born at the Hôtel du Bosc in Albi, Tarn in the Midi-Pyrénées region of France, the firstborn child of Comte Alphonse Charles de Toulouse-Lautrec-Monfa (1838–1913)[2] and wife Adèle Zoë Tapié de Celeyran (1841–1930).[3] The last part of his name means he was a member of an aristocratic family (descendants of the Counts of Toulouse and Lautrec and the Viscounts of Montfa, a village and commune of the Tarn department of southern France). His younger brother was born in 1867, but died the following year.

After the death of his brother, Henri's parents separated and a nanny ended up taking care of him.[4] At the age of eight, Henri went to live with his mother in Paris where he drew sketches and caricatures in his exercise workbooks. The family quickly realised that Henri's talents lay in drawing and painting. A friend of his father, René Princeteau, visited sometimes to give informal lessons. Some of Henri's early paintings are of horses, a speciality of Princeteau, and a subject Lautrec revisited in his 'Circus Paintings'.[4][5]

In 1875, Toulouse-Lautrec returned to Albi because his mother had concerns about his health. He took thermal baths at Amélie-les-Bains and his mother consulted doctors in the hope of finding a way to improve her son's growth and development.[4]

Toulouse-Lautrec's parents, the Comte and Comtesse, were first cousins (his grandmothers were sisters),[4] and he suffered from congenital health conditions sometimes attributed to a family history of inbreeding.[6]

At age 13, Toulouse-Lautrec fractured his right femur. At age 14, he fractured his left.[7] The breaks did not heal properly. Modern physicians attribute this to an unknown genetic disorder, possibly pycnodysostosis (sometimes known as Toulouse-Lautrec Syndrome),[8] or a variant disorder along the lines of osteopetrosis, achondroplasia, or osteogenesis imperfecta.[9] Rickets aggravated by praecox virilism has also been suggested. Afterwards, his legs ceased to grow, so that as an adult he was extremely short (4 ft 8 in (1.42 m)).[10] He developed an adult-sized trunk, while retaining his child-sized legs.[11] Additionally, he is reported to have had hypertrophied genitals.[12]

Physically unable to participate in many activities enjoyed by males his age, Toulouse-Lautrec immersed himself in art. He became an important Post-Impressionist painter, art nouveau illustrator, and lithographer, and, through his works, recorded many details of the late-19th-century bohemian lifestyle in Paris. Toulouse-Lautrec contributed a number of illustrations to the magazine Le Rire during the mid-1890s.[citation needed]

After initially failing college entrance exams, he passed his second attempt and completed his studies. 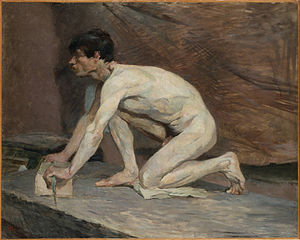 During a stay in Nice, France, his progress in painting and drawing impressed Princeteau, who persuaded Toulouse-Lautrec's parents to let him return to Paris and study under the acclaimed portrait painter Léon Bonnat. Toulouse-Lautrec's mother had high ambitions and, with the aim of her son becoming a fashionable and respected painter, used their family's influence to get him into Bonnat's studio.[4] He was drawn to Montmartre, the area of Paris famous for its bohemian lifestyle and the haunt of artists, writers, and philosophers. Studying with Bonnat placed Henri in the heart of Montmartre, an area he rarely left over the next 20 years.

After Bonnat took a new job, Henri moved to the studio of Fernand Cormon in 1882 and studied for a further five years and established the group of friends he kept for the rest of his life. At this time he met Émile Bernard and Vincent van Gogh. Cormon, whose instruction was more relaxed than Bonnat's, allowed his pupils to roam Paris, looking for subjects to paint. During this period, Toulouse-Lautrec had his first encounter with a prostitute (reputedly sponsored by his friends), which led him to paint his first painting of a prostitute in Montmartre, a woman rumoured to be Marie-Charlet.[4] During this time, he discovered the intimate relations many of these sex workers had with one another. Depicting these relationships become a focus of his work for a brief period. His portrayal of lesbianism is worth noting because he did not fetishize these women’s sexual intimacy nor paint them on display for the male gaze. Instead, through works such as The Two Friends, he is able to portray the taboo intimacies of queer Parisian women with humanity and sensitivity. 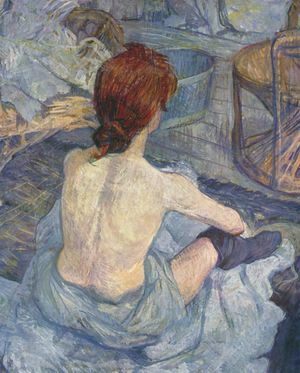 With his studies finished, in 1887 he participated in an exposition in Toulouse using the pseudonym "Tréclau", the verlan of the family name 'Lautrec'. He later exhibited in Paris with Van Gogh and Louis Anquetin.[4] The Belgian critic Octave Maus invited him to present eleven pieces at the Vingt (the Twenties) exhibition in Brussels in February. Van Gogh's brother Theo bought Poudre de Riz (Rice Powder) for 150 francs for the Goupil & Cie gallery.

From 1889 until 1894, Toulouse-Lautrec took part in the Independent Artists' Salon (French: Société des Artistes Indépendants) on a regular basis. He made several landscapes of Montmartre.[4] Tucked deep into Montmartre in the garden of Monsieur Pere Foret, Toulouse-Lautrec executed a series of pleasant plein-air paintings of Carmen Gaudin, the same red-headed model who appears in The Laundress (1888).

When the Moulin Rouge cabaret opened, Henri was commissioned to produce a series of posters. His mother had left Paris and, though he had a regular income from his family, making posters offered him a living of his own. Other artists looked down on the work, but he ignored them.[14] The cabaret reserved a seat for him and displayed his paintings.[15] Among the well-known works that he painted for the Moulin Rouge and other Parisian nightclubs are depictions of the singer Yvette Guilbert; the dancer Louise Weber, known as the outrageous La Goulue (The Glutton) who created the French Can-Can; and the much more subtle dancer Jane Avril. 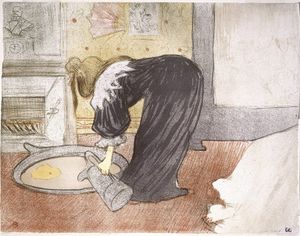 Henri de Toulouse-Lautrec's family were Anglophiles,[16] so, though not as fluent as he pretended to be, he spoke English well enough to travel to London.[14] He was commissioned by the J.& E. Bella company to make a poster advertising their confetti (which was banned after the 1892 Mardi Gras)[17] and the bicycle advert La Chaîne Simpson.[18]

While in London, he met and befriended Oscar Wilde.[14] When Wilde faced imprisonment in Britain, Toulouse-Lautrec became a very vocal supporter of his and his portrait of Oscar Wilde was painted the same year as Wilde's trial.[14][19]

Toulouse-Lautrec was mocked for his short stature and physical appearance, which led him to drown his sorrows in alcohol.[20]

He initially only drank beer and wine, but his tastes expanded into hard liquor, namely absinthe.[21] The cocktail Earthquake (Tremblement de Terre) is attributed to Toulouse-Lautrec: a potent mixture containing half absinthe and half cognac in a wine goblet.[22] To ensure he was never without alcohol, Toulouse-Lautrec hollowed out his cane (which he needed to walk due to his underdeveloped legs) and filled it with liquor.[14][23]

In addition to his growing alcoholism, Toulouse-Lautrec also frequented prostitutes.[21] Toulouse-Lautrec was fascinated by their lifestyle and the lifestyle of the "urban underclass" and incorporated those characters into his paintings.[24] Fellow painter Édouard Vuillard later said that while Toulouse-Lautrec did engage in sex with prostitutes, "the real reasons for his behavior were moral ones [...] Lautrec was too proud to submit to his lot, as a physical freak, an aristocrat cut off from his kind by his grotesque appearance. He found an affinity between his own condition and the moral penury of the prostitute."[25] 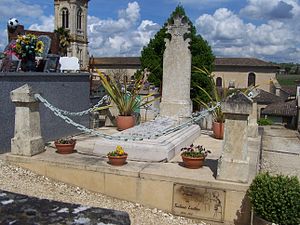 By February 1899, Toulouse-Lautrec's alcoholism began to take its toll and he collapsed due to exhaustion and the effects of alcoholism. His family had him committed to Folie Saint-James, a sanatorium in Neuilly for three months.[26] While he was committed, Toulouse-Lautrec drew 39 circus portraits. After his release, Toulouse-Lautrec returned to the Paris studio for a time and then traveled throughout France.[27] His physical and mental health began to decline rapidly due to alcoholism and syphilis, which he reportedly contracted from Rosa La Rouge, a prostitute who was the subject of several of his paintings.[28]

On 9 September 1901, at the age of 36, he died from complications due to alcoholism and syphilis at the family estate, Château Malromé in Saint-André-du-Bois. He is buried in Cimetière de Verdelais, Gironde, a few kilometres from the estate.[28][29] Toulouse-Lautrec's last words reportedly were "French: Le vieux con!" ("the old fool"). This was his goodbye to his father.[14] Although in another version, he used the word "hallali", a term used by huntsmen at the moment the hounds kill their prey: "I knew, papa, that you wouldn't miss the death." (French: Je savais, papa, que vous ne manqueriez pas l'hallali).[30] 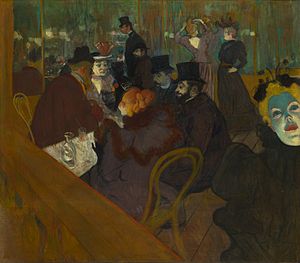 Self-portrait in the crowd, At the Moulin Rouge, 1892, Art Institute of Chicago

In his less-than-20-year career, Toulouse-Lautrec created:

His debt to the Impressionists, particularly the more figurative painters like Manet and Degas, is apparent, for within his works, one can draw parallels to the detached barmaid at A Bar at the Folies-Bergère by Manet and the behind-the-scenes ballet dancers of Degas. His style was also influenced by the classical Japanese woodprints which became popular in art circles in Paris.[citation needed]

He excelled at depicting people in their working environments, with the colour and movement of the gaudy nightlife present but the glamour stripped away. He was a master at painting crowd scenes where each figure was highly individualized. At the time they were painted, the individual figures in his larger paintings could be identified by silhouette alone, and the names of many of these characters have been recorded.[citation needed] His treatment of his subject matter, whether as portraits, in scenes of Parisian nightlife, or as intimate studies, has been described as alternately "sympathetic" and "dispassionate".[citation needed]

Toulouse-Lautrec's skilled depiction of people relied on his painterly style, which is highly linear and emphasizes contour. He often applied paint in long, thin brushstrokes which would leave much of the board underneath showing through. Many of his works may be best described as "drawings in coloured paint".[citation needed]

Henri de Toulouse-Lautrec has been the subject of two biographical films and has been portrayed in others.