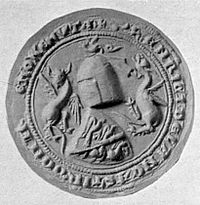 Seal of Henry of Lancaster from the Barons' Letter, 1301, which he signed as Henricus de Lancastre, Dominus de Munemue (Henry of Lancaster, Lord of Monmouth). His shield couche shows the armorial of Plantagenet differenced by a bend azure (see below)

Henry, 3rd Earl of Leicester and Lancaster (c. 1281 – 22 September 1345) was an English nobleman, one of the principals behind the deposition of Edward II of England.

He was the younger son of Edmund Crouchback, 1st Earl of Lancaster, Earl of Leicester,[1] who was a son of King Henry III by his wife Eleanor of Provence. Henry's mother was Blanche of Artois, Queen Dowager of Navarre.

Henry's elder brother Thomas, 2nd Earl of Lancaster, succeeded their father in 1296, but Henry was summoned to Parliament on 6 February 1298/99 by writ directed to Henrico de Lancastre nepoti Regis ("Henry of Lancaster, nephew of the king", Edward I), by which he is held to have become Baron Lancaster. He took part in the Siege of Caerlaverock in July 1300.

Petition for succession and inheritance

After a period of longstanding opposition to King Edward II and his advisors, including joining two open rebellions, Henry's brother Thomas was convicted of treason, executed and had his lands and titles forfeited in 1322. Henry did not participate in his brother's rebellions; he later petitioned for his brother's lands and titles, and on 29 March 1324 he was invested as Earl of Leicester. A few years later, shortly after his accession in 1327, the young Edward III of England returned the earldom of Lancaster to him, along with other lordships such as that of Bowland.

On the Queen's return to England in September 1326 with Roger Mortimer, 1st Earl of March, Henry joined her party against King Edward II, which led to a general desertion of the king's cause and overturned the power of Hugh le Despenser, 1st Earl of Winchester, and his namesake son Hugh the younger Despenser.

He was sent in pursuit and captured the king at Neath in South Wales. He was appointed to take charge of the king and was responsible for his custody at Kenilworth Castle.

Henry was appointed "chief advisor" for the new king Edward III of England,[2] and was also appointed captain-general of all the king's forces in the Scottish Marches.[3] He was appointed Constable of Lancaster Castle and High Sheriff of Lancashire in 1327. He also helped the young king to put an end to Mortimer's regency and tyranny, also had him declared a traitor and executed in 1330.

According to Froissart, he was nicknamed Wryneck, or Tort-col in French, possibly due to a medical condition.[citation needed]

He was succeeded as Earl of Lancaster and Leicester by his eldest son, Henry of Grosmont, who subsequently became Duke of Lancaster.

Henry and Maud had seven children:

Prior to his restoration to his earldoms, Henry bore the arms of the kingdom, differenced by a bend azure. Upon his restoration, his difference changed, to a label France of three points (that is to say azure three fleur-de-lys or, each).[5]

Henry is a supporting character in Les Rois maudits (The Accursed Kings), a series of French historical novels by Maurice Druon. He was portrayed by fr (William Sabatier) in the 1972 French miniseries adaptation of the series, and by fr (Romain Rondeau) in the 2005 adaptation.[6]