Henry (Portuguese: Henrique, French: Henri; 1066–1112), the father of the first king of Portugal, Afonso Henriques, was the first member of the House of Burgundy to rule the County of Portugal.

Born in 1066 in Dijon, Duchy of Burgundy, Count Henry was the youngest son of Henry, the second son of Robert I, Duke of Burgundy.[1][2] His two older brothers, Hugh I and Odo, inherited the duchy.[2] Even though his mother Sibylla is often mentioned in traditional genealogies as the daughter of Berenguer Ramon I, Count of Barcelona, and his wife Guisla de Lluçà, this filiation is not recorded in any medieval charter. Sibylla may have been the daughter of Reginald I, which would make her the maternal aunt of Raymond of Burgundy who would be, if these filiations are correct, Henry’s first cousin.[3][lower-alpha 1]

One of his paternal aunts was Constance of Burgundy, the wife of Alfonso VI of León, and one of his grand-uncles was Hugh, Abbot of Cluny, one of the most influential and venerated personalities of his time.[1] Count Henry’s family was very powerful and governed many cities in France such as Chalon, Auxerre, Autun, Nevers, Dijon, Mâcon y Semur.[1]

After the defeat of the Christian troops in the Battle of Sagrajas in October 1086, in the early months of the following year, King Alfonso VI appealed for aid from Christians at the other side of the Pyrenees. Many French nobles and soldiers heeded the call, including Raymond of Burgundy, Henry's brother, Duke Odo, and Raymond of St. Gilles,[4] Not all of them arrived at the same time in the Iberian Peninsula and it is most likely that Raymond of Burgundy came in 1091.[5][lower-alpha 2] Although some authors claim that Count Henry came with the expedition which arrived in 1087, even though "documentary evidence here is much more slight",[7] his presence is confirmed only as of 1096 when he appears confirming the fueros of Guimarães and Constantim de Panoias. 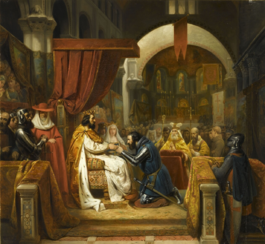 Alfonso VI of León and Castile appoints Henry to the County of Portugal, in 1096.

Pact with his cousin Raymond of Burgundy

Between the first quarter of 1096 and the end of 1097, count Raymond, seeing that his influence in the Curia Regis was diminishing, reached an agreement with his cousin Henry of Burgundy, who had not yet been appointed governor of Portugal. The birth of King Alfonso's only son, Sancho Alfónsez, was also perceived as a threat by the two cousins. They agreed to share power, the royal treasury, and to support each other.[9] Under this agreement, which counted with the blessings of their relative, the Abbot of Cluny,[lower-alpha 3] Raymond "promised his cousin under oath to hand him over the Kingdom of Toledo and one–third of the royal treasury upon the death of King Alfonso VI". If he could not deliver Toledo, he would give him Galicia. Henry, in turn, promised to help Raymond "obtain all the dominions of King Alfonso and two–thirds of the royal treasury".[11][12] It seems that news of this pact reached the king who, in order to counter the initiative of his two sons-in-law, appointed Henry governor of the region extending a flumine mineo usque in tagum (from the Minho River to the banks of the Tagus).[13] Until then, this region had been governed by count Raymond who saw his power limited to just Galicia.[14][lower-alpha 4]

Accordingly, both cousins instead of being allies, became rivals with conflicting interests; the succession pact went up in smoke and, henceforth, each would try to garner the favor of King Alfonso.[16]

Independence of the County of Portugal 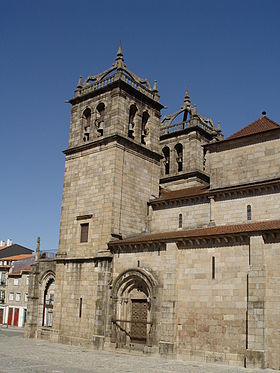 View of the South side of Braga Cathedral where Henry, Count of Portugal was buried

Upon the death of Count Raymond of Burgundy, his widow, Queen Urraca, Teresa's half-sister, Count Henry's wife, married Alfonso the Battler for political and strategic reasons. Henry took advantage of the family conflicts and political unrest and declared the independence of the County of Portugal.

Caught under siege in Astorga by Alfonso I of Aragon, Henry held the city with the help of Alfonso's wife, Urraca. Henry died on 12 May 1112,[17] from wounds received during the siege.[18] His remains were transferred, following his previous orders, to Braga where he was buried in a chapel at Braga Cathedral the building of which he had promoted.[19] After his death, his widow Teresa governed the county since their son Afonso was only three years old at that time.[20]

Count Henry was the leader of a group of gentlemen, monks, and clerics of French origin who exerted great influence in the Iberian Peninsula, promoted many reforms and introduced several institutions from the other side of the Pyrenees, such as the customs of Cluny and the Roman Rite. They occupied relevant ecclesiastical and political positions which provoked a strong backlash during the last years of the reign of King Alfonso VI.[21]

He married Teresa of León around 1095.[22] From Teresa, Henry had three sons and three daughters of whom four survived to adulthood: