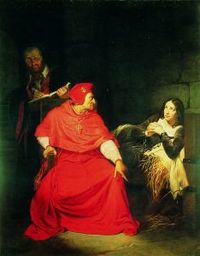 Henry Beaufort (born about 1375, died 11 April 1447) was a medieval English clergyman, Bishop of Winchester,[1] a member of the royal house of Plantagenet,[2] and a Cardinal of the Roman Catholic Church.[1]

The second of the four children of John of Gaunt and his mistress (later wife) Katherine Swynford, Beaufort was born in Anjou, an English domain in France, and educated for a career in the Church. After his parents were married in early 1396, Henry, his two brothers and one sister were declared legitimate by the Pope Boniface IX and legitimated by Act of Parliament on 9 February 1397, but they were barred from the succession to the throne.[3][4][5] This later proviso was promulgated with the exact phrase excepta regali dignitate (English: the royal dignity excepted) by their half-brother Henry IV with dubious authority.[citation needed] On 27 February 1398, he was nominated Bishop of Lincoln, and on 14 July 1398, he was consecrated.[6] After his half-brother Henry of Bolingbroke deposed Richard II and took the throne as Henry IV in 1399,[citation needed] he made Bishop Beaufort Lord Chancellor of England (as of 1403).[7] Beaufort resigned that position in 1404 when he was appointed Bishop of Winchester on 19 November.[8]

Between 1411 and 1413, Bishop Beaufort was in political disgrace for siding with his nephew, the Prince of Wales, against the king, but when King Henry IV died and the prince became King Henry V,[citation needed] he was made Chancellor once again in 1413, but he resigned the position in 1417.[7] Pope Martin V offered him the rank of Cardinal, but King Henry V would not permit him to accept the offer.

Henry V died in 1422, shortly after making himself heir to the throne of France by marrying Catherine of Valois, the daughter of King Charles VI. Their infant son Henry VI, the Bishop's greatnephew, succeeded him. Bishop Beaufort and the child king's other uncles formed the Regency Government of England 1422-1437,[citation needed] and in 1424, Beaufort became Chancellor once more, but was forced to resign in 1426 because of disputes with the king's other uncles.[7]

Pope Martin V finally appointed Beaufort as Cardinal in 1426.[7] In 1427, he made him the Papal Legate for Germany, Hungary, and Bohemia, and directed him to lead the fourth "crusade" against the Hussites heretics in Bohemia. Beaufort's forces were routed by the Hussites at the Battle of Tachov on 4 August 1427.[9]

When the English captured Joan of Arc in 1431, Beaufort was present to observe some of the heresy trial sessions presided over by Bishop Pierre Cauchon of Beaumaris. He was also present at her execution. Records claim that he wept as he viewed the horrible scene as she was burned at the stake. It is possible that Cardinal Beaufort was working behind the scenes to engineer the verdict. He was intimately tied to the royal family, thus it was very much in his family's interest that Joan be discredited.

Beaufort continued to be active in English politics for years, fighting with the other powerful advisors to the king .[citation needed] He died on 11 April 1447[8] He suffered from delirium on his deathbed and, as he hallucinated, according to legend, he offered Death the whole treasury of England in return for living a while longer.

When Henry was Bishop of Lincoln, he supposedly had an affair with Alice FitzAlan (1378–1415), the daughter of Richard FitzAlan and Elizabeth de Bohun and the widow of John Charleton, 4th Baron Cherleton. There is no contemporary documentation to support this allegation, and the theory has been disputed by Brad Verity.[10]

"Henry fathered an illegitimate daughter, Jane Beaufort, in 1402, who some make Alice's daughter. Both Jane and her husband, Sir Edward Stradling, were named in Cardinal Beaufort's will. Their marriage about 1423 brought Sir Edward into the political orbit of his shrewd and assertive father-in-law, to whom he may have owed his appointment as chamberlain of South Wales in December 1423, a position he held until March 1437."[11]