Henry Louis Bouquet, generally known as Henry Bouquet[1] (1719 – 2 September 1765) was a prominent British Army officer in the French and Indian War and Pontiac's War. Bouquet is best known for his victory over a Native American force at the Battle of Bushy Run, lifting the siege of Fort Pitt during Pontiac's War.

Bouquet was born into a moderately wealthy family in Rolle, Swiss Confederacy, the oldest of seven brothers. The son of a Swiss roadhouse owner and his well-to-do wife, he entered military service at the age of 17.[1] Like many military officers of his day, Bouquet traveled between countries serving as a professional soldier. He began his military career in the army of the Dutch Republic and later was in the service of the Kingdom of Sardinia. In 1748, he was again in Dutch service as lieutenant colonel of the Swiss guards.

He entered the British Army in 1754 as a lieutenant colonel in the 60th Regiment of Foot (The Royal American Regiment),[1] a unit made up largely of members of Pennsylvania's German immigrant community. After leading the Royal Americans to Charleston, South Carolina to bolster that city's defences, the regiment was recalled to Philadelphia to take part in General John Forbes' expedition against Fort Duquesne in 1758.

While Bouquet travelled down the road from Fort Bedford, his troops were attacked by French and Indians at Loyalhanna, near present Ligonier, Pennsylvania, but the attack was repulsed and they continued on to Fort Duquesne, only to find it razed by the fleeing French.[2]

Bouquet ordered the construction of a new British garrison on the site of Fort Duquesne. Bouquet is given credit for naming the new garrison Fort Pitt and the village that quickly grew up around it Pittsburgh. 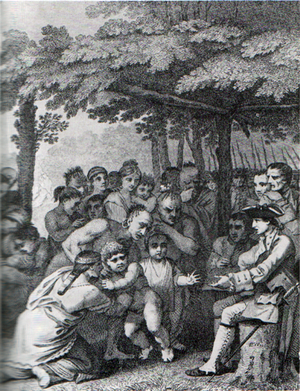 In 1763, bands of Native Americans joined forces to remove the British from their territory in what is most often called Pontiac's War. Pontiac, an Ottawa war leader, began urging the Indian tribes that had been allied to the French during the French and Indian War to join together to continue the fight to remove the British from the territory. Pontiac initiated attacks on the western-most frontier forts and settlements, believing the defeated French would rally and come to their aid. The start of the conflict is usually described as the siege of Fort Detroit on 10 May 1763. Fort Sandusky, Fort Michilimackinac, Fort Presque Isle, and numerous other frontier outposts were quickly overrun.

Several frontier forts in the Ohio Country had fallen to the allied tribes, and Fort Pitt, Fort Ligionier, and Fort Bedford along Forbes's road were besieged or threatened. Bouquet, who was in Philadelphia, threw together a hastily organised force of 500 men, mostly Scots Highlanders, to relieve the forts. On 5 August 1763, Bouquet and the relief column were attacked by warriors from the Delaware, Mingo, Shawnee, and Wyandot tribes near a small outpost called Bushy Run, in what is now Westmoreland County, Pennsylvania. In a two-day battle, Bouquet defeated the tribes and Fort Pitt was relieved. The battle marked a turning point in the war.

It was during Pontiac's War that Bouquet gained a certain lasting infamy. In a series of letters during the summer of 1763 between Bouquet and his commander, General Jeffery Amherst, the idea was proposed and agreed upon to infect the Indians near Fort Pitt with smallpox by giving them infected blankets from the fort's smallpox hospital. Amherst wrote to Bouquet, then in Lancaster, on about 29 June 1763: "Could it not be contrived to send the small pox among those disaffected tribes of Indians? We must on this occasion use every stratagem in our power to reduce them."[3] Bouquet agreed, replying to Amherst on 13 July: "I will try to inoculate the Indians by means of blankets that may fall in their hands, taking care however not to get the disease myself."[4] Amherst responded on 16 July: "You will do well to try to inoculate the Indians by means of blankets, as well as to try every other method that can serve to extirpate this execrable race."[5]

The journal of William Trent, the commander of the militia at the fort, has provided additional evidence that this plan was carried out, though it appears that the plan had already been carried out before Amherst had proposed it to Bouquet.:

[June] 24th [1763] The Turtles Heart a principal Warrior of the Delawares and Mamaltee a Chief came within a small distance of the Fort Mr. McKee went out to them and they made a Speech letting us know that all our [POSTS] as Ligonier was destroyed, that great numbers of Indians [were coming and] that out of regard to us, they had prevailed on 6 Nations [not to] attack us but give us time to go down the Country and they desired we would set of immediately. The Commanding Officer thanked them, let them know that we had everything we wanted, that we could defend it against all the Indians in the Woods, that we had three large Armys marching to Chastise those Indians that had struck us, told them to take care of their Women and Children, but not to tell any other Natives, they said they would go and speak to their Chiefs and come and tell us what they said, they returned and said they would hold fast of the Chain of friendship. Out of our regard to them we gave them two Blankets and an Handkerchief out of the Small Pox Hospital. I hope it will have the desired effect. They then told us that Ligonier had been attacked, but that the Enemy were beat of.[6]

It is unknown if Amherst and Bouquet had knowledge of Captain Ecuyer, McKee and Trent's actions when they were discussing the idea or if they had been given orders to carry out the plan from Bouquet, Amherst, or someone else or if they came up with the same plan on their own. What is known is that an outbreak of smallpox did occur among the Indians of the area. Since the smallpox incident at Fort Pitt, it is estimated that 400,000-500,000 (possibly up to 1.5 million) Native Americans - men, women, and children - died during and years after the Pontiac's War, mostly from smallpox given by the British and some in the outside infected areas than in combat. The incident at Fort Pitt was one of the known case of deliberate biological warfare in North America.[7][8][9][not in citation given]

By the autumn of 1764, Bouquet had become the commander of Fort Pitt. To subdue the ongoing Indian uprising, he led a force of nearly 1,500 militiamen and regular British soldiers from the fort into the Ohio Country.[10] On 13 October 1764, Bouquet's army reached the Tuscarawas River. Shortly thereafter, representatives from the Shawnees, Senecas, and Delawares came to Bouquet to sue for peace.[citation needed]

Bouquet then moved his army from the Tuscarawas River to the Muskingum River at modern-day Coshocton, Ohio. This placed him in the heart of tribal lands and would allow him to quickly strike the natives' villages if they refused to cooperate. As part of the peace treaty, Bouquet demanded the return of all white captives in exchange for a promise not to destroy the Indian villages or seize any of their land. The return of the captives caused much bitterness among the tribesmen, because many of them had been forcibly adopted into Indian families as small children, and living among the Native Americans had been the only life they remembered. Some 'white Indians' such as Rhoda Boyd managed to escape back into the native villages; many others were never exchanged. Bouquet was responsible for the return more than 200 white captives to the settlements back east.[citation needed]

In 1765, Bouquet was promoted to brigadier general and placed in command of all British forces in the southern colonies. He died in Pensacola, West Florida, on 2 September 1765, probably from yellow fever.

Bouquet is referred to in Conrad Richter's 1953 novel The Light in the Forest, which tells the story of one young man returned to his white family as part of the 1764 treaty. The Colonel is also referred to in Paul Muldoon's poem, "Meeting the British".