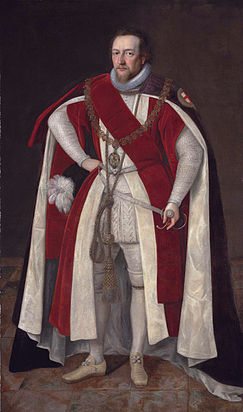 The son of William Brooke, 10th Baron Cobham, he was educated at King's College, Cambridge.[1] In 1597 he succeeded his father as Lord Warden of the Cinque Ports under Queen Elizabeth. Shortly after the accession of James I, he was implicated in the 'treason of the main' in 1603. His brother George was executed, and Henry was imprisoned in the Tower of London by James I, probably in an attempt to obtain the Cobham estates for the Duke of Lennox.

He may have been the subject of a number of Elizabethan satires such as Thomas Nashe's Lenten Stuffe, Ben Jonson's Every Man in his Humour, and may have been the model of Shakespeare's Falstaff, who was originally given the name 'Oldcastle'. Sir John Oldcastle was an ancestor of Lord Cobham. Though Falstaff is more likely modeled on his father William Brooke, 10th Baron Cobham (also descended from John Oldcastle) who was married to Frances Newton, whose family name was originally Caradock; referenced in 2 Henry IV when Falstaff sings "The Boy and the Mantle," a ballad in which Sir Caradoc's wife comes away with her fidelity and reputation intact (McKeen 1981). This could point to William Brooke, being married to a Caradock such as the Sir Cacadoc in the ballad sung by Falstaff, as the model for Falstaff rather than Henry, being the son of a Caradock.

Cobham and the Main Plot

Contemporary accounts portray Cobham as a good natured but unintelligent man. He opposed the ascension of James I to the throne, along with Thomas Grey, 15th Baron Grey de Wilton. Cobham's dislike of James may have arisen from quarrels over religious policy, but Lord Grey was anti-Catholic. Cobham shows little political activity prior to James's time, and he seems generally to have been an uninvolved peer. His brother, Sir George Brooke, on the other hand, was involved in radical religious politics.

In 1603, the first year of James I's rule, both Brookes were involved in plots against the king. George Brooke entered into the radical and absurd Bye Plot with two Catholic priests, William Watson and William Clark, to kidnap the king and privy council, and force them to ease the political persecution of English Catholics.

At the very same time, Grey and Cobham entered into the Main Plot to raise a regiment of soldiers and force a coup d'etat. Cobham and Grey were to raise one-hundred and sixty thousand pounds (a figure that could be safely multiplied by twenty to convert to contemporary money) to bribe or hire an army. Cobham was to be the go-between with the Count of Aremberg, who would do the actual negotiations with the Spanish court for the money. The conspirators, upon seizing government, would depose James and put Lady Arabella Stuart on the throne in his stead.

It is very likely that none of the offers from Aremberg were in good faith, and it is exceptionally unlikely that the Spanish court, already deeply indebted to banks in Belgium and Netherlands and having lost its armada and many of its galleons to English pirates, was in any position to offer such an astronomical sum to an unlikely intrigue. However, Cobham believed the offers. He spoke with Sir Walter Raleigh about contacting Aremberg, and he was readying to set forth.

Cobham, aged and sick, was released from the Tower in 1618, and died a year later in a "dingy apartment in the Minories."[2]