Henry Cabot Lodge, Jr. (July 5, 1902 – February 27, 1985), sometimes referred to as Henry Cabot Lodge II,[1] was a Republican United States Senator from Massachusetts and a U.S. ambassador to the United Nations, South Vietnam, West Germany, and the Holy See (as Representative). He was the Republican nominee for Vice President in the 1960 Presidential election.

Lodge worked in the newspaper business before being elected to the Massachusetts House of Representatives, where he served from 1933 to 1936.[citation needed]

In November 1936, Lodge was elected to the United States Senate as a Republican, defeating Democrat James Michael Curley. He served from January 1937 to February 1944.

Lodge served with distinction during the war, rising to the rank of lieutenant colonel. During the war he saw two tours of duty. The first was in 1942 while he was also serving as a U.S. Senator. The second was in 1944–5 after he resigned from the Senate.[citation needed]

The first period was a continuation of Lodge's longtime service as an Army Reserve Officer. Lodge was a major in the 1st Armored Division. That tour ended in July 1942, when President Franklin D. Roosevelt ordered congressmen serving in the military to resign one of the two positions, and Lodge, who chose to remain in the Senate, was ordered by Secretary of War Henry Stimson to return to Washington.[5]

After returning to Washington and winning re-election in November 1942, Lodge went to observe allied troops serving in Egypt and Libya,[6] and in that position, he was on hand for the British retreat from Tobruk.[5]

Lodge served the first year of his new Senate term but then resigned his Senate seat on February 3, 1944 in order to return to active duty,[7] the first U.S. Senator to do so since the Civil War[8] He saw action in Italy and France.

In the fall of 1944, Lodge single-handedly captured a four-man German patrol.[9]

At the end of the war, in 1945, he used his knowledge of the French language and culture, gained from attending school in Paris to aid Jacob L. Devers, the commander of the Sixth United States Army Group, to coordinate activities with the Army Group's First Army commander, Jean de Lattre de Tassigny, and then carry out surrender negotiations with German forces in western Austria.[citation needed]

Lodge was decorated with the French Legion of Honor and Croix de Guerre with palm.[10] His American decorations included the Legion of Merit and the Bronze Star Medal.

After the war, Lodge returned to Massachusetts and resumed his political career. He continued his status as an Army Reserve officer and rose to the rank of major general.[citation needed]

Return to Senate and the drafting of Eisenhower

In 1946 Lodge defeated Democratic Senator David I. Walsh and returned to the Senate. He soon emerged as a spokesman for the moderate, internationalist wing of the Republican Party. In late 1951, Lodge helped persuade General Dwight D. Eisenhower to run for the Republican presidential nomination. When Eisenhower finally consented, Lodge served as his campaign manager and played a key role in helping Eisenhower to win the nomination over Senator Robert A. Taft of Ohio, the candidate of the party's conservative faction.[citation needed]

In March 1950, Lodge sat on the GOP subcommittee of the Tydings panel, chaired by high ranking Democratic Senator Millard Tydings that looked into Senator Joseph McCarthy's list of possibly disloyal State Department employees, some of whom may have pledged allegiance to Stalin. Lodge opposed both Tydings's demonization of McCarthy as well as his whitewashing of the security leaks at the State Department from its incompetent screening of employees.

Stunned by the vicious badgering of McCarthy from the outset, Lodge said to Tydings, "Mr Chairman, this is the most unusual procedure I have seen in all the years I have been here. Why cannot the senator from Wisconsin get the normal treatment and be allowed to make his statement in his own way,... and not be pulled to pieces before he has had a chance to offer one single consecutive sentence.... I do not understand what kind of game is being played here."[11]

In July 1950, the report printed out, and Henry Cabot Lodge was outraged once again to see that 35 pages had been surgically removed.[12] All records of his objections to the hearing and of his misgivings about the inadequacy of vetting suspected traitors by their say so alone were gone.[13] The edited version read as if all committee members agreed that there was no Communist infiltration of the State department and that McCarthy himself was the evildoer.[14] About the erversion of truth the Congressional Record from July 24 indicates Senator Lodge said, "I shall not attempt to characterize these methods of leaving out of the printed text parts of the testimony and proceedings... because I think they speak for themselves." Lodge would soon fall out with McCarthy and join forces with President Eisenhower to oust the beleaguered senator from Wisconsin, who had not campaigned for Cabot in Massachusetts as he was asked, thus allowing the upstart son of Senator Joseph Kennedy, himself a friend and supporter of McCarthy, a kindred Irish Catholic self-made man, to take Lodge's seat in senate.[15]

In the fall of 1952, Lodge found himself fighting in a tight race for re-election with John F. Kennedy, then a US Representative from Massachusetts. His efforts in helping Eisenhower made Lodge neglect his own Senate campaign. In addition, some of Taft's supporters in Massachusetts were angered when Lodge supported Eisenhower and defected to Kennedy's campaign.[16] In November 1952 Lodge was defeated by Kennedy, Lodge received 48.5% of the vote to Kennedy's 51.5%. It was neither the first nor the last time a Lodge faced a Kennedy in a Massachusetts election: in 1916 Henry Cabot Lodge had defeated Kennedy's grandfather John F. Fitzgerald for the same Senate seat, and Lodge's son, George, was defeated in his bid for the seat by Kennedy's brother Ted in the 1962 election for John F. Kennedy's unexpired term.[citation needed]

Lodge was named U.S. ambassador to the United Nations by President Eisenhower in February 1953, with his office elevated to Cabinet-level rank. In contrast to his grandfather (who had been a principal opponent of the UN's predecessor, the League of Nations), Lodge was supportive of the UN as an institution for promoting peace. As he famously said about it, "This organization is created to prevent you from going to hell. It isn't created to take you to heaven."[17] Since then, no one has even approached his record of seven years as ambassador to the UN. During his time as UN Ambassador, Lodge supported the Cold War policies of the Eisenhower Administration, and often engaged in debates with the UN representatives of the Soviet Union.

During the CIA-sponsored overthrowing of the legitimate Guatemalan government, when Britain and France became concerned about the US being involved in the aggression, Lodge (as US Ambassador to the United Nations) threatened to withdraw US support to Britain on Egypt and Cyprus and France on Tunisia and Morocco unless they backed the US in their action.[18] When the government was overthrown, The United Fruit Company re-established itself in Guatemala. The episodes tainted an otherwise distinguished career and painted Lodge as a face of US imperialism and exceptionalism.[citation needed]

In 1959, he escorted Soviet leader Nikita Khrushchev on a highly publicized tour of the United States.

Lodge left the ambassadorship during the election of 1960 to run for Vice President on the Republican ticket headed by Richard Nixon, against Lodge's old foe, John F. Kennedy. Before choosing Lodge, Nixon had also considered Philip Willkie of Indiana, son of Wendell L. Willkie; U.S. Representative Gerald Ford of Michigan; and U.S. Senator Thruston B. Morton of Kentucky. Nixon finally settled on Lodge in the mistaken hope that Lodge's presence on the ticket would force Kennedy to divert time and resources to securing his Massachusetts base, but Kennedy won his home state handily. Nixon also felt that the name Lodge had made for himself in the United Nations as a foreign policy expert would prove useful against the relatively inexperienced Kennedy. Nixon and Lodge lost the election in a razor-thin vote.

The choice of Lodge proved to be questionable. Not only he could not carry his home state for Nixon but also some conservative Republicans charged that Lodge had cost the ticket votes, particularly in the South, by his pledge (made without Nixon's approval) that if elected, Nixon would name at least one African American to a Cabinet post. He suggested Ralph Bunche as a "wonderful idea".[19] 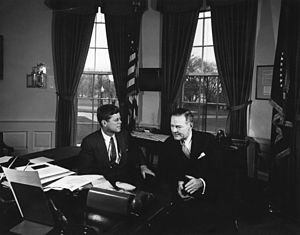 Between 1961 and 1962, Lodge was the first director-general of the Atlantic Institute.[20]

Kennedy appointed Lodge to the position of Ambassador to South Vietnam, which he held from 1963 to 1964. The new ambassador quickly determined that Ngo Dinh Diem, President of the Republic of Vietnam, was both inept and corrupt and that South Vietnam was headed for disaster unless Diem reformed his administration or was replaced.[21] While the coup toppled the Diem government, it sparked a rapid succession of leaders in Vietnam, each unable to rally and unify their people and in turn overthrown by someone new. Removal of Diem caused more political instability in the South, since no strong, centralized and permanent government was in place to govern the nation, not to mention an increase in Viet Minh infiltration into the Southern populace and more attacks in the South. After supporting the coup of President Diem, Lodge then realized that the situation in the region deteriorated, and he suggested to the State Department that South Vietnam should be made to relinquish its independence and become a protectorate of the United States (like the former status of the Philippines) so as to bring governmental stability. The alternatives, he warned, were either increased military involvement by the U.S. or total abandonment of South Vietnam by America.[22] 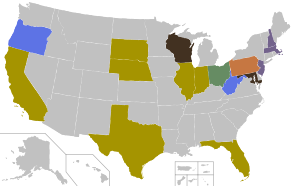 In 1964, Lodge, while still Ambassador to South Vietnam, was the surprise write-in victor in the Republican New Hampshire primary, defeating declared presidential candidates Barry Goldwater and Nelson Rockefeller.[23] His entire campaign was organized by a small band of political amateurs working independently of the ambassador, who, believing they had little hope of winning him any delegates, did nothing to aid their efforts. However, when they scored the New Hampshire upset, Lodge, along with the press and Republican party leaders, suddenly began to seriously consider his candidacy. Many observers remarked on the situation's similarity to 1952, when Eisenhower had unexpectedly defeated Senator Robert A. Taft, then leader of the Republican Party's conservative faction. However, Lodge (who refused to become an open candidate) did not fare as well in later primaries, and Goldwater ultimately won the presidential nomination.[citation needed]

He was re-appointed ambassador to South Vietnam by President Lyndon B. Johnson in 1965, and served thereafter as Ambassador at Large (1967–1968) and Ambassador to West Germany (1968–1969). In 1969, when his former running mate Richard M. Nixon finally became President, he was appointed by President Nixon to serve as head of the American delegation at the Paris peace negotiations, and he served occasionally as personal representative of the President to the Holy See from 1970 to 1977.[24] 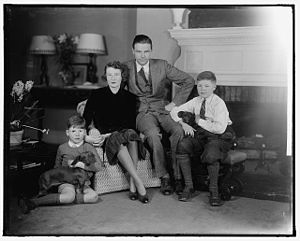 In 1926, Lodge married Emily Esther Sears. They had two children: George Cabot Lodge II (b. 1927) and Henry Sears Lodge (b. 1930).[25] George was in the federal civil service and is now a well-published professor emeritus at Harvard Business School. Henry married Elenita Ziegler of New York City and is a former sales executive.[26]

In 1966 he was elected an honorary member of the Massachusetts Society of the Cincinnati.[27]

Lodge died in 1985 after a long-illness and was interred in the Mount Auburn Cemetery in Cambridge, Massachusetts.[28] Two years after his death, Sears remarried Forrester A. Clark. She died in 1992 of lung cancer and is interred near her first husband in the Cabot Lodge family columbarium.[29]