Henry Chaplin, 1st Viscount Chaplin PC (22 December 1840 – 29 May 1923) was a British landowner, racehorse owner and Conservative Party politician who sat in the House of Commons from 1868 until 1916 when he was raised to the peerage.

The member of an old Lincolnshire family, Chaplin was born at Ryhall, Rutland, the second son of the Reverend Henry Chaplin, of Blankney, Lincolnshire and his wife Carolina Horatia Ellice, daughter of William Ellice. His younger brother Edward Chaplin was also a politician. Chaplin was educated at Harrow and Christ Church, Oxford, where he was a friend of the Prince of Wales. At the age of 21, he inherited substantial estates in Lincolnshire (including the family seat of Blankney Hall), Nottinghamshire and Yorkshire. He was a Justice of the Peace and a Deputy Lieutenant of Lincolnshire, and a leading member of the Turf.[1][2]

In 1864 Chaplin fell in love with and became engaged to Lady Florence, daughter of Henry Paget, 2nd Marquess of Anglesey and a celebrated beauty. The wedding was to be the society event of the year with the Prince of Wales one of many to offer his congratulations. However, during their engagement Florence had secretly fallen in love with Henry Rawdon-Hastings, 4th Marquess of Hastings. Just before her wedding, she had Chaplin take her to Marshall & Snelgrove's on Oxford Street to add to her wedding outfit. While Chaplin waited in the carriage outside, Florence walked straight through the shop and out to the other side, where Hastings waited for her in a carriage. Hastings and Florence were married on the same day.[3] After the wedding, a reception was held in St James' Place before the newly married couple set off for their honeymoon at Donington Hall, Leicestershire whilst the scandal died down. Florence Paget informed Chaplin by letter the next day.[4]

In the 1867 Derby, Chaplin renewed his rivalry with Lord Hastings. Hastings wagered thousands of pounds against Chaplin's horse, Hermit.[5] Ten days before the race Hermit was injured and Chaplin was advised not to enter him. However, the injury was not as serious as first thought, and though not fully fit, Hermit entered the race and won it. Lord Hastings lost heavily and fell into severe debts. Adding to a drinking problem, Chaplin's great rival died in poverty the following year, aged 26.[6] 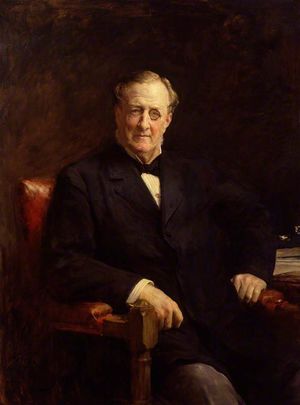 Chaplin first entered parliament at the 1868 general election as Member of Parliament (MP) for Mid-Lincolnshire.[7] He represented this constituency until it was replaced under the Redistribution of Seats Act 1885.[8] In the 1885 general election he was returned to parliament for the new Sleaford division[9] which he held until his defeat at the 1906 general election.[9][10]

Chaplin was sworn of the Privy Council in 1885 and filled the office of Chancellor of the Duchy of Lancaster in Lord Salisbury's short ministry of 1885 to 1886. He became the first President of the Board of Agriculture in 1889, with a seat in the cabinet, and retained this post till 1892. In the Conservative cabinet of 1895 to 1900 he was President of the Local Government Board, and was responsible for the Agricultural Rates Act 1896. However, he was not included in the ministry after its reconstruction in 1900.

Chaplin had always been an advocate of protectionism, being in this respect the most prominent inheritor of the views of Lord George Bentinck; and when in 1903 the tariff reform movement began under Chamberlain's leadership, he gave it his enthusiastic support, becoming a member of the Tariff Commission and one of the most strenuous advocates in the country of the new doctrines in opposition to free trade.

After losing his seat at Sleaford in 1906, Chaplin was returned to the House of Commons at a by-election in May 1907 as member for Wimbledon.[11] He held the seat until 1916,[12] when he was raised to the peerage as Viscount Chaplin, of Saint Oswald's, Blankney, in the County of Lincoln. 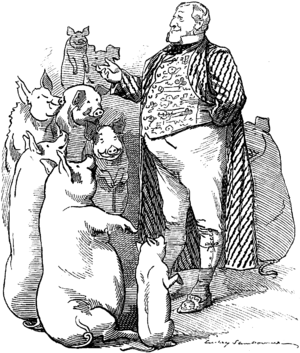 Henry Chaplin in a Punch cartoon accompanying a satirical article on his receiving a deputation on the subject of the swine fever.[13]

Known as the "Squire of Blankney", Chaplin took an active interest in agricultural questions, as a popular and typical representative of the English "country gentleman" class. However, mounting debts forced him to sell the family seat of Blankney Hall to Lord Londesborough in 1887.

In 1876 Chaplin married Lady Florence, daughter of George Sutherland-Leveson-Gower, 3rd Duke of Sutherland. They had one son, Eric, and two daughters, Edith and Florence. Lady Florence died in childbirth in 1881, giving birth to her youngest daughter, Florence. Lord Chaplin remained a widower until his death in May 1923, aged 82. He was succeeded in the viscountcy by his son, Eric.