Henry Clay Frick (December 19, 1849 – December 2, 1919) was an American industrialist, financier, union-buster, and art patron. He founded the H. C. Frick & Company coke manufacturing company, was chairman of the Carnegie Steel Company, and played a major role in the formation of the giant U.S. Steel steel manufacturing concern. He also financed the construction of the Pennsylvania Railroad and the Reading Company,[citation needed] and owned extensive real estate holdings in Pittsburgh and throughout the state of Pennsylvania. He later built the historic neoclassical Frick Mansion (now a landmark building in Manhattan) and at his death donated his extensive collection of old master paintings and fine furniture to create the celebrated Frick Collection and art museum.

Frick was born in West Overton, Westmoreland County, Pennsylvania, in the United States, a grandson of Abraham Overholt, the owner of the prosperous Overholt Whiskey distillery (see Old Overholt).[1] Frick's father, John W. Frick, was unsuccessful in business pursuits. Henry Clay Frick attended Otterbein College for one year, but did not graduate.[2] In 1871, at 21 years old, Frick joined two cousins and a friend in a small partnership, using a beehive oven to turn coal into coke for use in steel manufacturing, and vowed to be a millionaire by the age of thirty. The company was called Frick Coke Company.[3]

Thanks to loans from the family of lifelong friend Andrew W. Mellon, by 1880, Frick bought out the partnership. The company was renamed H. C. Frick & Company, employed 1,000 workers and controlled 80 percent of the coal output in Pennsylvania,[3] operating coal mines in Westmoreland and Fayette counties, where he also operated banks of beehive coke ovens. Some of the brick and stone structures are still visible in both Fayette and Westmoreland Counties.

Shortly after marrying Adelaide Howard Childs,[4] in 1881, Frick met Andrew Carnegie in New York City while the Fricks were on their honeymoon. This introduction would lead to an eventual partnership between H. C. Frick & Company and Carnegie Steel Company, and was the predecessor to United States Steel. This partnership ensured that Carnegie's steel mills had adequate supplies of coke. Frick became chairman of the company. Carnegie made multiple attempts to force Frick out of the company they had created by making it appear that the company had nowhere left to go and that it was time for Frick to retire. Despite the contributions Frick had made towards Andrew Carnegie's fortune, Carnegie disregarded him in many executive decisions including finances.[5]

The sixty-odd club members were the leading business tycoons of Western Pennsylvania, and included among their number Frick’s best friend, Andrew Mellon, his attorneys Philander Knox and James Hay Reed, as well as Frick's occasional business partner Andrew Carnegie. The club members made inadequate repairs to what was at that time the world's largest earthen dam, behind which formed a private lake called Lake Conemaugh. Less than 20 miles (32 km) downstream from the dam sat the city of Johnstown. Cambria Iron Company operated a large iron and steel work in Johnstown and its owner, Daniel J. Morrell, was concerned about the safety of the dam and the thoroughness of repairs made to it. Morrell had even sent his own engineer to inspect the site but little was done in the long run to satisfy his concerns and the matter was largely dropped after Morrell's death in the mid-1880s.[citation needed]

Poor maintenance, unusually high snowmelt and heavy spring rains combined to cause the dam to give way on May 31, 1889, resulting in the Johnstown Flood. When word of the dam's failure was telegraphed to Pittsburgh, Frick and other members of the club gathered to form the Pittsburgh Relief Committee for assistance to the flood victims, as well as determining never to speak publicly about the club or the flood. This strategy was a success, and Knox and Reed were able to fend off all lawsuits that would have placed blame upon the club’s members. Although Cambria Iron's facilities were heavily damaged, they returned to full production within a year and a half.[citation needed]

Frick and Carnegie's partnership was strained over actions taken in response to the Homestead Steel Strike, an 1892 labor strike at the Homestead Works of the Carnegie Steel Company, called by the Amalgamated Association of Iron and Steel Workers.[3] At Homestead, striking workers, some of whom were armed, had locked the company staff out of the factory and surrounded it with pickets. Frick was known for his anti-union policy and as negotiations were still taking place, he ordered the construction of a solid board fence topped with barbed wire around mill property. The workers dubbed the newly fortified mill "Fort Frick." With the mill ringed by striking workers, Pinkerton agents planned to access the plant grounds from the river. Three hundred Pinkerton detectives[3] assembled on the Davis Island Dam on the Ohio River about five miles (8 km) below Pittsburgh at 10:30 p.m. on the night of July 5, 1892. They were given Winchester rifles, placed on two specially-equipped barges and towed upriver with the object of removing the workers by force. Upon their landing, a large mêlée between workers and Pinkerton detectives ensued. Ten men were killed, nine of them workers, and there were seventy injuries.[3][6] The Pinkerton agents were thrown back, and the riot was ultimately quelled only by the intervention of 8,000 armed state militia under the command of Major General George R. Snowden.[6] During the confrontation Frick issued an ultimatum to Homestead workers, which restated his refusal to speak with union representatives and threatened to have striking workers evicted from their homes.[6]

Among working-class Americans, Frick's actions against the strikers were condemned as excessive, and he soon became a target of even more union organizers. Because of this strike, some [7] had thought that he is depicted as the "rich man" in Maxo Vanka's murals in St. Nicholas Croatian Church, but the Society to Preserve the Millvale Murals of Maxo Vanka (which works to preserve the artwork) says it depicts Andrew Mellon.[8] 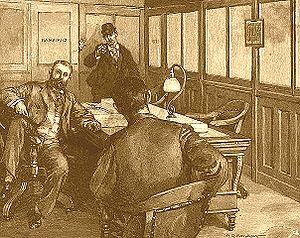 Frick, realizing what was happening, attempted to rise from his chair while Berkman pulled a revolver and fired at nearly point-blank range. The bullet hit Frick in the left earlobe, penetrated his neck near the base of the skull, and lodged in his back. The impact knocked Frick down, and Berkman fired again, striking Frick for a second time in the neck and causing him to bleed extensively. Carnegie Steel vice president (later, president) John George Alexander Leishman, who was with Frick, was then able to grab Berkman’s arm and prevented a third shot, probably saving Frick's life.[citation needed]

Frick was seriously wounded, but rose and (with the assistance of Leishman) tackled his assailant.[9] All three men crashed to the floor, where Berkman managed to stab Frick four times in the leg with the pointed steel file before finally being subdued by other employees, who had rushed into the office.[citation needed]

Frick was back at work in a week; Berkman was charged and found guilty of attempted murder. Berkman's actions in planning the assassination clearly indicated a premeditated intent to kill, and he was sentenced to 22 years in prison.[3] Negative publicity from the attempted assassination resulted in the collapse of the strike.[10] Approximately 2,500 men lost their jobs, and most of the workers who stayed had their wages halved.[11] 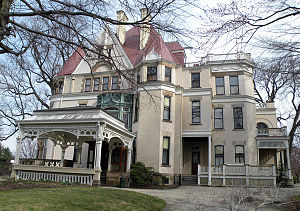 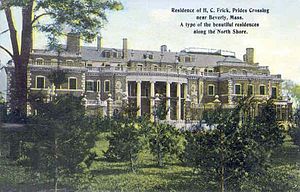 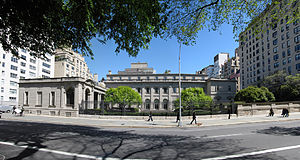 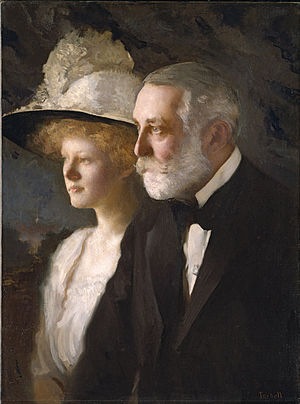 Frick married Adelaide Howard Childs of Pittsburgh on December 15, 1881. They had four children: Childs Frick (born March 12, 1883), Martha Howard Frick (born August 9, 1885), Helen Clay Frick (born September 3, 1888) and Henry Clay Frick, Jr. (born July 8, 1892). In 1882, after the formation of the partnership with Andrew Carnegie, Frick and his wife bought a home they eventually called Clayton, an estate in Pittsburgh's East End. They moved into the home in early 1883. The Frick children were born in Pittsburgh and were raised at Clayton. Two of them, Henry, Jr. and Martha, died in infancy or childhood.[12]

In 1904, he built Eagle Rock, a summer estate at Prides Crossing in Beverly, Massachusetts on Boston's fashionable North Shore. The 104-room mansion designed by Little & Browne would be razed in 1969.[13]

Frick was a fervent art collector whose wealth allowed him to accumulate a large collection. By 1905, Henry Clay Frick's business, social, and artistic interests had shifted from Pittsburgh to New York. He took his art collection with him to New York, and served on many corporate boards, which brought him considerable opportunity to continue his lifelong business interests.[citation needed]

For example, as a board member of the Equitable Life Insurance Company, Frick attempted the removal of James Hazen Hyde (the founder's only son and heir) from the United States to France by seeking an appointment for him to become United States Ambassador to France. Frick had engaged a similar stratagem when orchestrating the ouster of the man who had saved his life, John George Alexander Leishman, from the presidency of Carnegie Steel a decade beforehand. In that instance, Leishman had chosen to accept the post as ambassador to Switzerland. Hyde, however, rebuffed Frick's plan. He did, however, move to France, where he served as an ambulance driver during World War I and lived until the outbreak of World War II. (Coincidentally, while in France, Hyde married Leishman's eldest daughter Marthe.)[citation needed]

The Frick Collection is home to one of the finest collections of European paintings in the United States. It contains many works of art dating from the pre-Renaissance up to the post-Impressionist eras, but in no logical or chronological order. It includes several very large paintings by J. M. W. Turner and John Constable. In addition to paintings, it also contains an exhibition of carpets, porcelain, sculptures, and period furniture. Frick continued to live at both his New York mansion and at Clayton until his death.[citation needed]

Frick and his wife Adelaide had booked tickets to travel back to New York on the inaugural trip of the RMS Titanic in 1912, along with J.P. Morgan. The couple canceled their trip after Adelaide sprained her ankle in Italy and missed the disastrous voyage.[14]

Henry Clay Frick died of a heart attack on December 2, 1919, weeks before his 70th birthday.[15] He was buried in Pittsburgh's Homewood Cemetery.[citation needed]

Frick left a will in which he bequeathed 150 acres (0.61 km2) of undeveloped land to the City of Pittsburgh for use as a public park, together with a $2 million trust fund to assist with the maintenance of the park. Frick Park opened in 1927. Between 1919 and 1942, money from the trust fund was used to enlarge the park, increasing its size to almost 600 acres (2.4 km2). Following the death of Adelaide Howard Childs Frick in 1931, the Frick Collection was opened to the public as a museum in 1935.[citation needed]

Many years after her father's death, Helen Clay Frick returned to Clayton in 1981, and lived there until her death in 1984. After extensive restoration, this property was also opened to the public in 1990 as the Frick Art & Historical Center.[citation needed]

Frick was elected an honorary member of the Alpha Chapter of Phi Mu Alpha Sinfonia music fraternity at the New England Conservatory of Music on October 19, 1917.[citation needed]