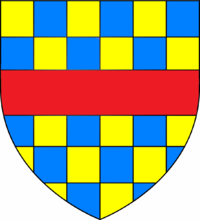 Arms of Clifford: Chequy or and azure, a fess gules 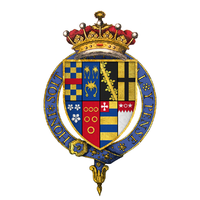 He was born at Skipton Castle, a son of Henry Clifford, 10th Baron de Clifford by his wife Anne St John, daughter of Sir John St John of Bletso by his first wife Alice Bradshaigh.[1][2]

As a youth Clifford spent time at the court of King Henry VIII and was knighted at Henry's coronation in 1509. he was appointed Sheriff of Yorkshire in 1522 and became hereditary Sheriff of Westmorland on the death of his father in 1523. As part of King Henry VIII's plans for the defence of the Scottish border he was created Earl of Cumberland on 18 June 1525, made Warden of the West Marches and Governor of Carlisle Castle. He was however soon replaced by William Dacre, 3rd Baron Dacre but after the latter was accused of treason, he was reinstated in the post from 1534 to 1542. In 1536 he refused to support the Pilgrimage of Grace and as a result was besieged in Skipton Castle. He was made a Knight of the Garter by a grateful King Henry VIII in 1537.

He died in 1542 and was buried in Skipton church, where his monument survives.