He was the son of Edward Clinton, 1st Earl of Lincoln, by second wife Ursula Stourton. He was made a Knight of the Bath in 1553. He was returned to the House of Commons, representing the constituency of Lincolnshire in 1571. He was commissioned a captain of horse in the Royal army in 1569. 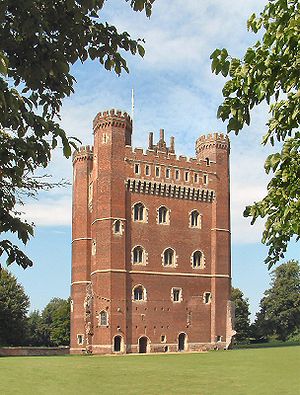 He inherited the earldom and barony from his father Edward in 1585. By his father's will, which Henry contested, he inherited Tattershall Castle; but his wife Elizabeth had a life interest in the family property at Sempringham.[2] Subsequently Clinton feuded with the poet Tailboys Dymoke, son of his brother-in-law Robert Dymoke, over some obnoxious verses.[3]

He died at Sempringham, and was succeeded by his son Thomas Clinton, 3rd Earl of Lincoln.

He married firstly in 1555 or 1557 Lady Catherine Hastings (born 11 August 1542), a daughter of Francis Hastings, 2nd Earl of Huntingdon, and Catherine Pole, and had: