Compton was born the sixth and youngest son of the 2nd Earl of Northampton. He was educated at The Queen's College, Oxford, but left in 1654 without a degree, and then travelled in Europe.[1] After the restoration of Charles II in 1660 he became a cornet in the Royal Regiment of Horse,[2] but soon quit the army for the church. After a further period of study at Cambridge and again at Oxford, he graduated as a D.D. in 1669. He held various livings, including rector of Cottenham, Cambridgeshire, and Witney, Oxfordshire.[1]

He was made Bishop of Oxford in 1674, and in the following year was translated to the see of London, and also appointed Dean of the Chapel Royal.[1] He was also appointed a member of the Privy Council, and entrusted with the education of the two princesses, Mary and Anne. He showed a liberality most unusual at the time to Protestant dissenters, whom he wished to reunite with the established church. He held several conferences on the subject with the clergy of his diocese; and in the hope of influencing candid minds by means of the opinions of unbiased foreigners, he obtained letters treating of the question (since printed at the end of Stillingfleet's Unreasonableness of Separation) from Le Moyne, professor of divinity at Leiden, and the famous French Protestant divine, Jean Claude.

In 1676 he was instructed by Lord Danby to conduct an ecclesiastical census of the population, which became known as the Compton Census.[3]

In contrast to his liberality about Protestant dissent, Compton was strongly opposed to Roman Catholicism. On the accession of James II in February 1685 he consequently lost his seat in the council and his position as Dean of the Chapel Royal; and for his firmness in refusing to suspend John Sharp, rector of St Giles's-in-the-Fields, whose anti-papal preaching had rendered him obnoxious to the king, he was himself suspended by James's Court of High Commission in mid-1686.[4] The suspension was lifted in September 1688, two days before the High Commission was abolished.[5]

At the Glorious Revolution Compton embraced the cause of William and Mary, being one of the Immortal Seven who invited William to invade England; he performed the ceremony of their coronation; his old position was restored to him; and among other appointments, he was chosen as one of the commissioners for revising the liturgy. During the reign of Anne he remained a member of the privy council, and was one of the commissioners appointed to arrange the terms of the union of England and Scotland; but, to his bitter disappointment, his claims to the primacy were twice passed over. He died at Fulham on 7 July 1713. He sent his second cousin, John Compton, to Maryland where Henry had been given a land grant, and from afar, Henry helped set up the Anglican Church in Maryland. 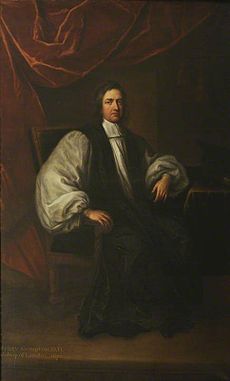 Compton was a successful botanist. He also published, besides several theological works, A Translation from the Italian of the Life of Donna Olympia Maladichini, who governed the Church during the time of Pope Innocent X, which was from the year 1644 to 1655 (1667), and A Translation from the French of the Jesuits' Intrigues (1669).