Sir Henry Thomas De la Beche[lower-alpha 1] KCB, FRS (10 February 1796 – 13 April 1855) was an English geologist and palaeontologist, the first director of the Geological Survey of Great Britain, who helped pioneer early geological survey methods. He was the first President of the Palaeontographical Society.

De la Beche[2] was born in London. His father, an officer in the British Army, was a slave owner with an estate in Jamaica, but died while his son was still young. De la Beche spent his early life living with his mother in Lyme Regis, where he acquired a love for geology through his friendship with Mary Anning. At the age of fourteen he entered the Royal Military College, then at Great Marlow.[3]

The peace of 1815, however, changed his career. At the age of twenty-one De la Beche joined the Geological Society of London.[3] He became an avid fossil collector and illustrator, collaborating with William Conybeare on an important paper on ichthyosaur and plesiosaur anatomy that was presented before the Society in 1821.[4][5] He continued throughout life to be one of its most active, useful and honoured members, serving as president of the Society from 1848 – 1849. He visited many localities of geological interest, not only in Britain, but also in France, Jamaica and Switzerland. In Jamaica he stayed on his estate, Halse Hall, Clarendon Parish, in 1823–1824[6] and published his geological account of Jamaica in 1827. Returning to the south-west of England he began the detailed investigation of the rocks of Cornwall and Devon. Contact with the mining community of that part of the country gave him the idea that the nation ought to compile a geological map of the United Kingdom, and collect and preserve specimens to illustrate, and aid in further developing, its mineral industries.[3]

The government then appointed De la Beche to work with the Ordnance Survey. This formed the starting point of the Geological Survey of Great Britain, which was officially recognised in 1835, when De la Beche was appointed as director.[7] As the first director of the Museum of Practical Geology in Jermyn Street, in 1843 he donated many of his own books to establish the library.[8]

Increasing stores of valuable specimens began to arrive in London; and the building at Craigs Court, where the young Museum of Economic Geology was placed, became too small. De la Beche appealed to the authorities to provide a larger structure and to widen the whole scope of the scientific establishment of which he was the head. Parliament sanctioned the erection of a museum in Jermyn Street, London, and the organisation of a staff of professors with laboratories and other appliances. The establishment, in which were combined the offices of the Geological Survey, the Museum of Practical Geology, The Royal School of Mines and the Mining Record Office, was opened in 1851.[3]

Conditions of scientific testing were rudimentary; as part of his colleague Lyon Playfair's investigations into "overflowing privies", Sir Henry De la Beche once took the role of test-vomiter, to judge sewage flow.[9]

In 1830, De la Beche published Sections and views, illustrative of geological phaenomena, a series of line drawings to encourage more accurate depictions of geological formations. He also published numerous memoirs on English geology in the Transactions of the Geological Society of London, as well as in the Memoirs of the Geological Survey, notably the Report on the Geology of Cornwall, Devon and West Somerset (1839). He likewise wrote A Geological Manual (1831; 3rd ed., 1833); and Researches in Theoretical Geology (1834), in which he enunciated a philosophical treatment of geological questions much in advance of his time. An early volume, How to Observe Geology (1835 and 1836), was rewritten and enlarged by him late in life, and published under the title of The Geological Observer (1851; 2nd ed., 1853). 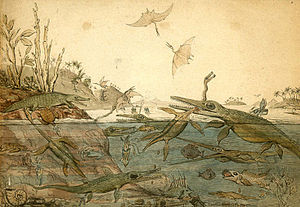 Duria Antiquior – A more Ancient Dorset is a watercolor painted in 1830 by Henry De la Beche, based on fossils found by Mary Anning

De la Beche was the principal antagonist of Roderick Murchison and Adam Sedgwick in what has been labelled The Great Devonian Controversy. He frequently used cartoons as a tactful way to express his frustrations on this and other issues.[3]

He was elected Fellow of the Royal Society in 1819. He was knighted in 1848 and, near the close of his life he was awarded the Wollaston medal.[3] In 1852, he was elected a foreign member of the Royal Swedish Academy of Sciences.

After his death, students at the Royal College of Mines and other institutions competed for the bursary of the De la Beche medal.[10] The medal was in fact the second imprint, of a medal De la Beche had originally had engraved and struck for the slaves he inherited from his father on the plantation in Jamaica on his return to Lyme Regis in 1825.[11] The second version of the medal, in silver and bronze, was engraved by William Wyon of the Royal Mint – with De la Beche's portrait on one side, and the plantation on the other – the plantation being replaced with crossed hammers for the School of Mines.

He is buried in the Kensal Green Cemetery, London. 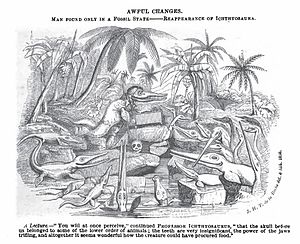 A great supporter of the work and importance of Mary Anning, of Lyme Regis, Henry De la Beche drew a sketch, in 1830, entitled Duria Antiquior – A More Ancient Dorset, which showed Mary Anning's finds: (three types of Ichthyosaur, a Plesiosaur and Dimorphodon). It even appears to show the production of coprolites, from a terrified plesiosaur. De la Beche assisted Anning, who was having financial difficulties, by having a lithographic print made from his watercolour and donating the proceeds from the sale of the prints to her. This became the first such scene from deep time to be widely circulated.[12]

He was a great and objective scientist and poked fun at some of the more outlandish theories of the time, such as that put forward by Charles Lyell, proposing that geological and biological history were cyclical and that ancient life forms would again walk the earth. His cartoon, also drawn in 1830, was entitled Awful Changes and depicted an ichthyosaur professor lecturing on a fossilised human skull: " 'You will at once perceive' continued Professor Ichthyosaurus, 'that the skull before us belonged to some of the lower order of animals; the teeth are very insignificant, the power of the jaws trifling, and altogether it seems wonderful how the creature could have procured food.' "