Henry Dundas, 1st Viscount Melville, Baron Dunira PC FRSE (28 April 1742, Arniston, Midlothian – 28 May 1811, Edinburgh) was a Scottish advocate and Tory politician. He was the first Secretary of State for War and became, in 1806, the last person to be impeached in the United Kingdom, for misappropriation of public money. Although acquitted, he never held public office again.[1]

Dundas was a key actor in the encouragement of the Scottish Enlightenment, in the prosecution of the war against France, in opposing the abolition of slavery, and in the expansion of British influence in India, dominating the affairs of the East India Company. An accomplished machine politician and scourge of the Radicals, his deft and almost total control of Scottish politics during a long period when no monarch visited the country, led to him being pejoratively nicknamed King Harry the Ninth, the "Grand Manager of Scotland" (a play on the masonic office of Grand Master of Scotland), the "Great Tyrant" and "The Uncrowned King of Scotland".[1]

He is commemorated by one of the most prominent memorials in Edinburgh, the 150-foot high, Category A listed Melville Monument at St Andrew Square, in the heart of the New Town he helped to establish.

Dundas was the fourth son of Robert Dundas, of Arniston, the elder (1685–1753), Lord President of the Court of Session, and was born at Dalkeith in 1742. He was educated at the Royal High School, Edinburgh, and the University of Edinburgh.

Becoming a member of the Faculty of Advocates in 1763, he soon acquired a leading position in the Scottish legal system; and he had the advantage of the success of his half-brother Robert (1713–1787), who had become Lord President of the Court of Session in 1760. He became Solicitor General for Scotland in 1766; but after his appointment as Lord Advocate in 1775, he gradually relinquished his legal practice to devote his attention more exclusively to public affairs.

In 1774 he was returned to the Parliament of Great Britain for Midlothian, and joined the party of Frederick North, Lord North; he was a proud Scots speaker and he soon distinguished himself by his clear and argumentative speeches. His name appears in the 1776 minute book of the Poker Club. After holding subordinate offices under William Petty, 2nd Earl of Shelburne and William Pitt the Younger, he entered the cabinet in 1791 as Secretary of State for the Home Department. It was during this period that Dundas, without whose "skillful obstructions the slave trade would have been abolished in 1796, if not 1792", was influential in obstructing the abolition of the Slave Trade.[2]

Appointed Minister for War on the outbreak of the Wars of the French Revolution, he was Pitt's closest advisor and planner for Britain's military participation in the First Coalition. He is largely held responsible for the lack of organization and confused planning in the Flanders Campaign, especially the aborted siege of Dunkirk in September 1793.[3] In November 1793, he provided support to Lieutenant-General Sir Thomas Graham, who was the first cousin of his second wife, in the raising of the 90th Regiment of Foot.[4] Although it was said that he was "so profoundly ignorant of war that he was not even conscious of his own ignorance",[5] he was still responsible for approving the implementation of the three-deep line which, barring Wellington, was used by British commanders through 1815. [6]

From 1794 to 1801 he was War Secretary under Pitt, his great friend. From about 1798 on he pleaded frequently to be allowed to resign on health grounds, but Pitt, who relied on him greatly, refused even to consider it.[7] In 1802 he was elevated to the Peerage of the United Kingdom as Viscount Melville and Baron Dunira, of Dunira in Perthshire. Under Pitt in 1804 he again entered office as First Lord of the Admiralty, when he introduced numerous improvements in the details of the department. Suspicion had arisen, however, as to the financial management of the Admiralty, of which Dundas had been treasurer between 1782 and 1800; in 1802 a commission of inquiry was appointed, which reported in 1805. The result was the impeachment of Dundas in 1806, on the initiative of Samuel Whitbread, for the misappropriation of public money; and though it ended in an acquittal, and nothing more than formal negligence lay against him, he never again held office. This was the last impeachment trial ever held in the House of Lords. Another reason for his retreat could have been Pitt's death in 1806. An earldom was offered in 1809 but declined.

The simple stone to Henry Dundas, in the family vault. Old Lasswade Kirkyard

Lord Melville's first marriage was to Elizabeth, daughter of David Rannie, of Melville Castle, in 1765. Almost all of his wealth (£10,000), as well as the castle, came to him through this marriage but, after leaving Elizabeth in the country residence while he remained in Edinburgh, she committed adultery with a Captain Faukener in 1778. Within days she had confessed by letter to her husband, and approximately a month later they were divorced. She never saw her children again, dying in 1847, aged 97. Henry Dundas, as was the law of the time, kept all of the money and property.[8]

After this divorce he married again, to Lady Jane Hope, daughter of John Hope, 2nd Earl of Hopetoun, in 1793. He died in May 1811, aged 69, and was succeeded in his titles by his son from his first marriage, Robert. The Viscountess Melville later remarried and died in June 1829.

He is buried in a specially built, but very simple, vault, in Old Lasswade Kirkyard, with most of his descendants. 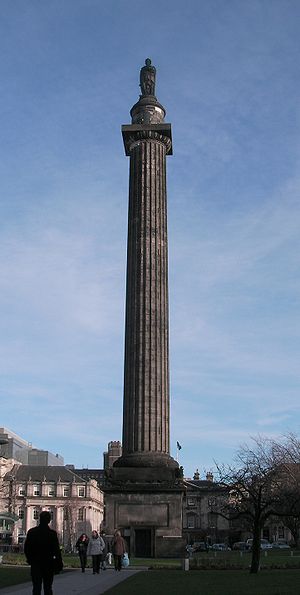 He was friends with John Graves Simcoe, Lieutenant Governor of Upper Canada. Simcoe named the town of Dundas, Ontario, in southern Ontario after him. Owing to the town's short-lived prominence in Upper Canada, many important streets which align with historically important highways leading to Dundas are called "Dundas Street"; these include Dundas Street, Toronto (now Highway 5), and many other streets along Highway 2 and Highway 8. Dundas Street, Hong Kong, was also named for him. In 1792 Dundas County, Ontario, was named in his honour.

Dundas Island was named by Captain George Vancouver in Dundas' honour. Vancouver originally believed it to be one island, Dundas's Island, but it was later determined that it was in fact a small archipelago. Other islands in the group, known as the Dundas Islands, were given the names Melville Island, Baron Island and Dunira Island in respect of Dundas' titles.[9]

A monument to him, modelled loosely on Trajan's Column in Rome, stands in the centre of St Andrew Square, Edinburgh. The cost of the Melville Monument was "met by contributions from officers and men of the Royal Navy."[10] It was designed in 1821 by William Burn, who was advised by Robert Stevenson after residents of the square expressed concern about the adequacy of the foundations to support a column of such height. It cost £8,000.[11] The garden surrounding the Melville Monument was open to the public in 2008.[10] A statue of Dundas, sculpted by Robert Forrest from a model by Francis Chantrey,[12] was added to the top in 1828. The long-time headquarters of the Royal Bank of Scotland, directly to the east, is Dundas House; construction was completed in 1774 for Sir Lawrence Dundas, a relative.[13][14]

A statue (1818) of Dundas stands inside Parliament Hall in Edinburgh against the north wall. This is by Sir Francis Chantrey.

In 1848, John Septimus Roe, the government surveyor (in the then colony of Western Australia), was searching for pastoral land and discovered the area around Norseman which he named Dundas Hills, after the colonial secretary. Gold was discovered there in 1893, the Dundas Field was proclaimed, and the town of Dundas established (ca. 40 km south of Norseman, later abandoned), which eventually led to the present Shire of Dundas.[16]

There is also a monument to him overlooking the scenic village of Comrie in Perthshire, Scotland.

Lord Melville, as First Lord of the Admiralty, is present or a background character in several of Patrick O'Brian's Aubrey-Maturin novels. As a major official favourably disposed to Jack Aubrey, Lord Melville's political interest is often helpful to the captain. O'Brian casts Melville's impeachment for malversation of public monies as a political attack using naval intelligence spending, the details of which cannot be disclosed for security and the safety of intelligence agents—such as Stephen Maturin.

He is also a supporting character in the legal drama Garrow's Law. As a leading figure of the establishment, he is a bitter enemy of the radical hero, William Garrow. He is played by Stephen Boxer. Also, fictional references were made to Sir Henry Dundas in Chapter 24 of L.A. Meyer's third book in the Jacky Faber series, which was titled "Under the Jolly Roger" as well as the former Lord Dundas in Meyer's sixth book, which was titled, "My Bonny Light Horseman". He was portrayed as 'bookish', although a sweet and sincere man otherwise. A reference was made to Henry Dundas and his role in the frustration of the abolition of the Slave Trade in the motion picture Amazing Grace (2006) where he was played by Bill Paterson.[17]