From Infogalactic: the planetary knowledge core
Jump to: navigation, search
For those of a similar name, see Henry Fitzalan-Howard (disambiguation). 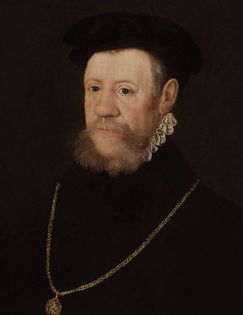 Henry FitzAlan, 19th Earl of Arundel KG (23 April 1512 – 24 February 1580) was an English nobleman, who over his long life assumed a prominent place at the court of all the later Tudor sovereigns, probably the only person to do so.

He was the only son of William FitzAlan, 18th Earl of Arundel, and his second wife Anne Percy, daughter of Henry Percy, 4th Earl of Northumberland, and was named for Henry VIII, who personally stood as his godfather at his baptism.

At 15, Henry FitzAlan became a page at the court of King Henry VIII. When he came of age, in 1533, he was summoned to Parliament as Lord Maltravers, a subsidiary title of his father, who was still alive. He attended the trials of Anne Boleyn and her alleged lover Lord Rochford in May 1536.

In 1540 he was appointed deputy of Calais. He remained there, improving the fortifications at his own expense, until his father's death in early 1544. He returned to England to assume the earldom, and was made a Knight of the Garter. War with France soon brought him back to the continent, where he spent much of 1544. He then returned to England, where the king appointed him Lord Chamberlain.

After King Henry's death in 1547, the Earl was Lord High Constable at Edward VI's coronation. He continued as Lord Chamberlain, and in addition, by the terms of Henry's will, was designated one of the council of 12 assistant executors. Under the new King's uncle, Lord Protector Edward Seymour, 1st Duke of Somerset, Arundel's influence diminished, and he soon became an advocate of Somerset's removal.

Somerset was deposed and sent to the Tower of London in October 1549, with Arundel, Thomas Wriothesley, 1st Earl of Southampton, and John Dudley, Earl of Warwick (later Duke of Northumberland) among the leaders of the new governing group. In early 1550 Warwick removed Arundel and Southampton, who were religious conservatives, from office. Arundel was placed under house arrest under dubious charges of peculation. Within a few months he was cleared of the charges, but the experience pushed him into the camp of the Duke of Somerset, who had been released from the Tower and readmitted to the Privy Council. When Somerset was again arrested in 1551, Arundel was implicated in some of his plots, and was himself arrested and imprisoned for a year. He was eventually pardoned and returned to his place on the Council in May 1553.

King Edward's health was seriously declining, and on 21 June 1553 Arundel was among those who signed Edward's letters patent which conferred the succession on Lady Jane Grey. After the King's death, and after Northumberland had left London, however, together with the Earl of Pembroke, he worked for the proclamation of Mary I on 19 July 1553. Taking the great seal and a letter of submission by the Council, he then rode off to Framlingham, where Mary was staying.

At Mary's coronation, Arundel was for the second time High Constable, and was then appointed Lord Steward of the royal household. He served in various roles in her court, being, for example, one of the nobles who received her husband Philip II of Spain when he landed at Southampton.

Although Elizabeth I did not trust him, he was too powerful to be slighted or ignored, and so he was retained in his various offices when she ascended the throne. For the third time, he had a high place at a royal coronation.

Arundel took part in some of the many conspiracies of Elizabeth's reign, and, while he was at times placed under house arrest, he retained his properties and titles. Coaches were introduced into England from France by Henry Fitzalan,who travelled widely on the Continent in the mid-1560s.[1]

Henry Fitzalan, 19th Earl of Arundel, was first married to Katherine Grey, daughter of Thomas Grey, 2nd Marquess of Dorset, and Margaret Wotton. By her he had three children:

His second wife was Mary, daughter of Sir John Arundell of a prominent Cornish family, and widow of Robert Radcliffe, 1st Earl of Sussex. They had no children.

Arundel's portrait was painted several times, including once by Hans Holbein and by Hans Eworth.[2]