Field Marshal Henry Hardinge, 1st Viscount Hardinge GCB, PC (30 March 1785 – 24 September 1856) was a British Army officer and politician. After serving in the Peninsula War and the Waterloo Campaign he became Secretary at War in Wellington's ministry. After a tour as Chief Secretary for Ireland in 1830 he became Secretary at War again in Sir Robert Peel's cabinet. He went on to be Governor-general of India at the time of the First Anglo-Sikh War and then Commander-in-Chief of the Forces during the Crimean War. 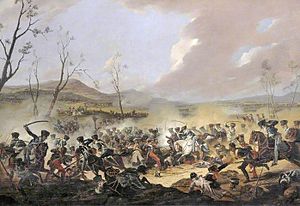 The Battle of Orthez, at which Hardinge commanded the Portuguese brigade, during the Peninsular War

When war broke out again in 1815 after Napoleon's escape from Elba, Hardinge returned to active service as a brigadier.[3] He was present at the Battle of Ligny on 16 June 1815, where he lost his left hand by a shot, and thus was not present at Waterloo two days later.[3] Wellington presented him with a sword that had belonged to Napoleon.[3] He was promoted to brevet colonel on 19 July 1821[11] and to major-general on 22 July 1830.[12]

Error creating thumbnail: File with dimensions greater than 25 MP
Statue of Hardinge in Calcutta, circa 1860.

In May 1844 he succeeded Lord Ellenborough as Governor-General of India.[18] He was advanced to Knight Grand Cross of the Order of the Bath on 1 July 1844.[19] Following the death of Maharajah Ranjit Singh tribal war broke out and the first Sikh War ensued in 1845.[3] Hardinge, waiving his right to the supreme command, offered to serve as second in command under Sir Hugh Gough.[3] At the Battle of Mudki on 18 December 1845 Gough commanded the right flank and Hardinge commanded the left flank.[20] After further British successes at the Battle of Sobraon on 10 February 1846, the Battle of Ferozeshah on 21 December 1845 and the Battle of Aliwal on 28 January 1846, Hardinge concluded the campaign with the Treaty of Lahore with Maharajah Duleep Singh on 9 March 1846[21] and the Treaty of Amritsar with Maharajah Gulab Singh on 16 March 1846.[22] He was created Viscount Hardinge of Lahore and of King's Newton in Derbyshire on 7 April 1846.[23] 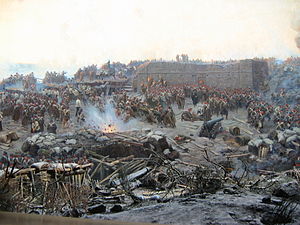 The Crimean War, the conduct of which Hardinge directed as Commander-in-Chief of the Forces

Hardinge returned to England in 1848, and became Master-General of the Ordnance on 5 March 1852;[24] he succeeded the Duke of Wellington as commander-in-chief of the British Army on 28 September 1852.[25] While in this position he had responsibility for the direction of the Crimean War, which he endeavoured to conduct on Wellington's principles — a system not altogether suited to the changed mode of warfare.[3] He was promoted to brevet general on 20 June 1854[26] and field marshal on 2 October 1855.[27] A commission was set up to investigate the failings of the British military during the Crimean campaign.[3] As Hardinge was delivering the report of the commission to Queen Victoria and Prince Albert, he collapsed with a stroke.[3] Albert helped him to a sofa, where despite being paralysed on one side, he continued to deliver his report, apologizing for the interruption.[28]

Hardinge resigned his office of commander-in-chief in July 1856, owing to failing health, and died on 24 September 1856 at South Park near Tunbridge Wells.[3] There is a memorial to him at St John the Baptist, Penshurst.[31]

In 1821 he married Lady Emily Jane, seventh daughter of Robert Stewart, 1st Marquess of Londonderry.[3] His elder son, Charles Stewart (1822–1894), who had been his private secretary in India, was the 2nd Viscount Hardinge. The younger son of the 2nd Viscount, Charles Hardinge (b. 1858), became a prominent diplomatist, and was appointed Viceroy of India in 1910, being created Baron Hardinge of Penshurst.[32]