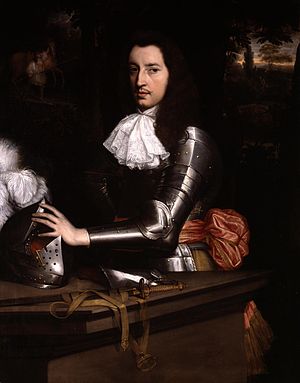 The Duke of Norfolk, by John Michael Wright

He had previously been created 1st Baron Howard of Castle Rising in 1669 and 1st Earl of Norwich in 1672, on the latter occasion obtaining the restoration of the office of Earl Marshal of England to him and to his family. There had been near unanimity in the House of Lords in persuading King Charles II to restore the Dukedom of Norfolk in 1660; but since the 5th Duke was insane, it was felt desirable to summon his brother to the Lords in his own right.

His career as Duke began inauspiciously when he announced that he had married Jane Bickerton, his mistress of many years: this caused a violent family quarrel and he went abroad for a time.

In January 1678, he took his seat in the House of Lords, but in August the first development of the Popish Plot was followed by an Act for disabling Catholics from sitting in either house of Parliament. He would not comply with the oath and withdrew to Bruges for three years. There he built a house attached to a Franciscan convent and enjoyed freedom of worship. He later gave away the greater part of his library, grounds, and rooms to the Royal Society, and the Arundelian marbles to Oxford University. He was presented as a recusant at Thetford assizes in 1680, and felt obliged to return to England to answer the charge, which was not pursued. He remained in England long enough to sit as a peer at the trial for treason of his close relative William Howard, 1st Viscount Stafford, a fellow victim of the Popish Plot; unfortunately for Stafford, he had quarreled with most of his relatives, including Norfolk, and with the exception of the future 7th Duke of Norfolk all the Howard peers voted Guilty.

With the waning of the hysteria he felt it safe to return home. John Evelyn in his diary for 9 May 1683 records visiting him to discuss buying some of his artworks, and gives the diarist's very low opinion of the Duchess. From Evelyn's description it is clear that the Duke then had an impressive collection of "cartoons and drawings of Raphael and the Great Masters". 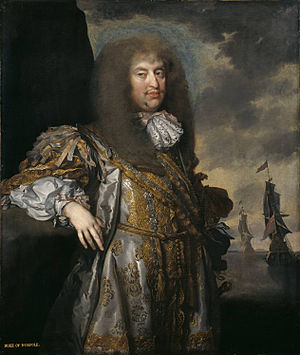 Portrait of Henry Howard by Gilbert Soest, c. 1670-1675. This portrait was once part of the Lenthall collection and is now owned by the Tate Gallery.

About 1652, Howard married Lady Anne Somerset, daughter of Edward Somerset, 2nd Marquess of Worcester, and Elizabeth Dormer. They had at least two children:

His second wife was Jane Bickerton. She had been his mistress for many years prior to the marriage in 1676 or 1677, and its announcement caused a violent quarrel with his heir. They had four sons, all of whom died childless, and three daughters:

The peerages created for him died out with his grandson the 9th Duke in 1777, though the current Baron Mowbray descends from the 9th Duke. The 10th and later Dukes of Norfolk, who have inherited the associated peerages and office of Earl Marshal, descend from his brother Lord Charles Howard of Greystoke.