Henry Howard, Earl of Surrey, KG (1516/1517 – 19 January 1547), was an English aristocrat, and one of the founders of English Renaissance poetry. He was a first cousin of both Anne Boleyn and Catherine Howard, the second and fifth wives of King Henry VIII.

He was the eldest son of Thomas Howard, 3rd Duke of Norfolk, and his second wife, the former Lady Elizabeth Stafford (daughter of Edward Stafford, 3rd Duke of Buckingham), so he was descended from kings on both sides of his family tree: King Edward I on his father's side and King Edward III on his mother's side. He was reared at Windsor with Henry VIII's illegitimate son Henry FitzRoy, 1st Duke of Richmond and Somerset, and they became close friends and, later, brothers-in-law upon the marriage of Surrey's sister to Fitzroy.[1] Like his father and grandfather, he was a brave and able soldier, serving in Henry VIII's French wars as "Lieutenant General of the King on Sea and Land." He was repeatedly imprisoned for rash behaviour, on one occasion for striking a courtier, on another for wandering through the streets of London breaking the windows of sleeping people.[2] He became Earl of Surrey in 1524 when his grandfather died and his father became Duke of Norfolk.[3] 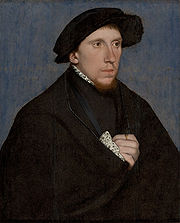 In 1532 he accompanied his first cousin Anne Boleyn, the King, and the Duke of Richmond to France, staying there for more than a year as a member of the entourage of Francis I of France. In 1536 his first son, Thomas (later 4th Duke of Norfolk), was born, Anne Boleyn was executed on charges of adultery and treason, and the Duke of Richmond died at the age of 17 and was buried at one of the Howard homes, Thetford Abbey. In 1536 Surrey also served with his father against the Pilgrimage of Grace rebellion protesting against the Dissolution of the Monasteries.[3]

He and his friend Sir Thomas Wyatt were the first English poets to write in the sonnet form that Shakespeare later used, and Surrey was the first English poet to publish blank verse (unrhymed Iambic pentameter) in his translation of the second and fourth books of Virgil's Aeneid. Together, Wyatt and Surrey, due to their excellent translations of Petrarch's sonnets, are known as "Fathers of the English Sonnet". While Wyatt introduced the sonnet into English, it was Surrey who gave them the rhyming meter and the division into quatrains that now characterizes the sonnets variously named English, Elizabethan or Shakespearean sonnets.[4][5]

Henry VIII, consumed by paranoia and increasing illness, became convinced that Surrey had planned to usurp the crown from his son Edward. The King had Surrey imprisoned—with his father—sentenced to death on 13 January 1547, and beheaded for treason on 19 January 1547 (his father survived impending execution only by it being set for the day after the king happened to die, though he remained imprisoned). Surrey's son Thomas became heir to the Dukedom of Norfolk instead, inheriting it on the 3rd Duke's death in 1554.

He is buried in a spectacular painted alabaster tomb in the church of St Michael the Archangel, Framlingham.

He married Frances de Vere, the daughter of John de Vere, 15th Earl of Oxford, and Elizabeth Trussell. They had two sons and three daughters:

Henry Howard, Earl of Surrey was portrayed by actor David O'Hara in The Tudors, a television series which ran from 2007 to 2010.[6]