Henry I, Count of Anhalt 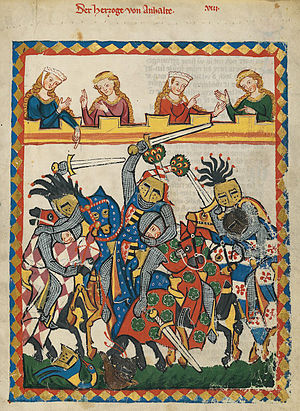 Portrait of Henry I in the Codex Manesse.

He was the oldest son of Bernhard III, Duke of Saxony and Count of Anhalt, by his wife Brigitte, a daughter of Canute V of Denmark. After the death of his father in 1212, the surviving sons of the late duke divided his lands according to the laws of the House of Ascania: Henry received Anhalt and the younger Albert the Saxon duchy. In 1218 Henry was raised to the rank of prince (German: Fürst).

Henry's most famous ministerialis (bondsman) was Eike von Repgow from Reppichau, who compiled the Sachsenspiegel, the most important legal code of the German Middle Ages.

Henry also was a renowned Minnesänger. At the beginning of 14th century, five of his Minnelieder (love songs) were copied into the Codex Manesse, an exceptionally beautiful collection. In this source, he is erroneously referred to as a "duke".

Before his death, Henry divided Anhalt between his sons: Henry inherited Aschersleben, Bernhard received Bernburg, and Siegfried took Zerbst. His other surviving sons, Hermann and Magnus, were ordained priests.

Ca. 1211 Henry married Irmgard (b. ca. 1197 – d. ca. 1244), daughter of Hermann I, Landgrave of Thuringia and second cousin of Frederick II, Holy Roman Emperor through her paternal grandmother Judith of Swabia. They had eleven children: