Henry I, Duke of Brabant

He was possibly born in Leuven (Louvain), the son of Count Godfrey III of Louvain and his wife Margaret, daughter of Duke Henry II of Limburg. His father also held the title of a Landgrave of Brabant, Duke of Lower Lorraine and margrave of Antwerp. Henry early appeared as a co-ruler of his father. In 1179 he married Matilda of Boulogne (Matilda of Flanders), daughter of Marie of Boulogne and Matthew of Alsace and on this occasion received the County of Brussels from his father. He acted as a regent while Count Godfrey III went on a pilgrimage to Jerusalem from 1182 to 1184.

In 1183 Henry took the title of a Duke of Brabant. Upon the death of his father in 1190, King Henry VI confirmed the elevation of Brabant, while he de facto abolished the Duchy of Lower Lorraine by creating the empty title of a Duke of Lothier. Duke Henry sought to expand his power and soon picked several quarrels with the Count Baldwin V of Hainaut. He also was in opposition to the German king (Emperor from 1191) when his brother Albert of Louvain was elected Bishop of Liège and murdered shortly afterwards.

Further conflicts with Duke Henry III of Limburg and Count Otto I of Guelders followed, before in mid-1197 Henry of Brabant joined the Crusade of Henry VI as one of the leaders. In October of the same year he took part in the recapture of Beirut and, then moved to Jaffa with the Crusaders: however, before reaching the city he got news of the death of the King of Jerusalem, Henry II of Champagne, and he returned to Acre. Here he acted as regent until the arrival of the new King, Amalric II.

Back in Germany after the emperor's death in September 1197, Duke Henry supported the election of the Welf candidate Otto IV, the fiancé of his daughter Marie, who rivalled with the Hohenstaufen scion Philip of Swabia. He fought against Philip's seconders Count Dirk VII of Holland and Count Otto of Guelders, however, he switched sides in 1204, when he and King Philip II of France backed Philip against Otto. In 1208, after the assassination of Philip, Henry was proposed as successor by King Philip II. In the war which followed, he finally reached a reconciliation with Emperor Otto IV. Together they fought against King Philip in the 1214 Battle of Bouvines, but the two were defeated.

In 1213, Duke Henry also suffered a heavy defeat against the Bishopric of Liège in the Battle of Steppes. From 1217 to 1218 he joined the Fifth Crusade to Egypt. 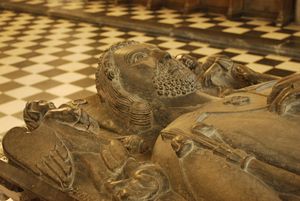 Under Henry I, there was town policy and town planning. His attention went out to those regions that lent themselves to the extension of his sovereignty and in some locations he used the creation of a new town as an instrument in the political organisation of the area. Among the towns to which the duke gave city rights and trade privileges was 's-Hertogenbosch.

In 1235 the Hohenstaufen emperor Frederick II appointed Henry to travel to England to bring him his fiancée Isabella Plantagenet, daughter of King John Lackland. Unfortunately, Henry fell ill on his way back and died at Cologne. He was buried in St. Peter's Church at Leuven where his Late Romanesque effigy can still be seen.

Denier 'au cavalier' with Duke Henry galloping to right; struck in Antwerp after 1210

Henry had six children by his first marriage with Mathilde of Boulogne:

His second marriage was at April 22, 1213 in Soissons to Marie, princess of France, daughter of King Philip II of France. They had two children: